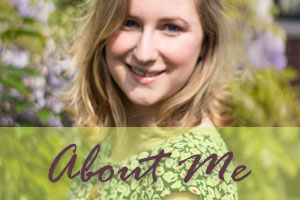 I’m Samantha and I run The Happy Coeliac! I was diagnosed with Coeliac Disease in 2011, and soon after I started blogging to help get me through what was a difficult transition for me, both mentally and physically.

Although I have always loved baking , I was a very fussy eater as a child. In my late teens and early twenties my palate drastically changed and I became interested in all sorts of foods I’d previously spurned. Of course, the irony being that once I was diagnosed with coeliac disease my diet became restricted once more.

Nowadays I love coming up with new gluten-free recipes, visiting restaurants with gluten-free options and trying out the latest products. In 2015 I started a low-carb diet (<50g a day) to try and help with some of the symptoms of PCOS. It seems to work for me so I’m likely to start blogging about my low-carb adventures as well! I’m originally from London but in 2013 I moved to Haarlem, The Netherlands, where I can often be found cycling around on a rickety bike, playing with my cats and mangling the Dutch language.

Please feel free to get in touch by e-mail about anything you like. It’s nice to hear from people around the world and I’ll do my best to answer you.

What is coeliac disease?

Coeliac (US: celiac) disease is an autoimmune disease where the body starts to attack itself when gluten is eaten. It is not an allergy or sensitivity. There is currently no cure for coeliac disease, but rather the disease is managed by removing gluten from the diet

What are the symptoms of coeliac disease?

What happens if you eat gluten?

Again, symptoms vary wildly. Some people will react straight away, others might not notice, but the internal damage will be the same. For me personally (since you asked) I will usually get immediate stomach pain, followed by bloating. In a few hours I’ll be screaming in pain on the toilet. Once the worst of that is over, I will start to develop symptoms such as mouth ulcers, swollen glands, flu-like symptoms for a few days, headaches and depression.

What happens if you keep eating gluten?

If I were to carry on eating gluten, I would be at an increased risk for bowel and stomach cancer, osteoporosis, anaemia and other deficiencies, infertility, and other autoimmune diseases such as type 1 diabetes and thyroid disease.

Gluten is a sticky protein found in wheat, barley, rye, spelt, and all their derivatives (triticale, kamut, bulgar etc). Therefore, anything you cook or bake with these grains will contain gluten. Normally flour, bread, pasta, cakes, biscuits, pizza and crackers contain gluten.

What is a gluten-free diet?

A gluten-free diet is any diet which doesn’t feature any gluten-containing grains. Substitutes can be made from maize, rice, buckwheat, potato or tapoica – which are all gluten-free. There are many, many gluten-free grains out there.

Why is everyone getting so excited about going gluten-free?

The gluten-free diet has become very popular in the last few years, partly due to certain celebrities such as Miley Cyrus, Gwyneth Paltrow, Zooey Deschanel and others going gluten-free. There are some who claim it helps them loose weight, but this has not been proven and it is thought that gluten-free products may be higher in sugar and calories than normal products.

Coeliac disease sounds pretty crappy – why are you happy?

You’re right, it’s a horrible disease and one that you have to think about every day of your life. I chose to call this blog “The Happy Coeliac” because I wanted to remind myself of a positive mindset every time I logged in to post. It is easy to get depressed on this diet – especially if your friends and family aren’t supportive – but we must keep trying to be positive because after all, we are the lucky ones. The vast majority of coeliacs are undiagnosed which means their health is at risk – the fact that I have been diagnosed is reason enough to be happy.