After the epic gluten-free food fest that was my week in Prague, my day spent in Nuremberg (Nürnberg) was a little bit more subdued. German cuisine is not, on the whole, very gluten-free friendly, but there are a couple of gems I felt I needed to share just to show you that us coeliacs can eat there!

That’s right, the traditional gingerbread-esque Christmas treat is naturally gluten-free and available all year round. I bought mine from a market stall on the Hauptmarkt. 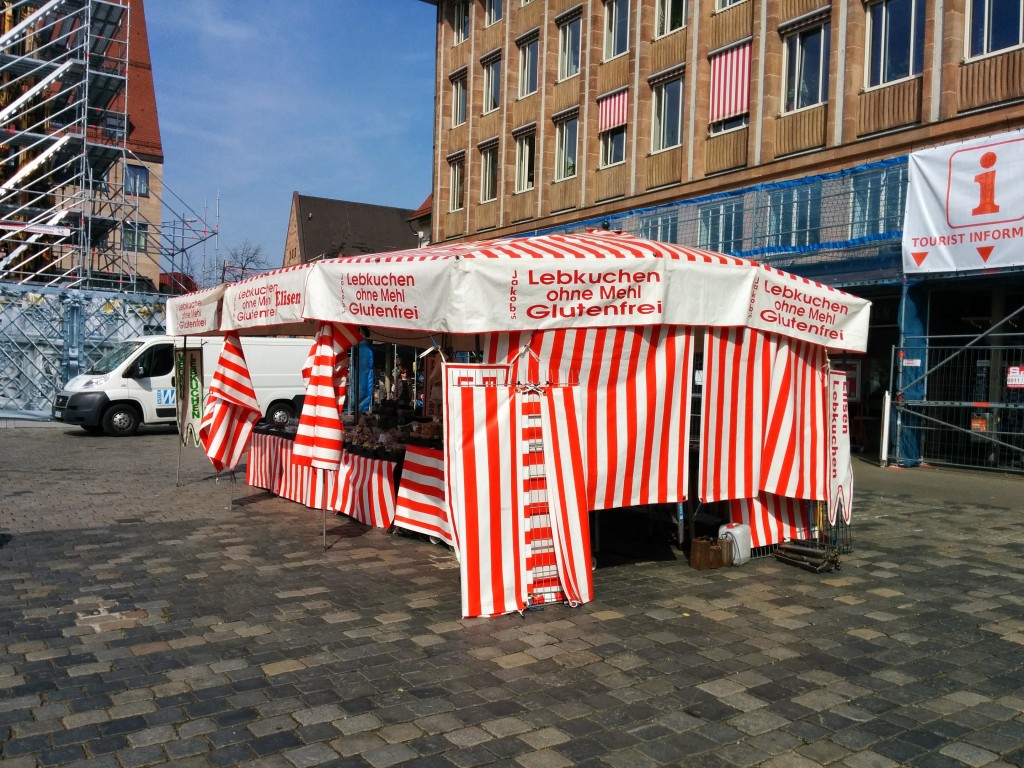 Unsurprisingly “glutenfrei” means gluten-free, you’ll see “ohne Mehl” around quite a bit as well which means “without flour”. Be careful though, as they are baked on a sort of rice paper wafer thingy, some of which are made from wheat, so always ask.

The guy was super enthusiastic about his lebkuchen, although he didn’t speak too much English (my German got me through). He did sell some which weren’t gluten-free, but these were clearly marked and he was very happy to help. 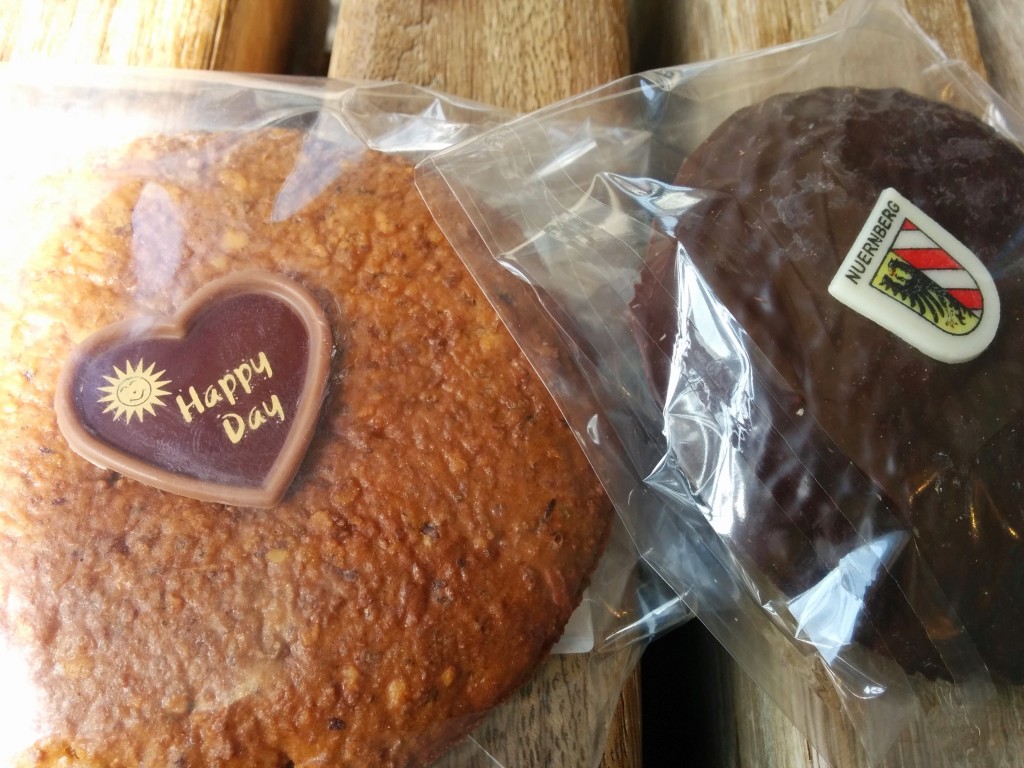 Happy day indeed. I also bought some as a thank you to my friends who were hosting us and their verdict was “these are ok – but ours are better”. Luckily they gave me the recipe so I hope to share that with you soon.

My search for gluten-free restaurants in Nuremburg was a little bit difficult, and I didn’t see much evidence of restaurants and cafés catering for special diets at all. I remembered that Bratwurst Röslein was listed as somewhere that could accommodate coeliacs. I really just wanted a little something for lunch, and this place was probably overkill, since it’s in a rather touristy location, the servers are dressed up in dirndls and whatnot and it’s a bit overpriced. 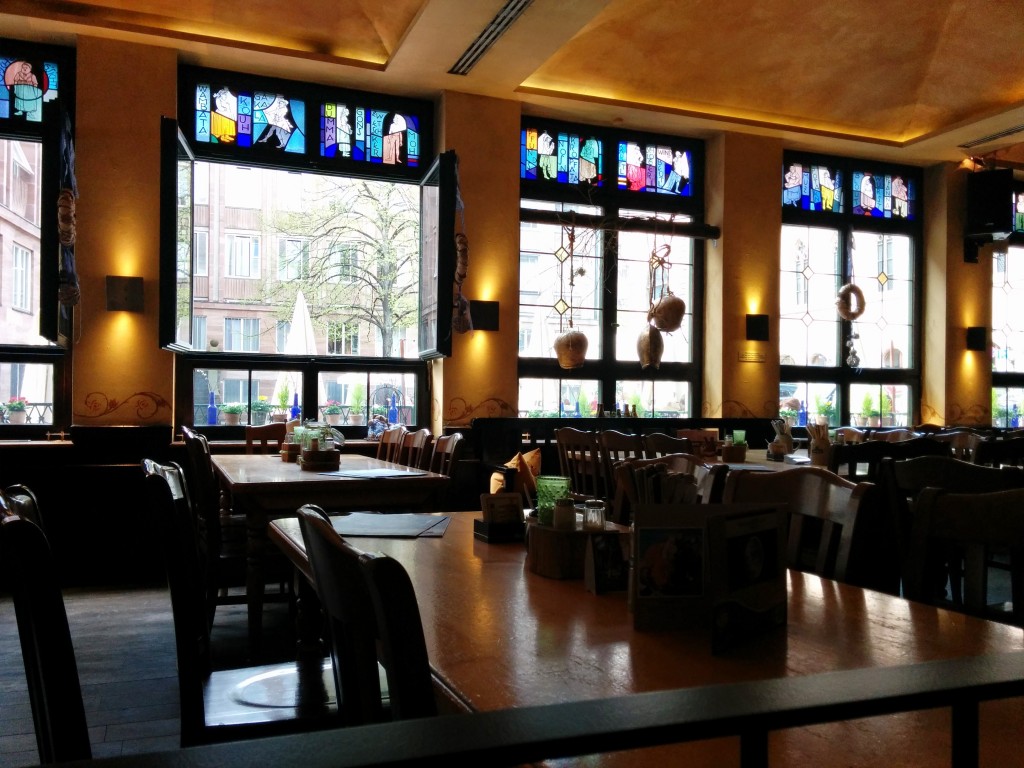 The advantage was that the Nürnberger sausages are gluten-free and very delicious! My attempts at speaking German (after learning Dutch intensively for a while) were pretty laughable, but I got there with my Nederdeutsch.

Her: (looks at me like I am insane. Penny eventually drops) “Ja, ok, kein Problem.”

Luckily for me, they seemed clued up on what was in what (although the allergy information card confused me a great deal) and I ordered the sausages with some potatoes and a green salad. And an apfelschorle, because I am in Germany, dammit! 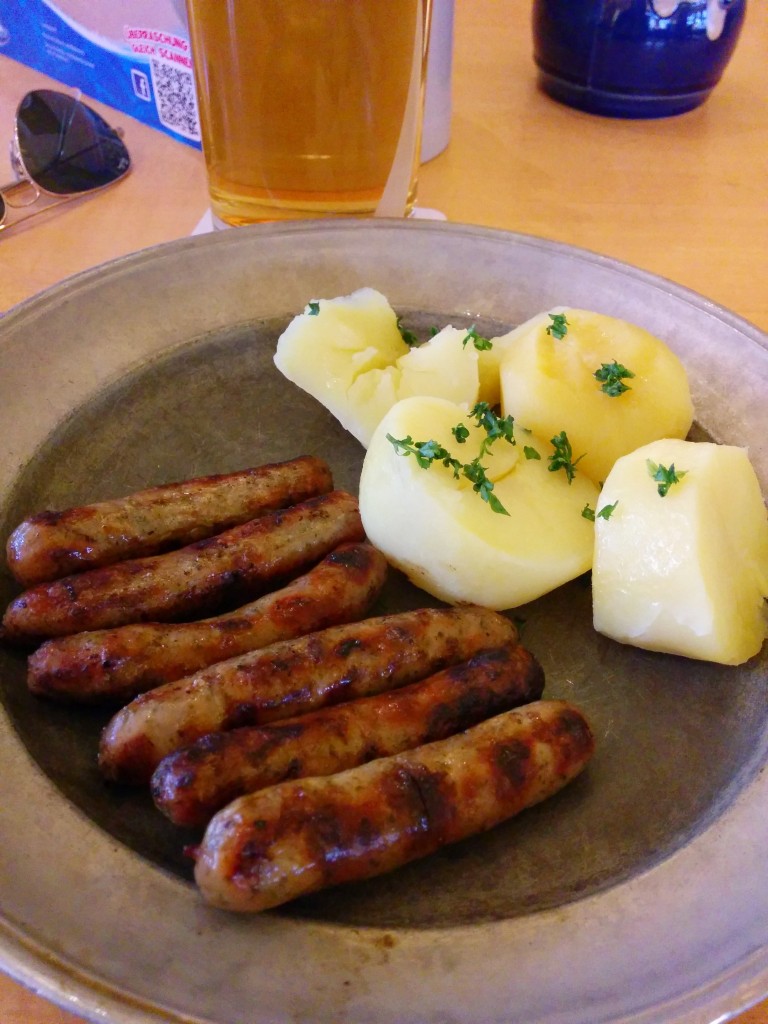 If I had known that the drink and salad would cost €6 between them I would have committed the ultimate German sin and asked for tap water.

As I was paying by card she asked if I wanted to tip on my card and I was so confused/bamboozled by speaking German again that I left a way too generous tip because I just wanted it all to be over. I literally based my tip on the only number I could think of at that time and was horrified when I still said “twee”. She looked at me in a concerned way and slowly said “zwei?” as if talking to a child. Despite being rather out of pocket after that meal, I seem to have reached a point in both languages where Germans think I’m Dutch and Dutchies think I’m German and nobody suspects the awful truth.

Nuremberg seems to be better equipped for gluten-free self-catering than it is for eating out. As I was searching in vain for a suitable place for lunch, I came across a place called Reformhaus on the Hauptmarkt, which has a great selection of Schär products as well as a few interesting looking brands I hadn’t heard of before. I ended up buying some gnocchi for dinner and some pretzels to get me through the day… in case I hadn’t found somewhere to eat.

I also ventured into the Edeka in Fürth, which is just outside Nuremberg. Edeka is probably comparable to Sainsbury’s, and they had a massive gluten-free section. Again, it was largely Schär products (they accounted for about 1/2 of the gluten-free products there) but I was rather impressed at the range and also this awesome gluten fact sheet. 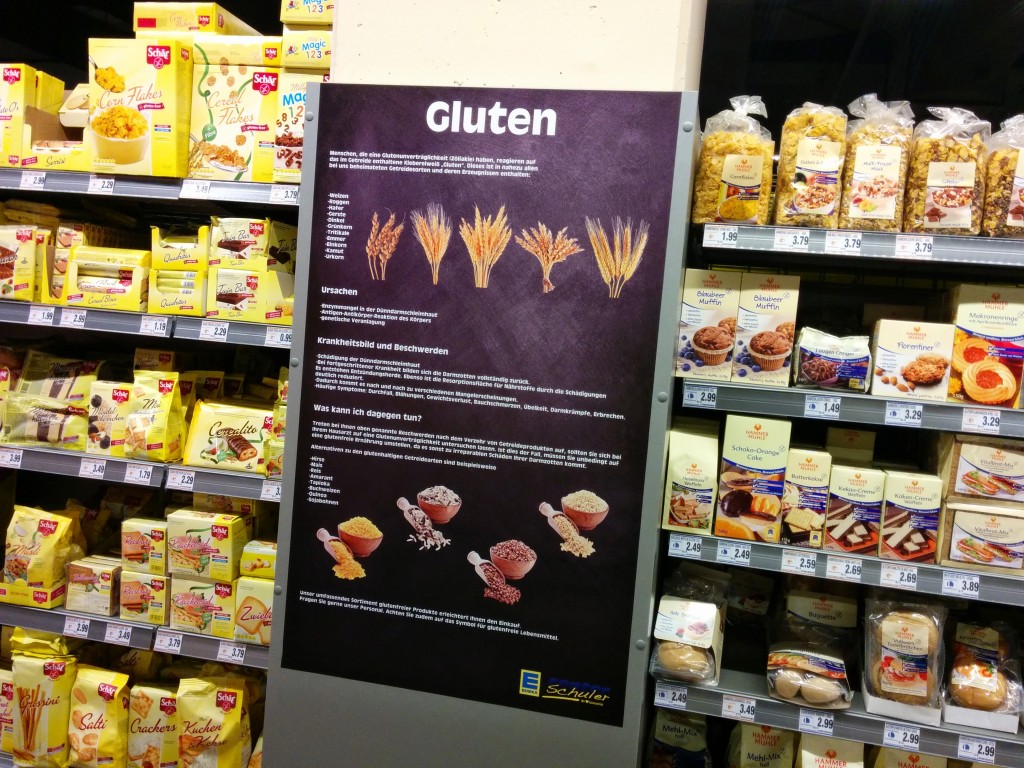 These should be mandatory in every gluten-free aisle worldwide! Think of how helpful it would be for friends and family who don’t really understand what we can eat.

If you are self-catering, eating gluten-free in Nuremberg should be no problem at all, as I found large and well-stocked gluten-free sections almost everywhere I went. Eating out was a little more of a problem, but most sausages are gluten-free, and places seemed clued up on allergens, even if they didn’t offer much.

« What it’s REALLY like having coeliac disease
Review: “Coeliac Disease: What you need to know” by Alex Gazzola »