I discovered Alriso (website unfortunately in Czech) quite by accident on my first day in Prague.

I was in full tourist-mode, snapping away merrily at the beautiful streets, when I noticed a restaurant whose menus had a clever numbering system to show allergens. This sort of thing is actually rather widespread in Prague and it seemed to work well. 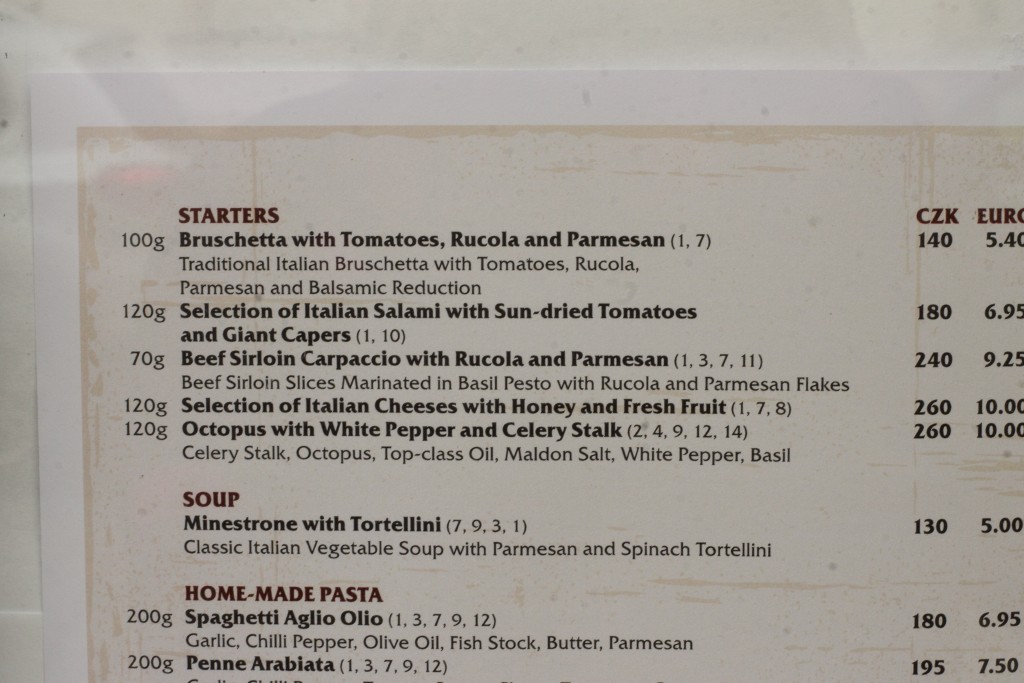 Lazily strolling past the excellent menu (however excellent it was, most dishes contained gluten, and some numbers were infuriatingly out of order), I did, however, do a double take at the next restaurant that came along. There were several prominent crossed grain symbols all over the outside of the place! 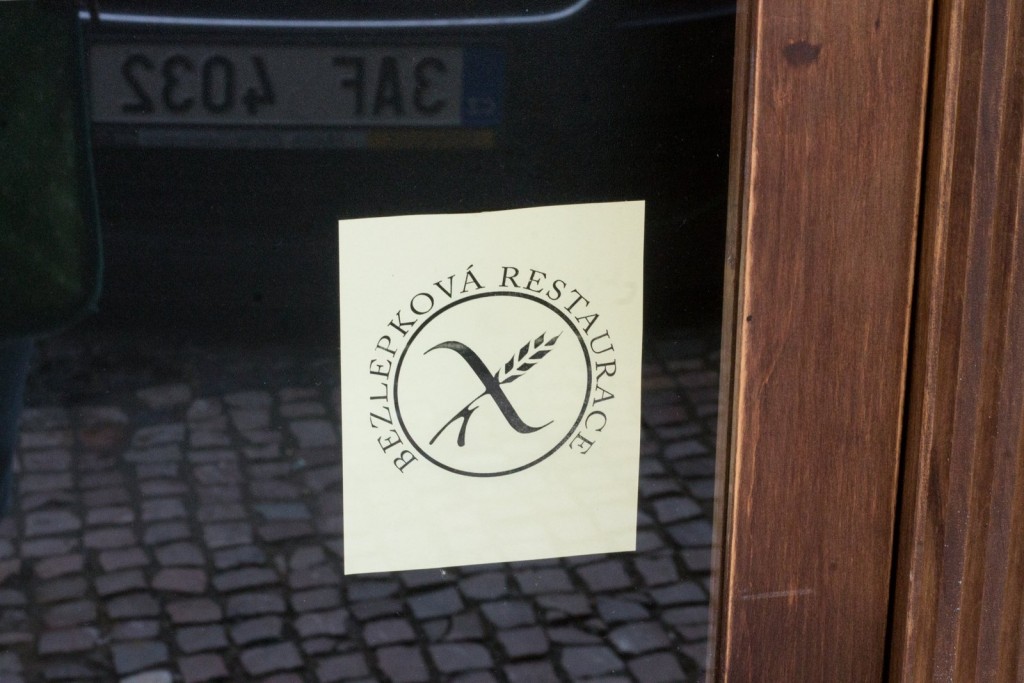 As I was already en route to another restaurant, I made a mental note to come back another day. The tough life of a food blogger on holiday. 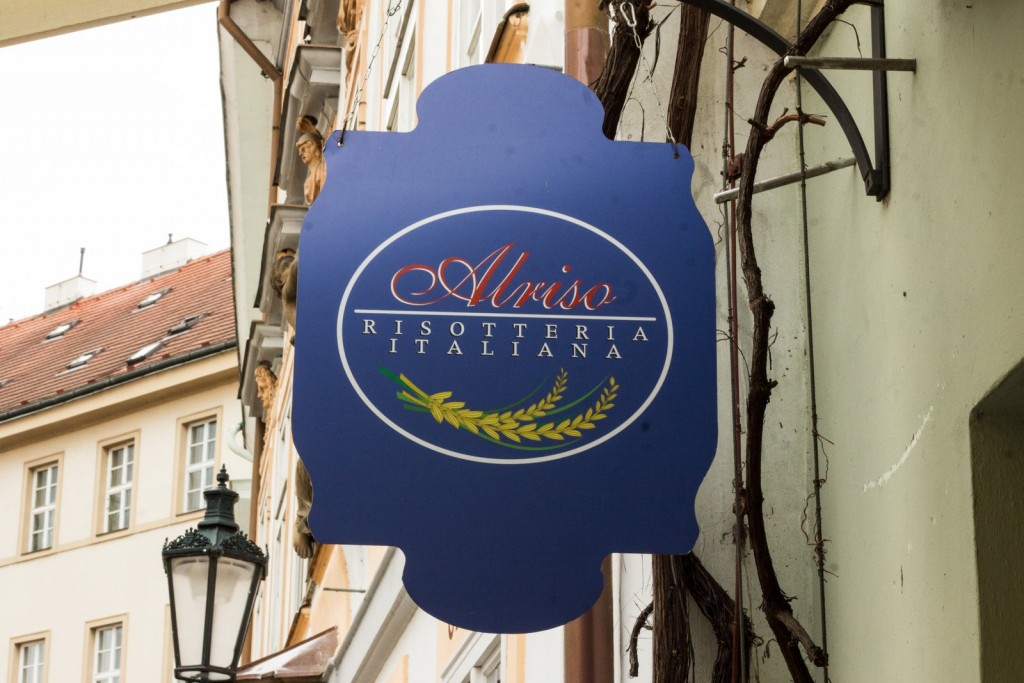 We returned one evening, and were greeted by a very friendly waiter. The place itself seems like it doesn’t seat more than 10 people, but there appeared to be a larger seating area downstairs as well. We were one of two couples in there for dinner. Overall the atmosphere was quiet and intimate, but it seemed just as good for a romantic dinner as for a dinner with the kids (you know, depending on your kids…)

I asked about the menu and what was gluten-free, and the response from the junior waiter was, “errr…” to which his supervisor piped up and assured us that “EVERYTHING is gluten-free”. Yes, that’s right. Everyhing in the damn restaurant is gluten-free.

In case you don’t know Italian, “riso” means rice, and they sure do love their rice in this place. Everything is made from rice – they have rice bread, rice pasta, rice pasta napkin decorations (see below) and… gluten-free tiramisu made with “rice lady fingers”!!! (*faint*) 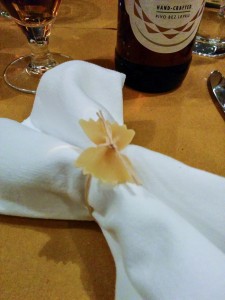 Naturally, I ordered a gluten-free beer to make my decision easier. I’m so used to picking from just a couple of options that having a whole menu to choose from is really overwhelming.

The beer of choice at Alriso was Celia, and I was pleased to see it came in half litre bottles, not the skinnier 330ml bottles you see in the UK. My boyfriend is pretty keen on Celia, so he had some too. 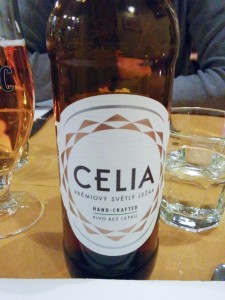 To start, I had the rice polenta. I was curious to try it as I had only ever heard of polenta from corn before, but apparently rice polenta is really a thing in Italy. Either way, it was good. A bag of rice bread was dumped on our table (“a little present for you”)… I may have squealed in delight. It was a little like sourdough, quite tough but with a good flavour. 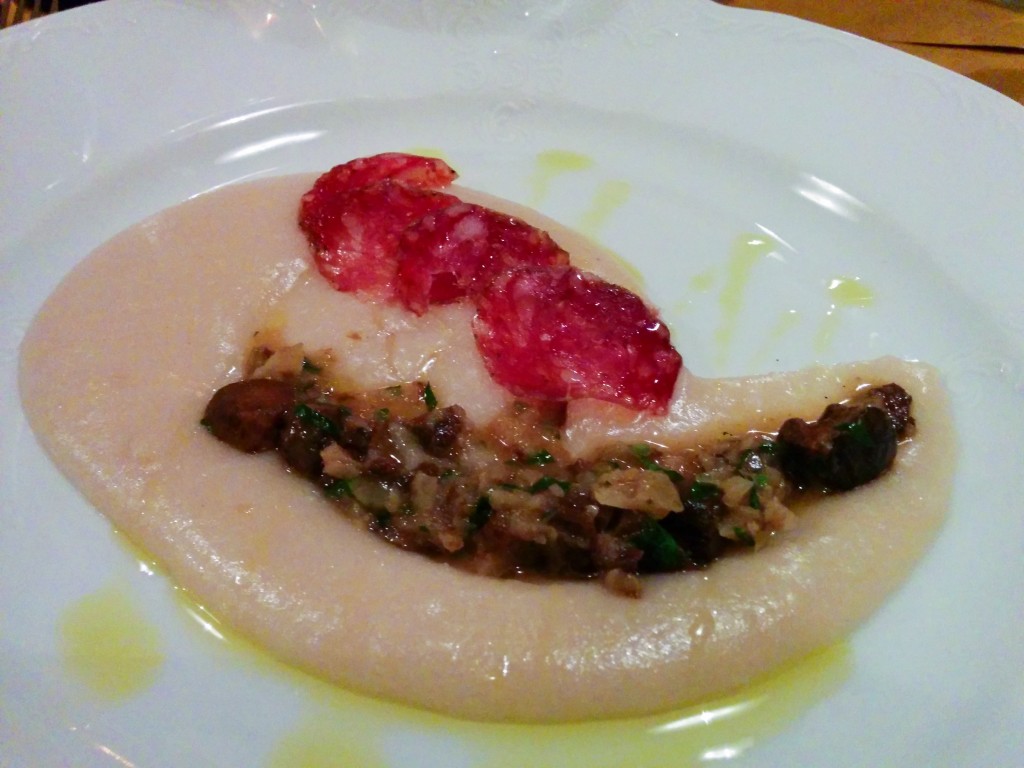 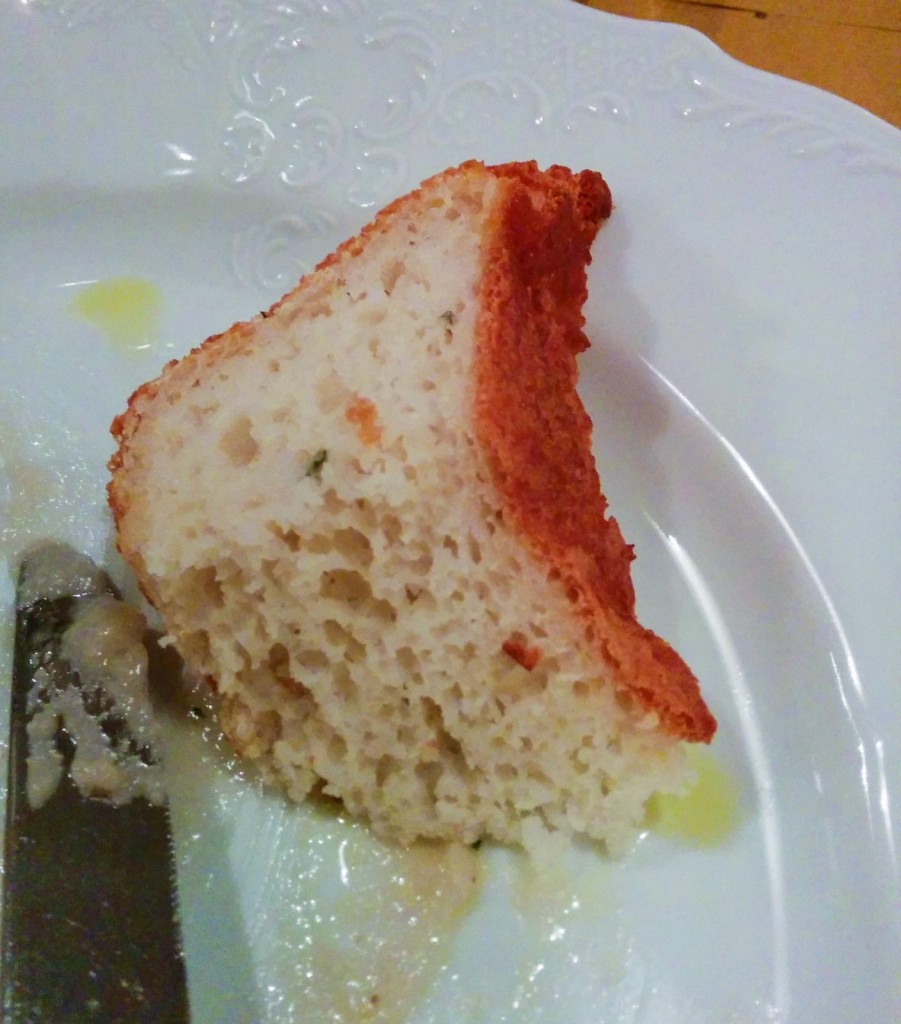 For my main, I had a spaghetti carbonara (I just HAD to try their pasta). They had quite a few risottos which also looked nice, but I was keen to see how their rice pasta fared. Often people tell me that gluten-free pasta “falls apart”, and usually this is because they are eating rice pasta. 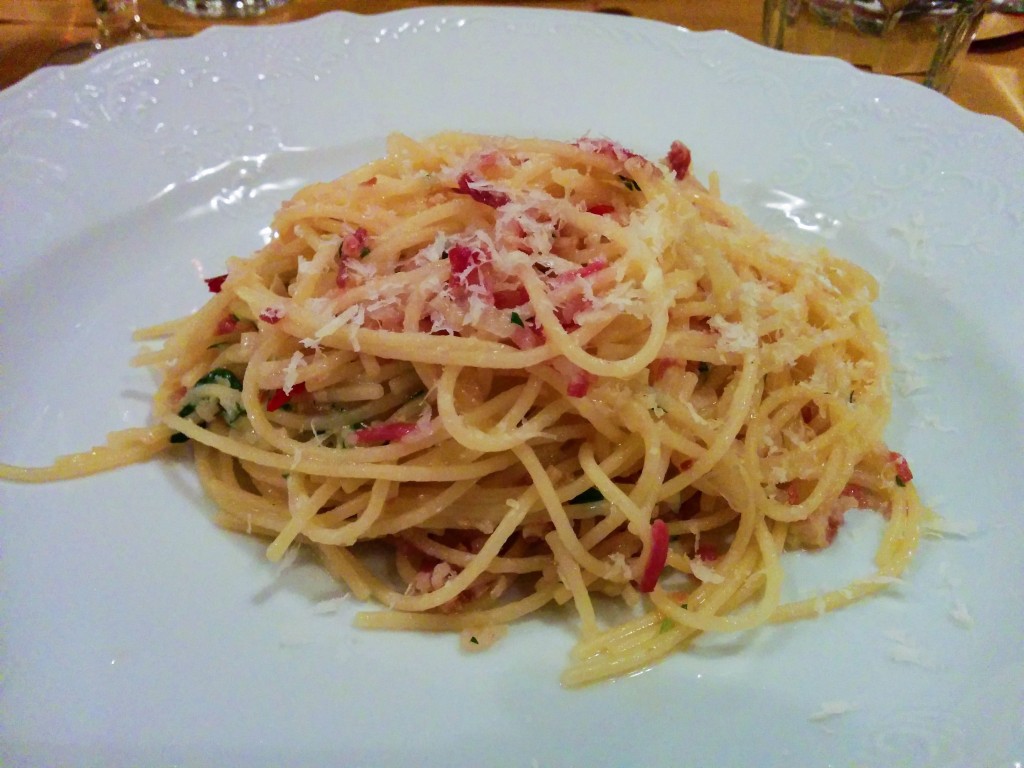 This spaghetti stayed together very well, although it had a very distinct consistency. This was not trying to emulate normal spaghetti though, it was its own trendsetter. Yes, it was also, in fact, delicious, and heavy on the garlic, which I loved.

Of course I went for the tiramisu for dessert. The only gluten-free tiramisu I have ever had is my own recipe, which is quite a bit of work, although I find it delicious. So for someone to make it for me felt like the ultimate in luxury. 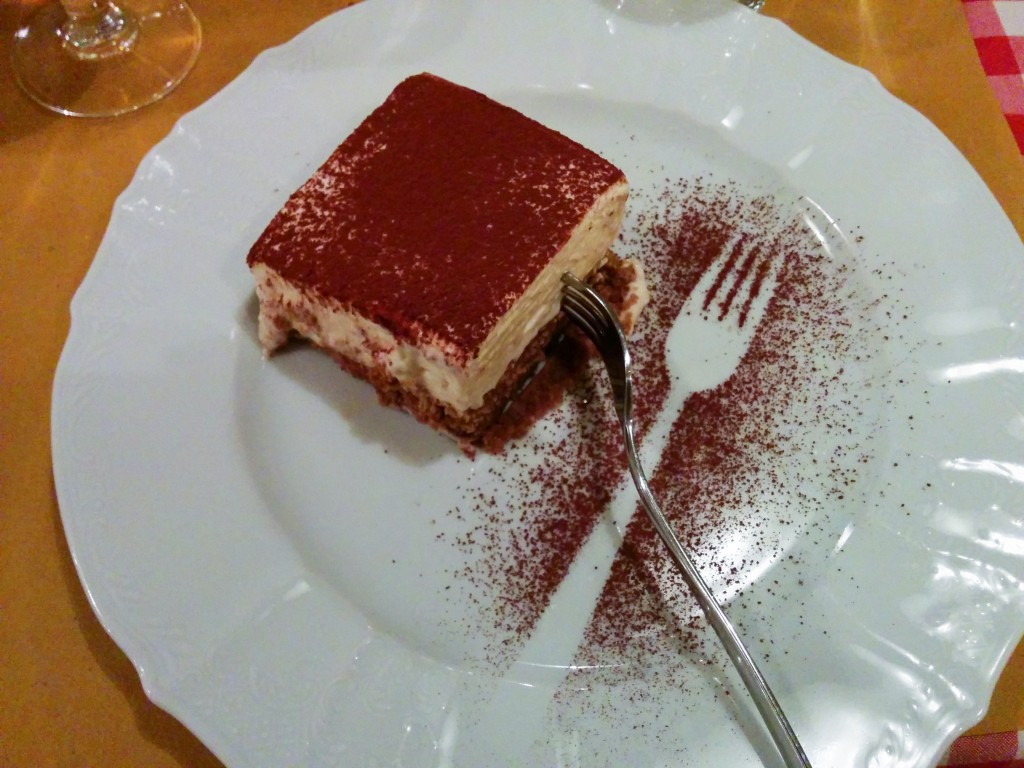 So pretty, how could I refuse? I was totally stuffed by this point, but determined to eat the dessert. (That sentence pretty much summarises my stay in Prague)

Compared with European prices, this place was very good value. My main was I think around 160czk (about £4.20). My partner’s steak bumped up the bill considerably (I believe the steak came to about 50% of the final bill). It’s not the cheapest place you could eat in Prague, but the quality of the food is excellent and the fact that everything is gluten-free is a real novelty. 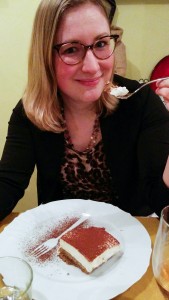 My verdict is – just like Svejk Restaurant U Karla – not to be missed while in Prague!