Whenever I travel, I try to make researching viable gluten-free options near where I am staying a priority. So when we booked 2 days in Copenhagen for our 5 year anniversary trip, I searched and searched online for safe places for me to eat during our short stay.

The fact that this was a struggle didn’t fill me with much enthusiasm, and I landed in Copenhagen with a list of about 6 places to eat (spread across breakfast, lunch and dinner). Sometimes it’s hard to gauge how far away places are in a city you don’t know, so our first night in Copenhagen led us wandering around the touristy/shopping streets, looking for somewhere – ANYWHERE – that could give us something to eat. This is not recommended in general. Remember, Piss Poor Planning = Piss Poor Performance.

We finally found a “steak and veggies” place called RizRaz which was basically a buffet restaurant where they cook your steaks to order. There were several gluten-free items in the buffet, but I was a little concerned with cross contamination, although everything had its own serving spoon. Imagine my surprise when I asked the waitress if it would be possible to cook me a small portion of potatoes separately only to be told a flat out “No. We don’t have time for that”. If we had not been so ravenously hungry, I would have walked out at that point. Imagine the Shreddies character shouting “HUNGER STRIKES!” and playing the drums on our bellies with a spoon, and that just about sums up our state. In the end I did not get glutened, and the steak was pretty good, but I wasn’t best pleased with the attitude among staff.

Breakfast was not much better. I had found Cafe Bang & Jensen online as a place that could do gluten-free, but when we turned up at 8:30 we were told that the kitchen did not open until 10:00 but we could help ourselves to the buffet. I told the woman “I have to eat gluten-free”, to get the response “Then I suggest you don’t eat the bread” with more than a hint of sarcasm. Again, I was pretty taken aback by this attitude, but my breakfast options were limited at the time so I went over to see what was available. Excluding the bread, there were eggs, cheese, meats, fruit, yoghurt and juices. At 60Kr a head (about £6.50), it wasn’t cheap, but in Copenhagen you’ll be lucky to get a breakfast much under that anyway. We ate as much as we could, and moved on.

Luckily for us, my dad had recommended a place that turned out to be right across the street from our own hotel, so we decided to book it for dinner after a long day at Tivoli. Frk. Barners Kælder was a welcome refuge after the disappointing experiences of the previous 24 hours. Situated less than 5 minutes walk from the main train station, it specialises in typical Danish cuisine, and has a pleasant outside terrace. 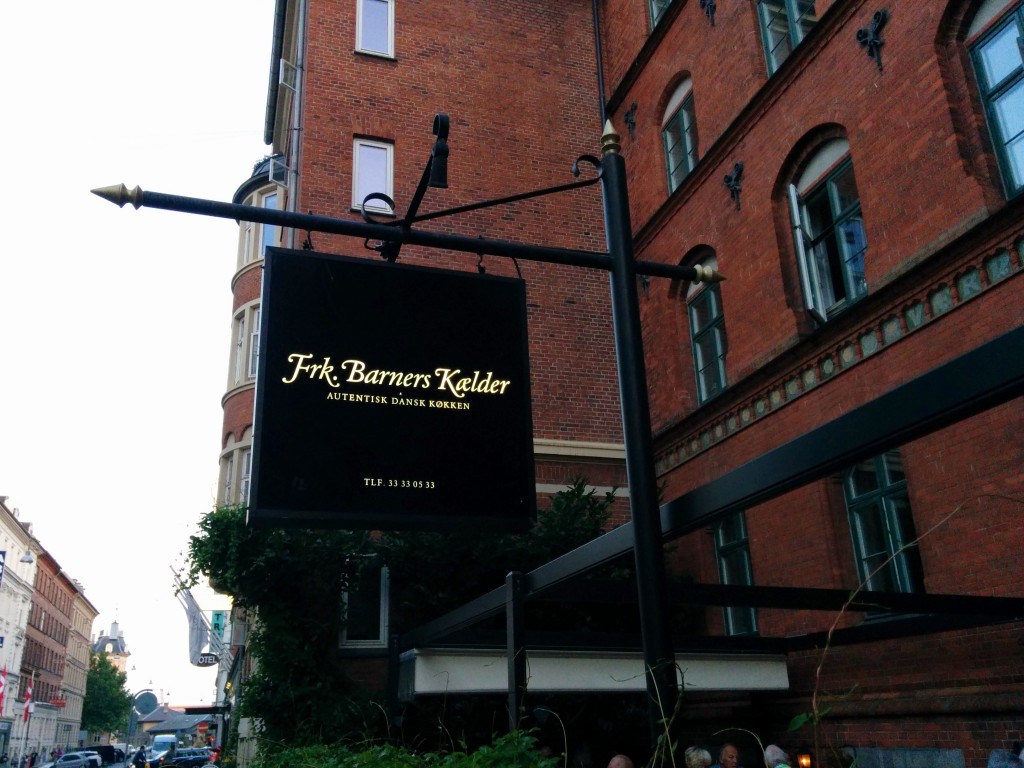 More importantly, they seem to actually understand the needs of the coeliac. I had mentioned it when I booked that day (booking recommended), and they had briefly mentioned the options that could be done gluten-free, which seemed plentiful enough. When I ordered, I explained my needs to the waitress, and she sent over another waiter who helped me through the ordering process.

I ordered a herring platter for starters. Herring is typically eaten with rye bread – as an open sandwich, with a knife and fork – and although the waiter was keen to stress that any other way would not be “typically Danish”, he had some leftover cold potatoes from lunch he could slice up and I could have the herring with that – the “Swedish way”, he said, with more than a little distaste on his face. I should point out that the distaste seemed to be directed at the Swedish in general, rather than at my particular dietary needs. 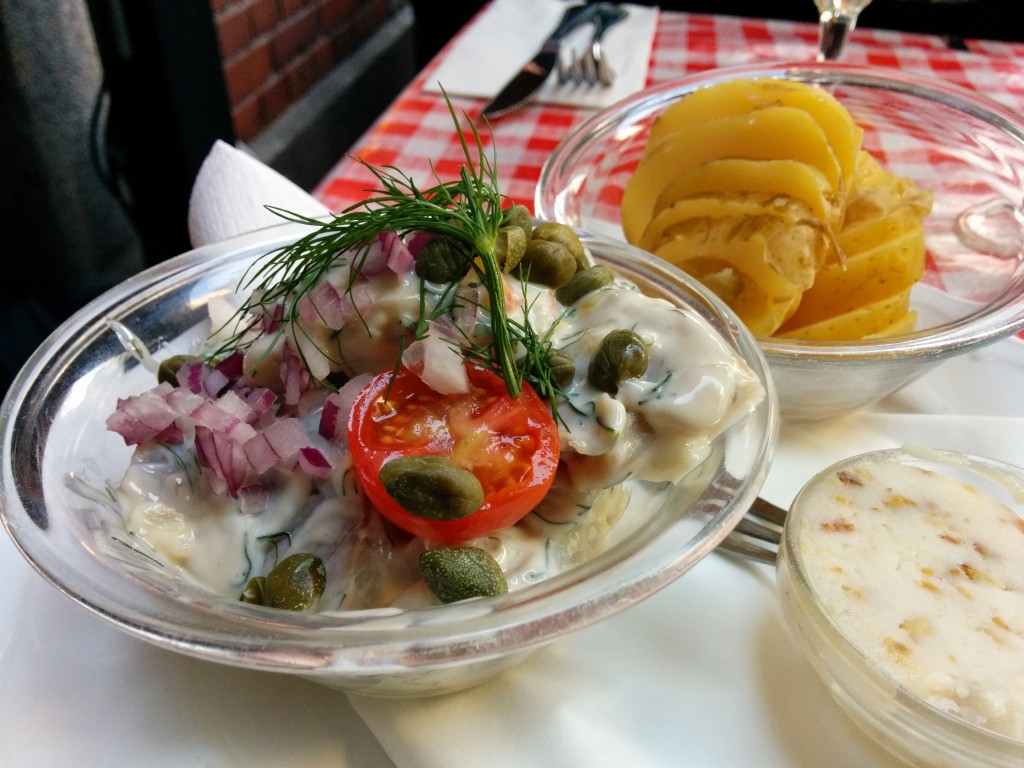 Herring, sliced cold potatoes, and fat. I declined to eat the fat, since I didn’t have any bread to spread it on 😉

When he brought the herrings out, he said somewhat nervously, “I’ve just remembered the herrings are marinated in akvavit, which is made from barley… is that still ok?”. I assured him that the distillation process removed the gluten and gobbled up my giant bowl of herrings.

The Dutch are apparently famous for their herrings, but nothing beats the Danish style, raw, pickled, marinated in alcohol. I have such cravings for these, and think I need to find some sort of Scandinavian shop where I can buy them here in Holland, because they are extremely healthy as well.

Once the starter had been brought out, my trusty gluten-free-friendly waiter said to me that he’d found one last gluten-free beer down in the cellar and would I like it? I think you could guess my answer! 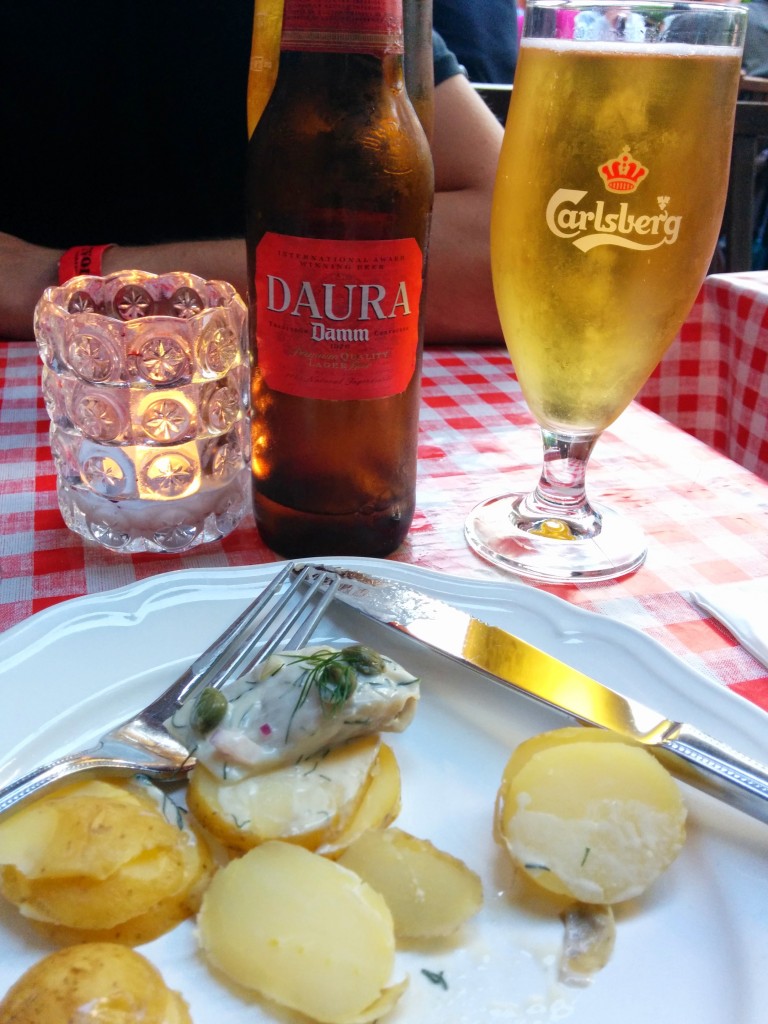 Herrings are technically best drunk with snaps (akvavit), but I wasn’t in the mood to drink 45% alcohol, as I had an important party the next day 😉

For my main course I ordered a steak along with mashed AND baked potatoes. I wouldn’t say steak is typically Danish, but it was the nicest option out of the main courses I could have. And boy was it nice. 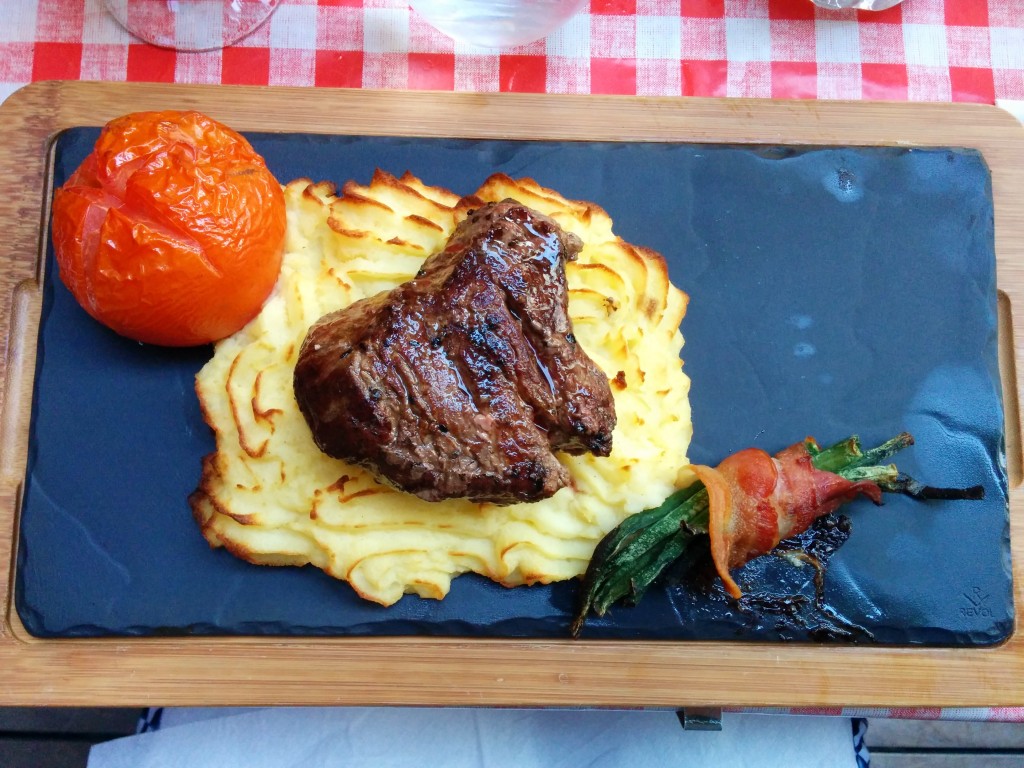 Honestly, it was cooked to absolute perfection. The Danish really know how to cook their meat! 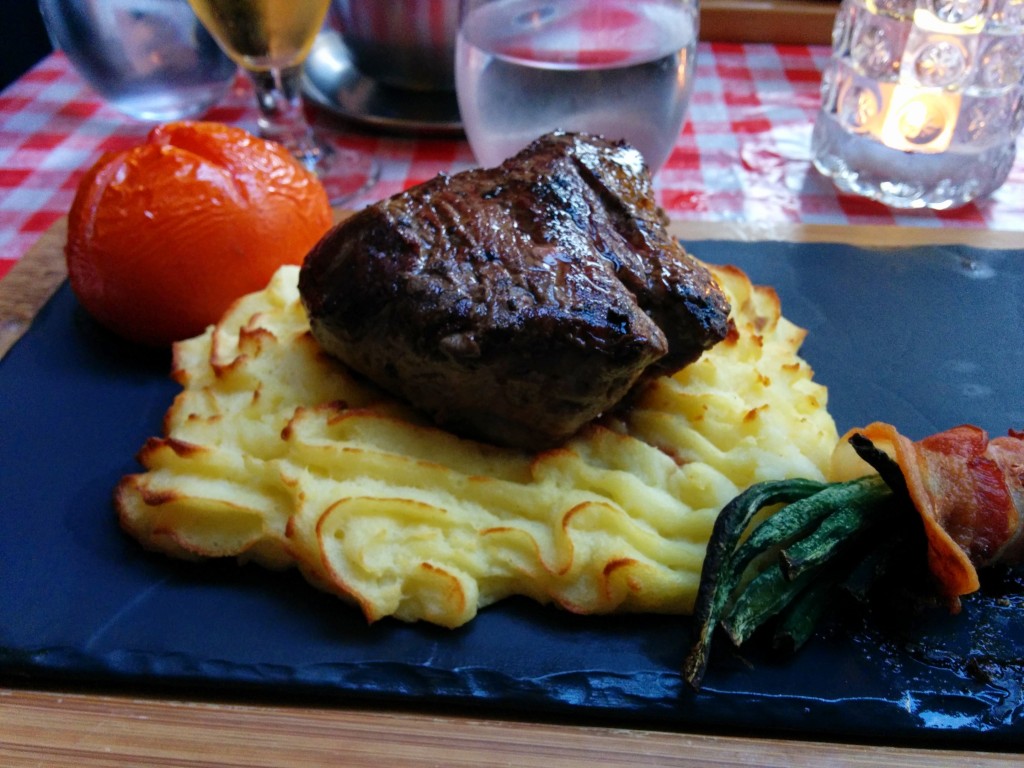 After the herrings and steaks we couldn’t eat another bite, so headed back to Tivoli to enjoy the evening atmosphere.

Tivoli itself has a wide variety of restaurants inside, several of which looked like they could cater for gluten-free needs (at the very least, there is a Wagamama inside). It’s a beautiful place anyway, and well worth a visit. We did the rides in the afternoon, paid a little extra to be able to go out and re-enter, and came back in the evening. 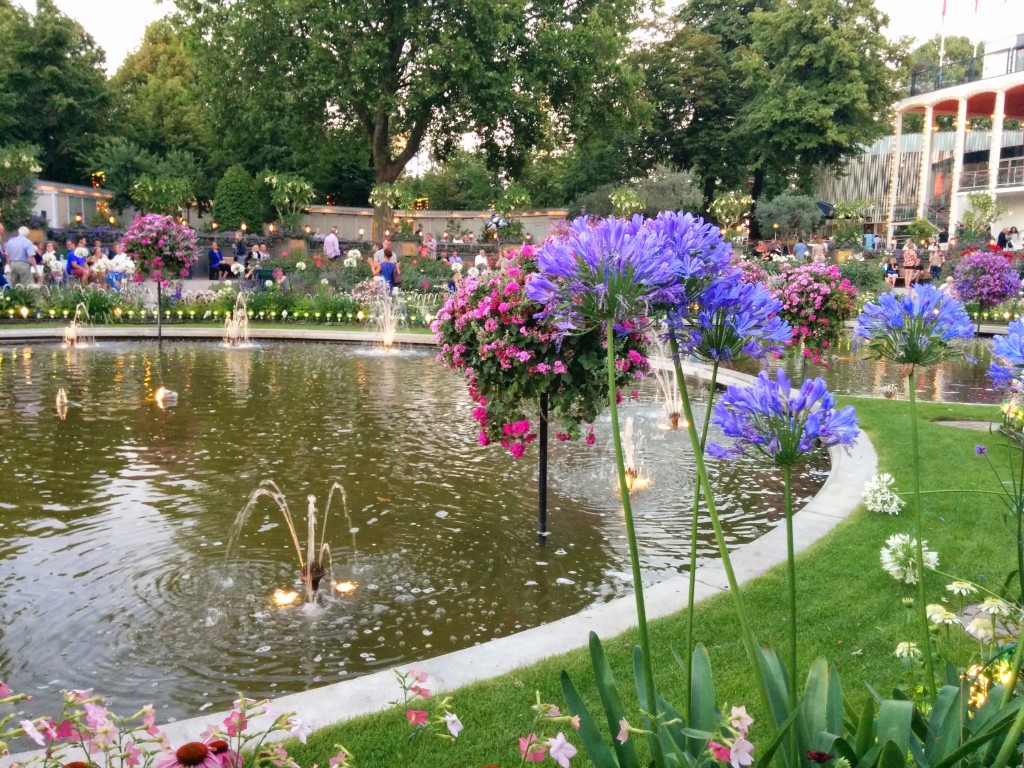 Tivoli gardens in the evening

The rides are open until late, but after our giant meal, the only ride we could go on was a very gentle ride which involved shooting at diamonds in a mine cart. 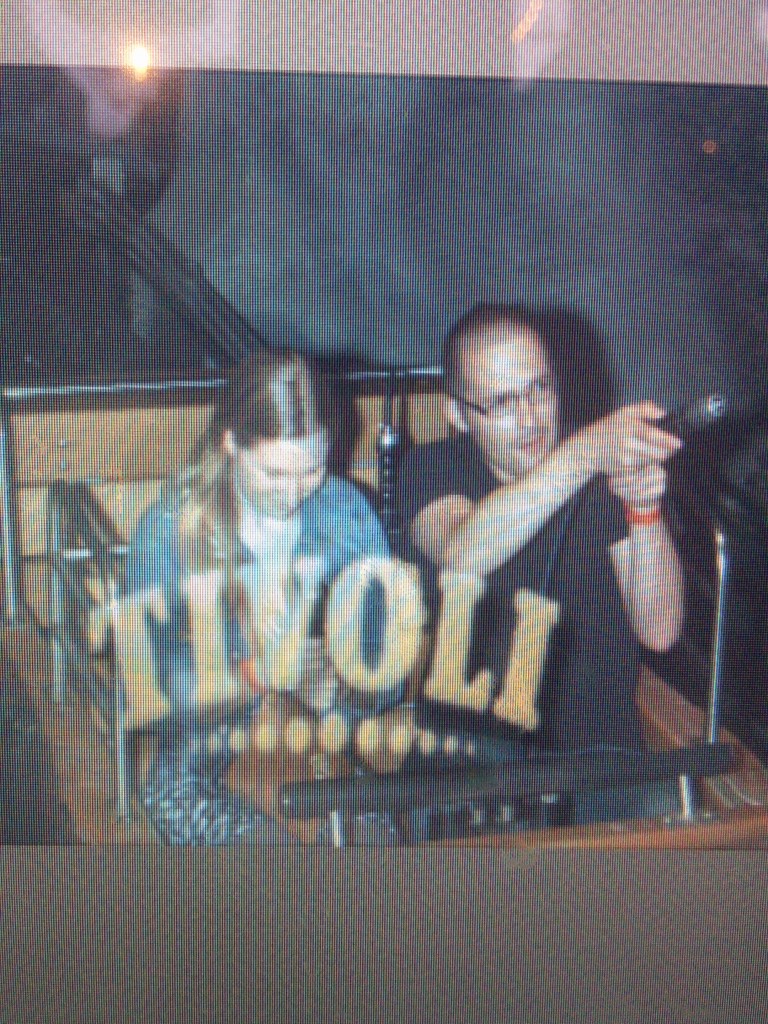 No, I was not checking my phone, I was trying to make my pew pew thingy work!

But once it started to get dark at around 10pm, the lights all over the park created the most magical atmosphere. Even the ducks liked it. 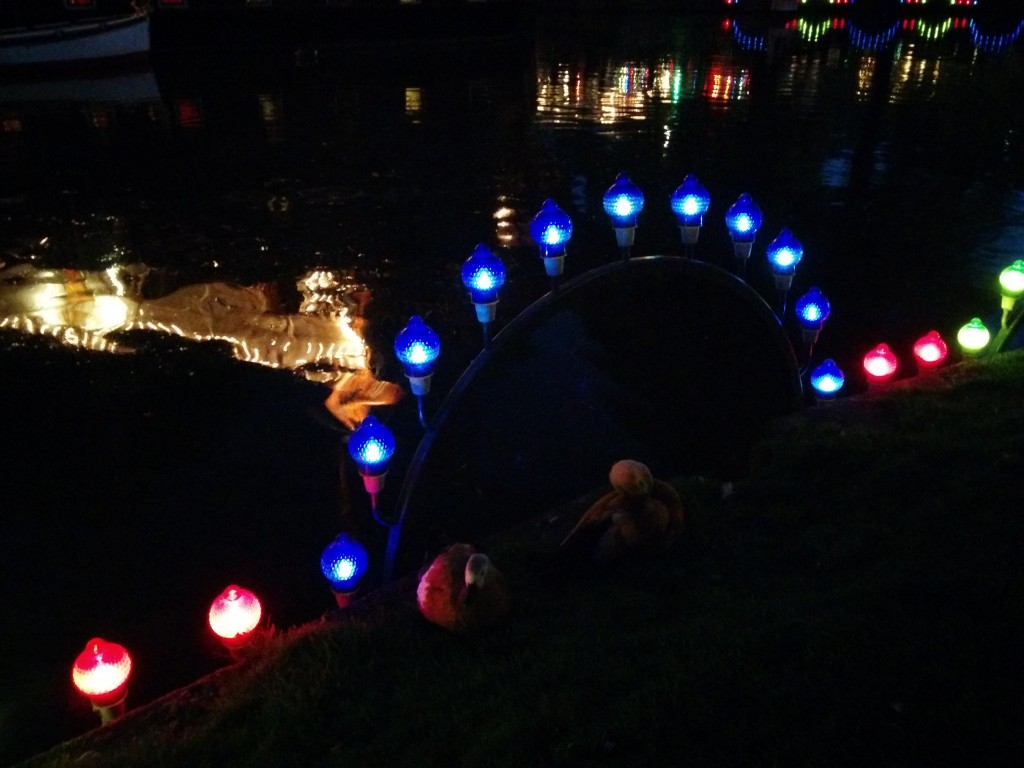 Copenhagen is a beautiful city but I would recommend planning ahead if you need to eat gluten-free. Two of the places I had found online which offered gluten-free options – Palaeo and 42Raw – turned out to be a bit too far to walk from where we were staying. The main shopping streets are awash with junk food, but if you head up to the beautiful Nyhavn area (pictured below), the restaurants up there are a bit posher and look a bit more promising for gluten-free food, but don’t hold your breath for anything more exciting than meat and potatoes. 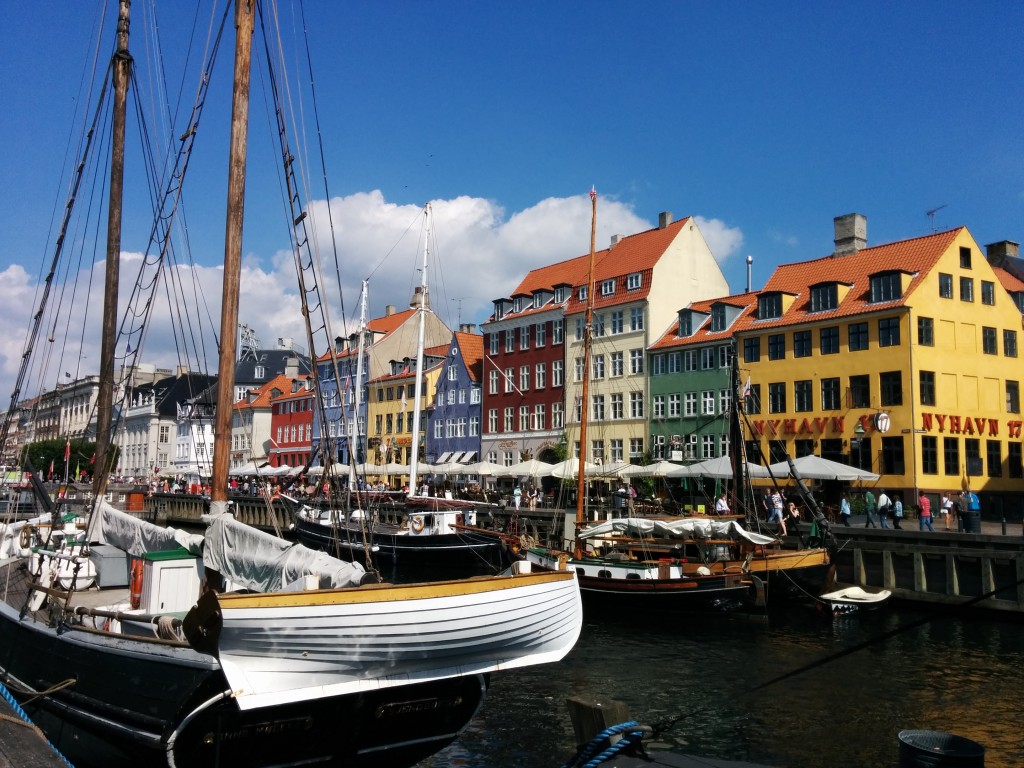 « How to make gluten-free tiramisu
Glutenfreewebshop.com is holding a gluten-free baking competition in Amersfoort! »