I’ve been missing out on a lot of the fun gluten-free events since I moved to Holland, but after receiving an “anytime” invitation to come and check out Vozar’s, a new gluten-free restaurant in Brixton, I managed to arrange a visit when I was last in London this January.

Vozars is “the first café, deli and restaurant in London that is fully wheat and gluten free”, which for a coeliac is a very exciting prospect indeed. It is the brainchild of Martin Vozar and Nick McNally, who are both involved with Celia lager as well, and thus have many years experience between them both in the restaurant and gluten-free industries.

Vozar’s has the feel of a pop-up restaurant, situated in the tiny former house of the WAG cafe (in fact, they still sell their cakes and rolls there). When I say tiny, it could probably fit no more than 15 inside and another 8 on the outside. The location in Brixton Village is vibrant and energetic, and you could pretty much eat any world cuisine you wanted without having to walk more than 100 metres. But for the coeliacs among us, the main attraction is the entirely gluten-free restaurant on the corner 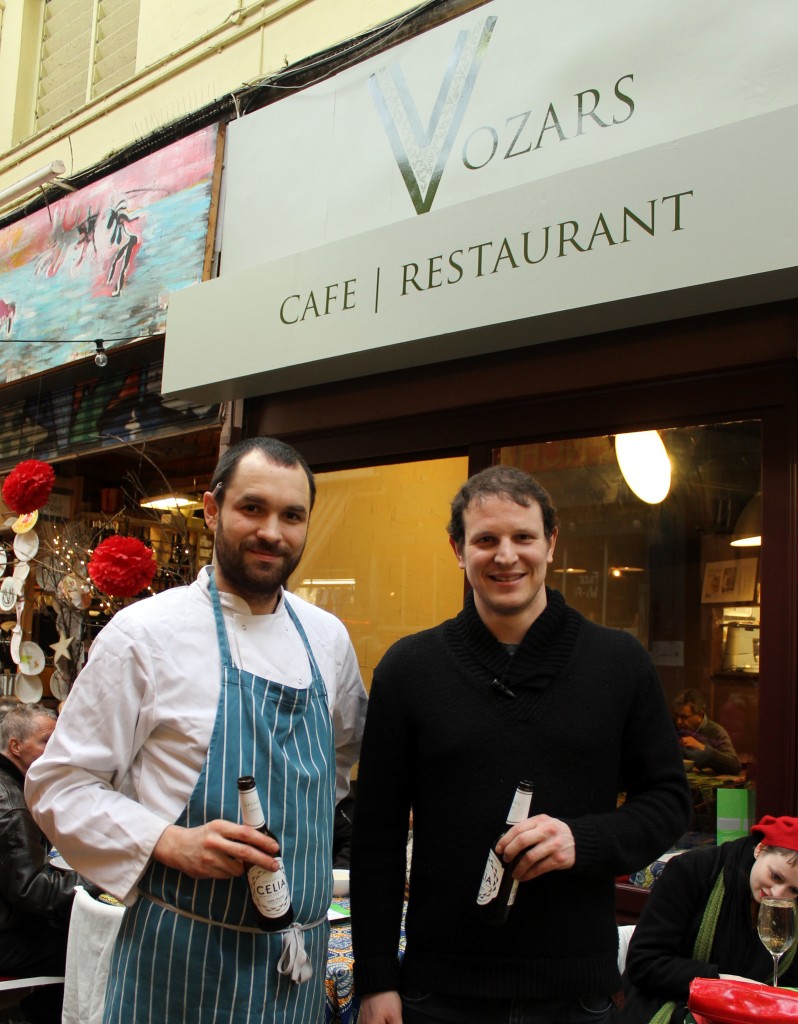 Martin and Nick in front of Vozar’s

When I arrived, Nick was on his way, and Martin was in the kitchen, so I was treated to a Celia and had a chance to contemplate the new gluten-free beer I was tasting. It was cold and crisp and a little spicy, with a more interesting flavour than some other gluten-free lagers. The labelling has undergone a rebrand, which I thought looked rather marvellous and really established itself as a certain type of beer. 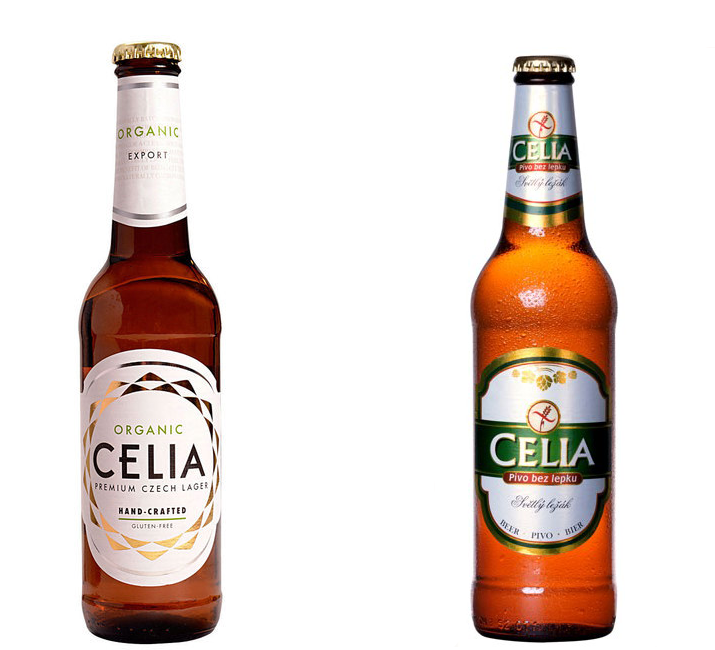 New Celia branding on the left, old on the right

You know, the kind of beer that wouldn’t look out of place on the shelves of say, Waitrose. A posh beer. The prominent crossed grain symbol on the front of the old label has been moved to the back of the new bottle, replaced by  a small “gluten-free” on the front. This is a pretty canny move by Celia – instead of marketing themselves as a niche product, to be consigned to the Free From aisles, they are marketing as an organic, hand-crafted, premium beer that happens to be gluten-free. The difference could result in a far wider distribution, which is a win for us coeliacs.

That’s the thing about coeliacs – we research brands and read labels like crazy. A small “gluten-free” on a label might look out of the way, but we’ll all see it. Brands don’t actually need to appeal to us as we simply don’t have the collective spending power for supermarkets to be interested. But if a brand that is gluten-free is appealing to everyone then that, to me, is ideal.

I don’t want to feel special and pandered to, I want gluten-free to be normalised.

By this point, Nick has arrived. I am gleefully offered another from a fridge which I now spot is practically overflowing with beer, and I am pleased when I hear the food will be ready soon. Martin serves us some soup: 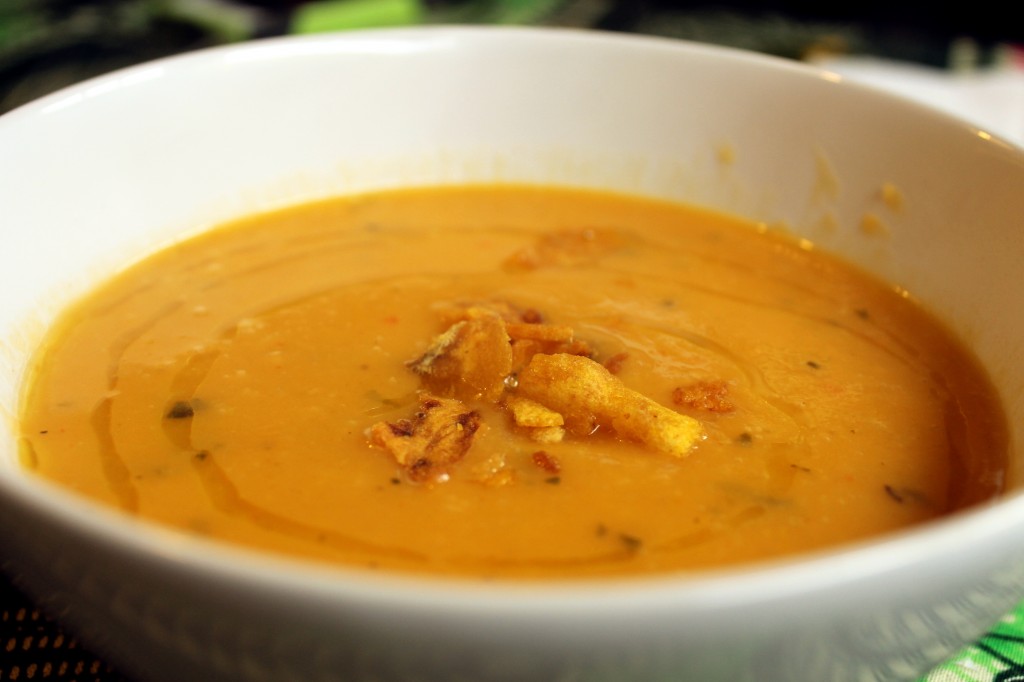 It was a sort of spicy thai butternut squash soup, and utterly delicious. For some reason, the gluten-free croutons delighted me – it’s been years since I have had a croutoned soup. It was a lovely little feeling of normalcy in my life.

Following the soup we shared 3 warm homemade quiches: beetroot & stilton, feta cheese & sundried tomato, and mushroom. They were all delicious (great job on the pastry!) but my favourite was the feta & sundried tomato. I do have a soft spot for feta though… 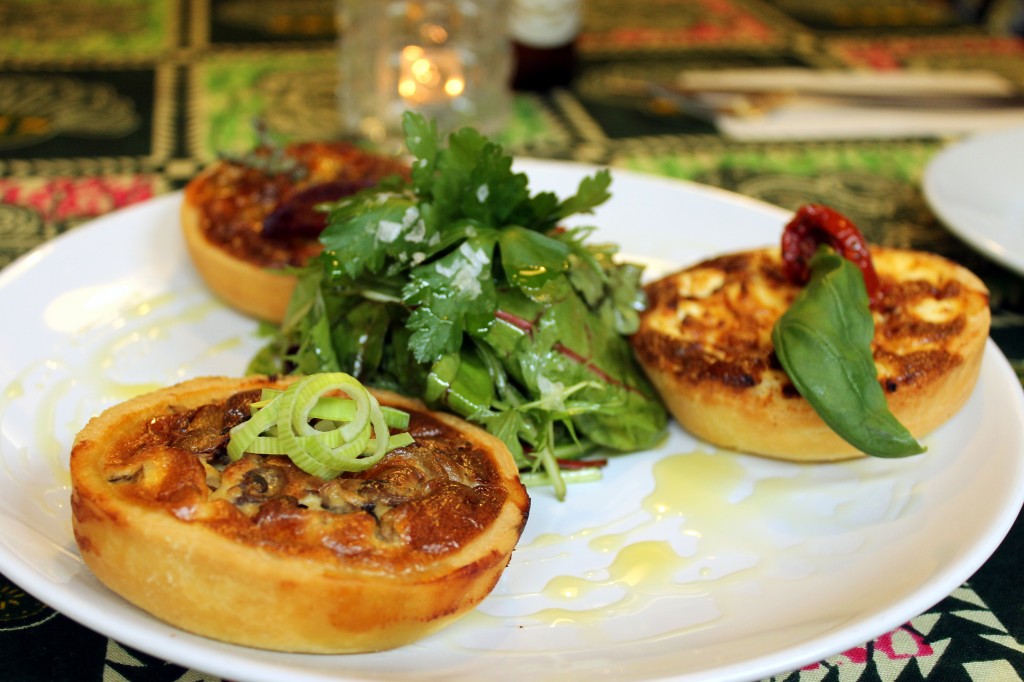 Martin clearly knows what he doing as a chef as every dish was impeccably presented.

I didn’t get a photo of the roasted pork belly we were then served, mostly because it would have shown me in a caveman state of delirium, guzzling down perfectly cooked pork belly. Honestly, I thought I didn’t even like pork belly before this. It was heavenly.

By this time the beer and conversation were flowing and I began to get the slightly unnerving feeling that I was on a weird sort of blogger date. Nick kept bringing me beer and Martin kept putting delicious food in front of me. It was about 2:30 in the afternoon, and I was a little bit drunk. I was asking “probing” (at least I thought they were) questions and writing them down in my serious reporters book, and I began to get a little carried away with the journalism fantasies: 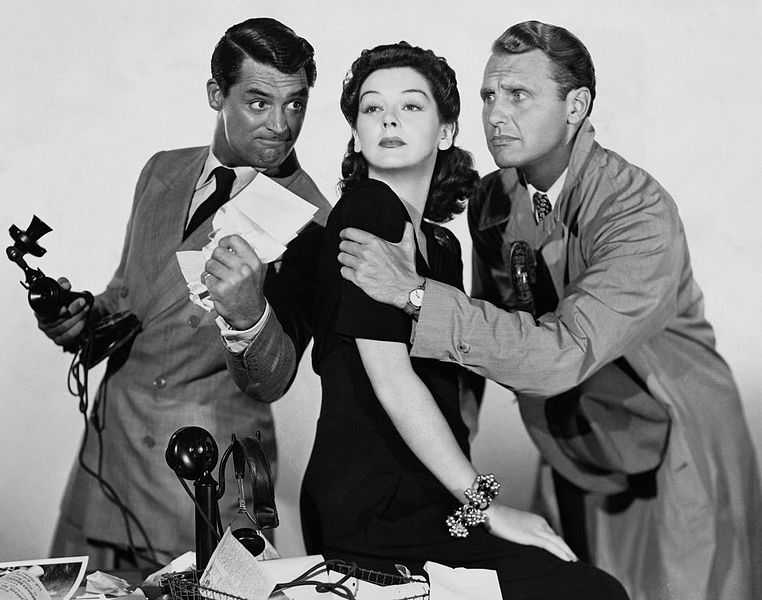 Or is that just me then? Surely some of you other bloggers must get these sometimes?

We talked a lot about food, and it was really nice to meet other like-minded people, who are clearly very driven and passionate about their products and restaurant.

They have an ever-changing menu at Vozar’s, but everything I tried was absolutely delicious, so I would imagine their other offerings are as well. I’ve heard they do gluten-free schnitzel, which I am DESPERATE to try! So I’ll have to come back…

I then had a coconut and white chocolate cake practically forced onto me: 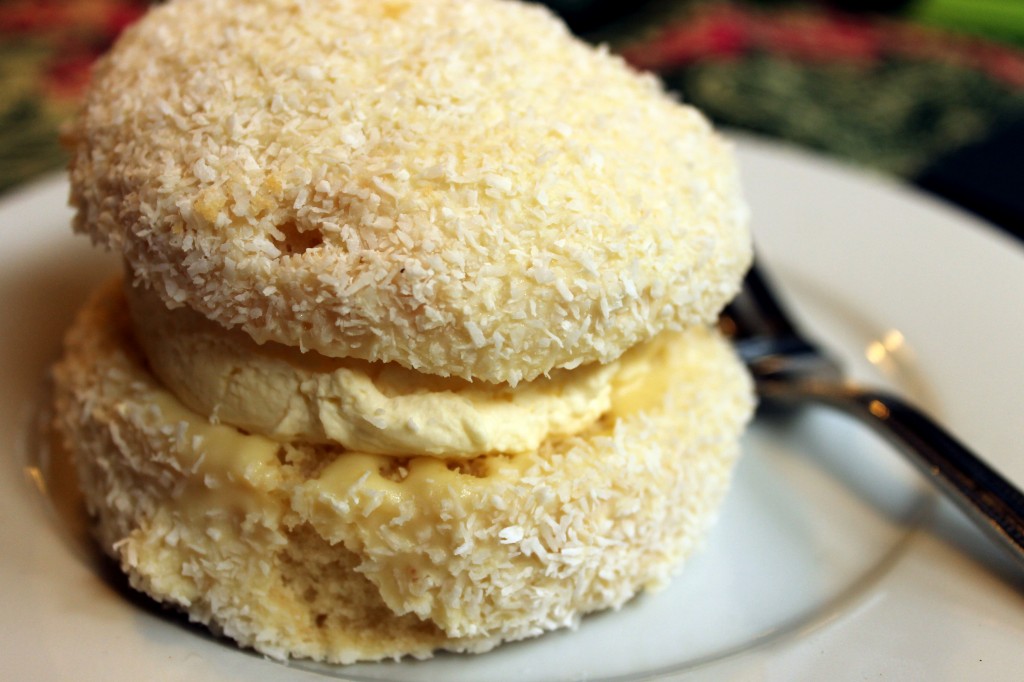 It was delicious, but I was so full by now, so I managed a few bites and got it back in a doggy bag, along with one of the WAGfree rolls, a rucksack full of beers, and Nick even gave me 20p for the toilet.

Overall, I had a really great experience at Vozar’s, with fantastic beer, food and company. The prices are reasonable (about £5-6 for a starter, £9-14 for a main) and well worth visiting if you are planning a trip to London.