When I went gluten-free in March 2011, I never in a million years thought I’d ever have a proper McDonald’s again. It just goes to show how far the gluten-free market is progressing that last Saturday I was able to stuff my face with a coeliac-safe gluten-free quarter pounder.

When I was a child, McDonald’s used to be super exciting, despite the fact that I only ever ate one thing on the menu – chicken nuggets and fries. Even in my teenage years, I don’t think my order ever changed. So actually thinking about it, I don’t think I had ever had a McDonald’s burger before last Saturday.

My tastes have changed drastically since I was younger, and I now like cheese and pickles and ketchup and all the wonderful things that go into a burger. But in the process of evolving tastebuds, I also evolved a deep aversion to the idea of McDonald’s. Call it food snobbery or watching Super Size Me a few too many times. And yet, I’d still sometimes pop in for a portion of fries just because I knew they were gluten-free.

So when I heard that select McDonalds in the Netherlands would be trialling gluten-free buns, I was excited, but I still couldn’t shake the kind of gross icky feeling I had about the thought of eating McDonald’s. I guess in my head, it has become the epitome of unhealthiness, despite the fact that I don’t object to the concept of burgers and chips in general.

Last Saturday, we took a trip to Zaanse Schans with some friends. Zaanse Schans is a cute little Dutch village that has clog making and cheesemaking and many, many windmills. It’s about 20 minutes by train from Amsterdam Centraal. 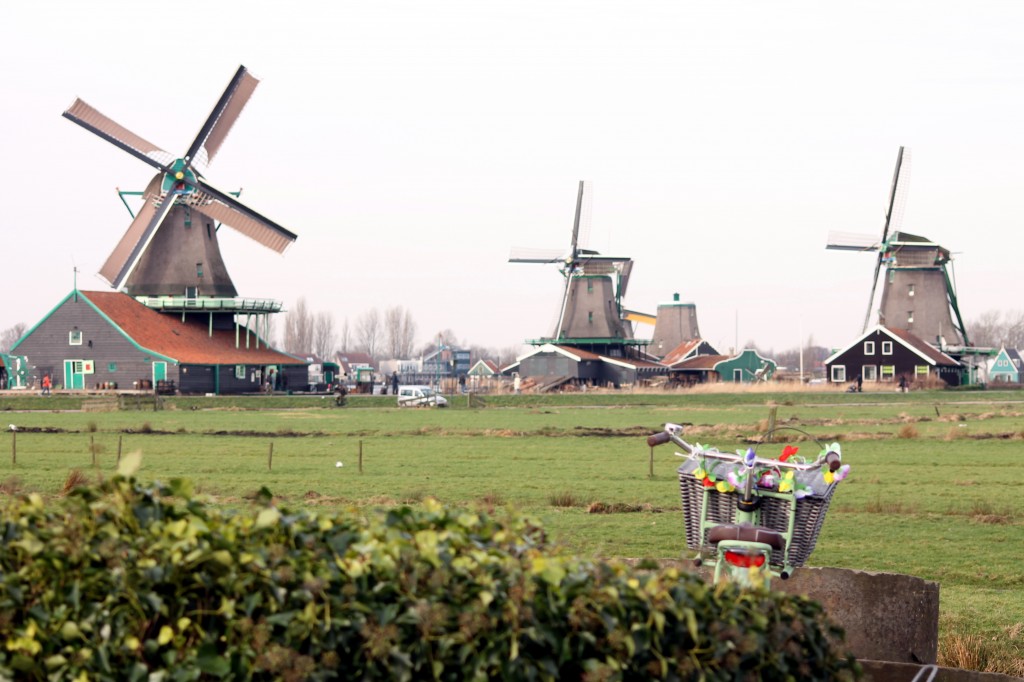 Just a small selection of the windmills

I’d researched places in the area to eat, and aside from a few fancy fine dining restaurants, there was nowhere that looked promising for a gluten-free lunch. So I looked into the McDonald’s in the area and with a stroke of luck the Zaandam (Koningin Julianaweg) branch is one of the four branches trialling the gluten-free buns, the other ones being Hoorn, Purmerend, and Rotterdam Zuidplein.

With a little embarrassment and a little shame, I asked our friends if we could go to McDonald’s so I could have me my gluten-free burger. To their credit they agreed, and off we trotted to the shiniest, newest Maccie D’s I’ve ever seen. It was all glass and steel.

This one had “EasyOrder” booths which meant far less stress for me. Making your selection digitally means that there is less chance of “gluten-free” being misunderstood, misheard or ignored. And you can set these machines to English as well! 😉 You make your selection and then press “customize”. This brings up a screen with lets you say “no pickle, no ketchup” – that sort of thing. Initially the gluten box is checked, and by pressing it you uncheck the box and your order comes with a gluten-free bun. This is confirmed on your receipt. Currently you can choose between a gluten-free hamburger, cheeseburger or quarter pounder. In for a penny in for a pound, I went for the quarter pounder 😉

I had half expected them to have to go down to the basement and dig out the dusty box of gluten-free buns. But my order came in next to no time, unlike my friend Nina’s chicken wrap, which took about 20 minutes to prepare.

For added reassurance, my box was marked with a special order sticker that indicated it was “zonder gluten” (without gluten). 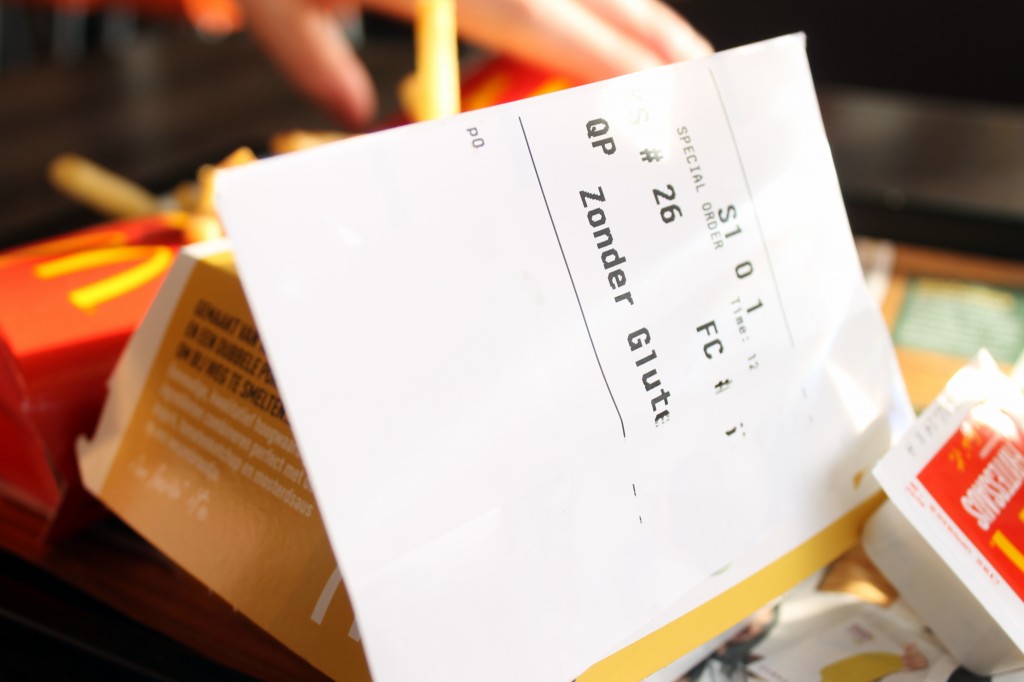 I opened it up in anticipation, and actually I did feel an unreasonable amount of excitement. I think this can be boiled down to 3 things:

2) I wasn’t charged more for the meal, nor was I treated like a freaky weirdo gluten-avoider 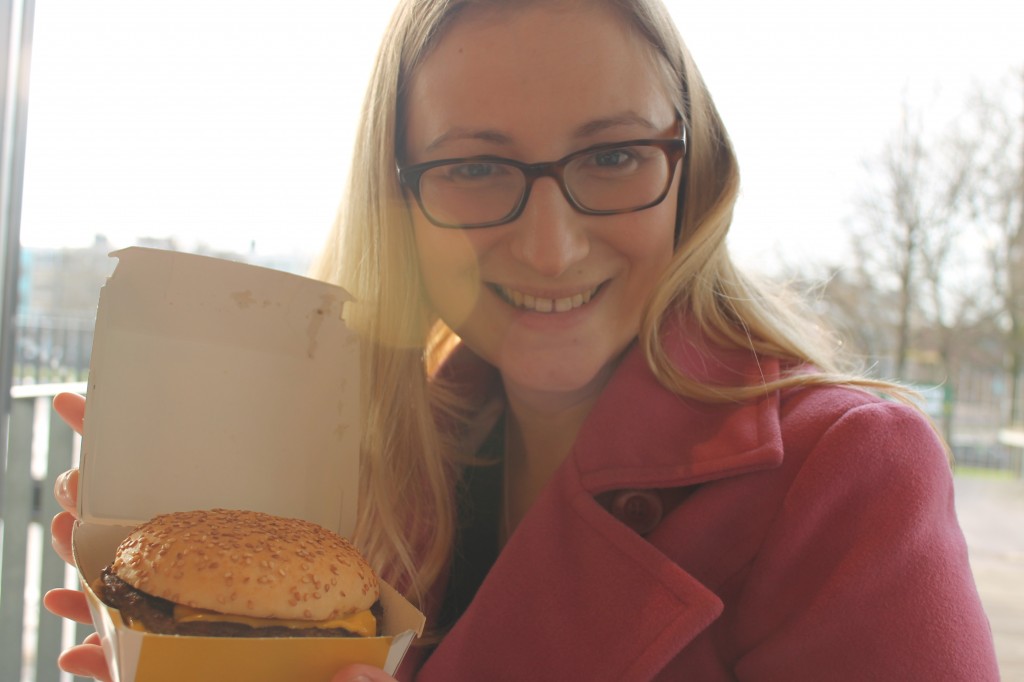 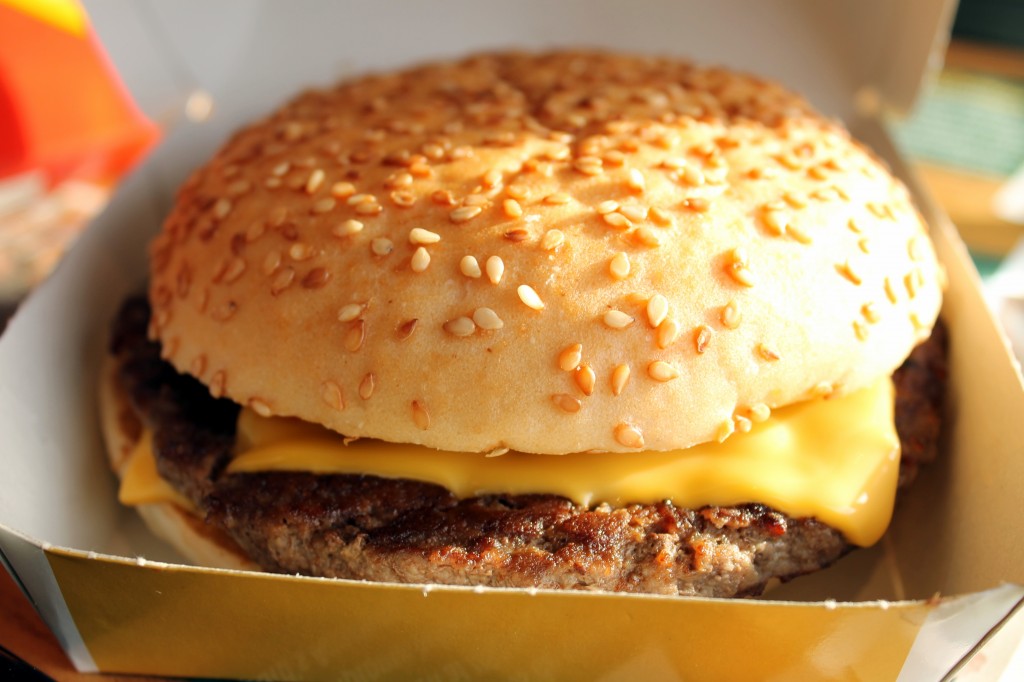 It looked different enough from the regular buns that I was satisfied it was definitely gluten-free. And as for the taste? 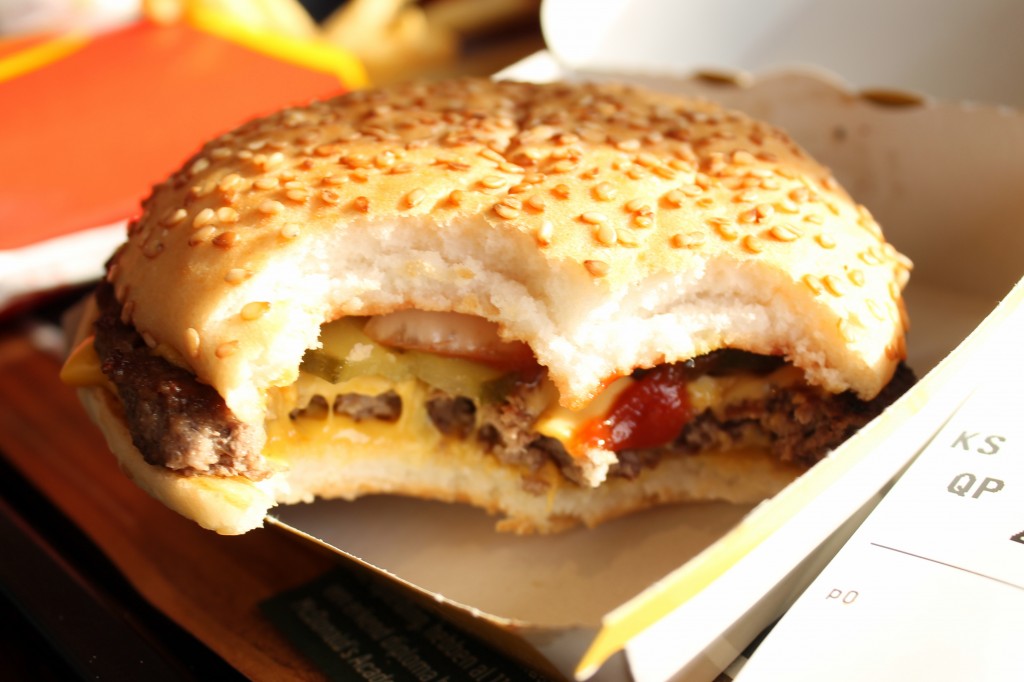 It was actually a lot nicer than I’d ever expected McDonald’s burgers to be. The meat, the cheese, the pickles, onion… there was enough going on in the burger that the bread merely complemented it all. I suspect the bread on its own wouldn’t have been great, but as a gluten-free burger bun it really works. 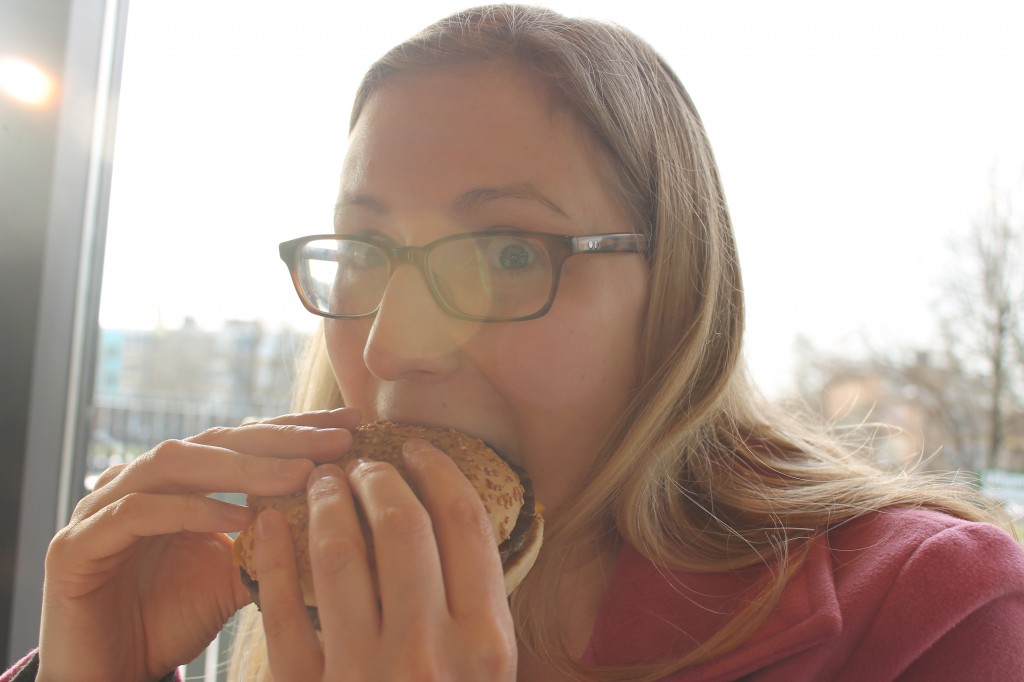 Seriously though, you don’t know quite how embarrassing it is to be sat in a McDonald’s taking photos of your food. I got some very strange looks.

Overall, as a gluten-free experience, it was stress-free, easy and delicious. You don’t come to McDonald’s expecting gourmet cuisine, but they have done a great job with the burger buns. The Dutch Coeliac Association played a huge part in making sure that they avoided the risk of cross contamination, and the buns are toasted in individual bags.

I see no reason why this couldn’t be done in the UK. If Pizza Express can go as far as to only use gluten-free flour for rolling in their restaurants, McDonald’s can offer gluten-free buns. There is clearly the demand, and they may find they even convert some insufferable food snobs like me to becoming quarter pounder lovers!