The Telegraph published an article today, titled The Great Gluten-free Scam, and the writer’s shock and confusion at the fact that:

in a corner of my local, shabby Tesco, whole new ranges of biscuits, breads, cereal bars and even fish fingers have suddenly arrived, all stocked under the label “gluten-free”

A sure sign of the apocalypse if ever I saw one. The article is tedious to read as it cycles through tired out cliches at breakneck speed:

a niche product for hippies and those with coeliac disease… socialite Nicole Richie… Gwyneth Paltrow’s kids… Novak Djokovic now has his dog following it… every week another friend (usually one who’s been vegan and who’s done every diet from Atkins to the 5:2) serves me quinoa or macaroons.

It’s pretty ghastly stuff, having dreary friends who serve you macaroons, see? Because they aren’t doing it for the right reasons. They are doing it because they are flaky people who like to flit from diet to diet without concern for their poor friends. How dare they try something new?!

Is nothing sacred any more?!

Er actually, I think you’ll find that Italy has increased awareness of coeliac disease, as children are routinely screened for the disease before they start school. Some of the better gluten-free brands in Europe are produced in Italy, thank you very much, and much of their traditional cooking is also gluten-free. There’s actually much more to Italian cuisine than wheat. Ever heard of risotto, polenta, or amaretti? Sorry if that makes me sound like a trendy hippy.

She circles around the point but never quite gets to it:

Her outrage seems to come from the fact that non-coeliacs are buying gluten-free food. Of COURSE coeliacs are exempt from her outrage, they have a REAL disease, not like these fakey fakers. 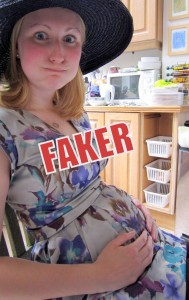 I guess without an official diagnosis, I’m just as bad as the fakers

As readers of my blog, you must have noticed how the gluten-free market has exploded in the last few years. And yes, more coeliacs are being diagnosed, but they still make up only about 5% of sales of gluten-free products. The reason us coeliacs have the choice we do is because of the gluten intolerant, and yes, the trendy dieters.

Let me put it another way, in Holland, no one has heard of going gluten-free unless they have coeliac disease. And the range of products reflects that – the only brands available in supermarkets here are Schär and a few Consenza products. Schär has some of the worst gluten-free bread I’ve ever tasted, but it keeps being stocked throughout Europe, as there is no other option for the consumer, and they have no choice but to buy it if they want basics such as bread.

The anti-gluten-free brigade really have it in for the gluten intolerant, largely because there’s no actual test for it, so it must be concluded that they are probably making up all their bloating, pain and discomfort. Attention seekers, amirite?

Nutritionist Ian Marber says: “We’re always looking for something to blame for everything that’s wrong in our lives and having a food intolerance is the holy grail. We can say: ‘It isn’t the fact that I lie flat on my back and eat cream cakes all day that made me fat, it’s the grilled aubergines I had for dinner last night. If I hadn’t eaten them I’d be size eight and 6ft 3in.’”

The only proper diagnosis for wheat intolerance is a test called a food challenge, carried out in a hospital.

I would be interested in hearing from ANYONE who, having had coeliac disease ruled out, was actually offered a food challenge like this:

The patient is blindfolded and tested for wheat under controlled conditions, then monitored over three days to see if they develop any symptoms. Depending on which foods they react to, a food elimination programme is carried out under strict supervision.

For the most part this is something you are left to do by yourself at home. In fact, I was told to do this before I was even tested for coeliac disease. I would drop dead with surprise if they’d told me to spend 3 days in hospital to test for wheat intolerance.

Even products like humus, which have never contained gluten, are now being labelled “gluten-free” by canny shopkeepers, to make them more attractive to the health conscious.

Maybe, just maybe, they are being asked “is this gluten-free?” so often that they thought they’d put it on the label? Or perhaps they are a responsible manufacturer with regards to clear allergen labelling? I am well aware hummus shouldn’t have gluten in it, but I can bet your ass there is hummus out there which does. What exactly is the harm in labelling your products clearly? How is it a massive scam?

Oh right, the cost of these gluten-free foods. The author on the one hand looks down on the gluten-intolerant and those choosing to go gluten-free for health reasons, but on the other hand is very concerned that they are being ripped off:

A gluten-free label equates to a large mark up (though manufacturers argue that this is a result of higher production costs).Gluten-free Genius bread costs £3 a loaf in Tesco, compared with £1 for an ordinary loaf. Tesco’s Free From fusilli is £1.40, while a normal pack costs 95p.

Yes, gluten-free food is expensive. There is a much smaller market for them so manufacturers don’t benefit from economies of scale like large-scale producers do. The cost of raw gluten-free ingredients such as maize or buckwheat is significantly higher than for wheat – likely also because there is less demand. As easy as it is to immediately assume that everyone is out to rip you off, there is enough competition within gluten-free brands in the UK to drive prices down (I believe Tesco Free From bread products are some of the cheapest? Correct me if I’m wrong). No one is going to go into business unless there is profit to be made. The pursuit of profit does not automatically equal being ripped off as a consumer.

The author also points to the “backlash” against gluten-free food in the US, mentioning the article “Coeliac: the Trendy Disease for Rich, White People”, which I am not going to link to, but I shall link to Gluten Dude’s excellent take down of it. Over in America, gluten-free has taken an absolute beating, especially with regards to the myth (and subsequent unfunny jokes in film and on TV) that it is only rich white people who have food allergies or intolerances.

Unfortunately, the gluten-free community has even less tolerance for jokes than for pasta.

See what she did there? Only these no-sense-of-humour gluten-freers could fail to find that one funny.

The bottom line is, if Gwyneth Paltrow wannabes with plenty of cash want to spend their money on gluten-free products when they don’t need to, that’s fine by me. They are helping the economy, supporting small producers and hurting no one. We have to stop attacking people for their dietary needs, habits or preferences.

But if those with gluten-intolerance, self-diagnosed or not, are struggling to buy food for their family we should be supporting them, not criticising them for responding to their bodies by insinuating they are jumping on a bandwagon. Categorically stating that gluten-free food must be a scam because some rich and trendy people buy it certainly isn’t helping anyone.