Regular readers will notice that over the last couple of months I haven’t been updating as often as I used to. I hope to assure you that this is a temporary glitch, a side effect of a lot of changes in my life catching up with me. I’m pretty good at travelling, and I’m settling in beautifully here in Haarlem, so I’ve been, as usual, blaming myself for failing to reach goals I set for myself without considering that moving countries is actually quite a big change, and I can’t expect myself just to magically keep going. Something’s gotta give.

It’s been a beautiful September here, and although it’s turning colder now, the weather is still gorgeous: 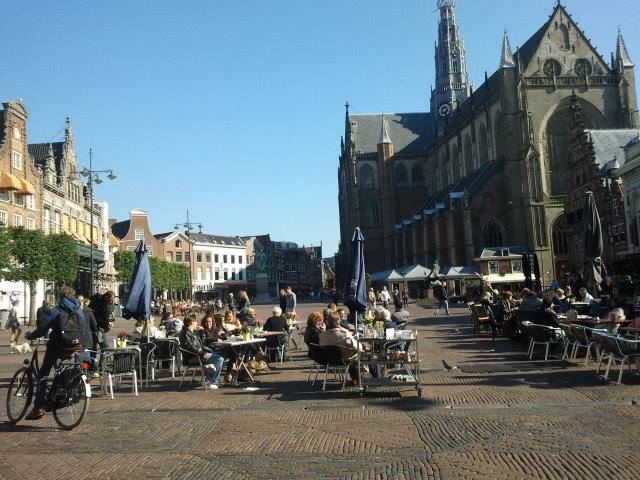 I was sent a huge box of Glebe Farm mixes to review way back in June/July. Remember those three weeks of hot, hot weather? Yeah, I was baking. And baking. Eventually the heat in my kitchen resembled the heat in my oven and I couldn’t bear the thought of baking any more. So this is why it’s now October (when did that happen?!) and I am only now reviewing the bread and scone mixes that I was sent.

I didn’t have appropriate cutters so I made slightly more than 6 scones (but they were a little diddy!). I feel a bit silly that I still don’t have basic round cookie cutters, and yet I have dinosaur and Christmas ones.

The dough made up well and was pretty easy to roll and cut out. The ingredients: (in no particular order): sultanas, buckwheat (sarrasin) flour, xylitol (a natural sugar substitute), gluten free baking powder, xanthan gum, potato starch, pectin. 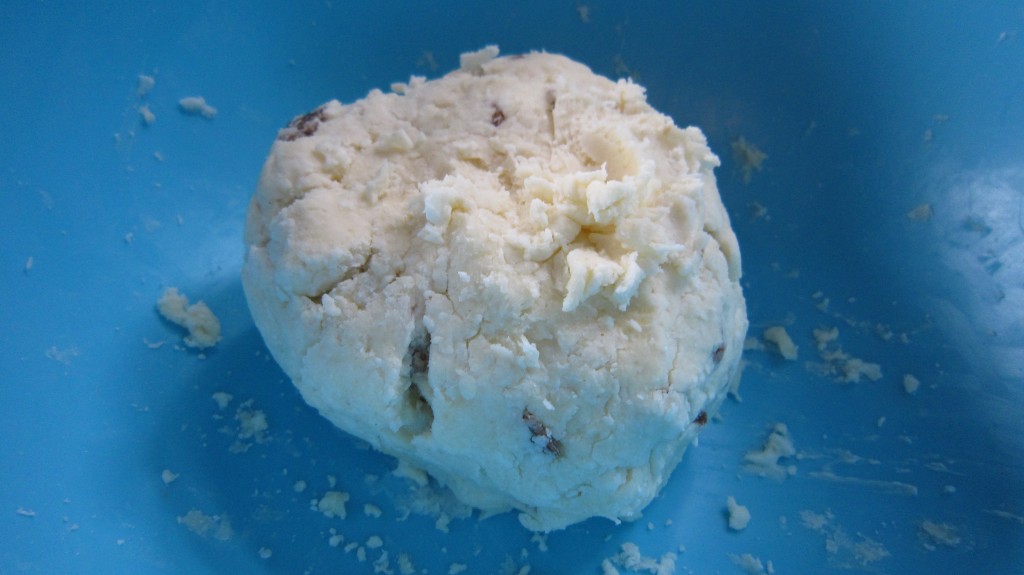 So  it’s pretty much what you would expect from a gluten-free mix, ingredients wise.

The addition of the butter and yoghurt really makes this mix, as the smell when they were baking was divine! I think sometimes the recipe they put on the back of the packet is just as important as the dry ingredients. I mean, you can’t actually go wrong with butter and yoghurt (they do have dairy-free alternatives though! Dairy-free spread + mashed bananas) 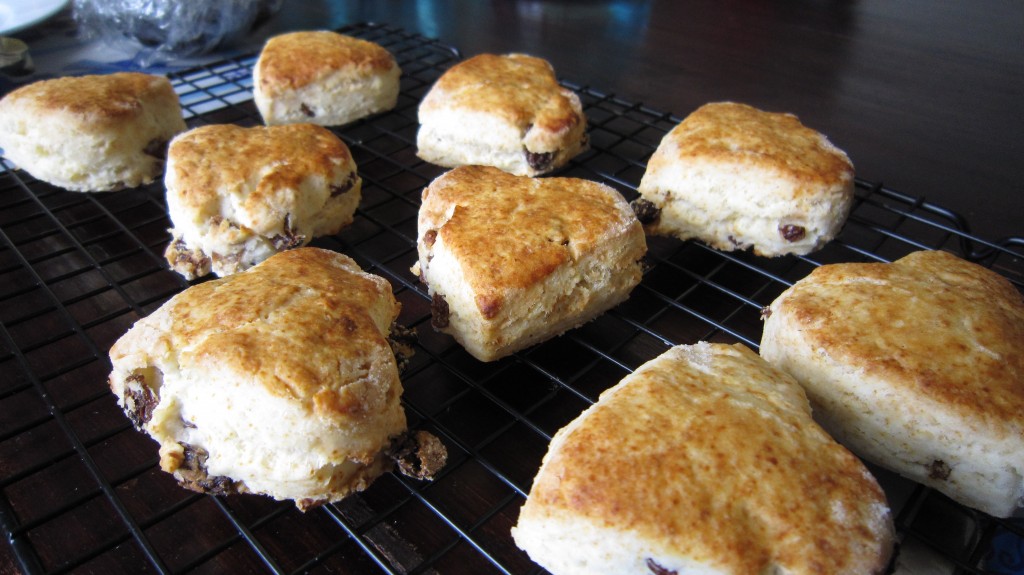 As you can see, these little babies turned out great. I made quite a few smaller heart shaped ones (the only sensible cutter shape I have!) and then I thought I would make some larger ones just by cutting with a knife. 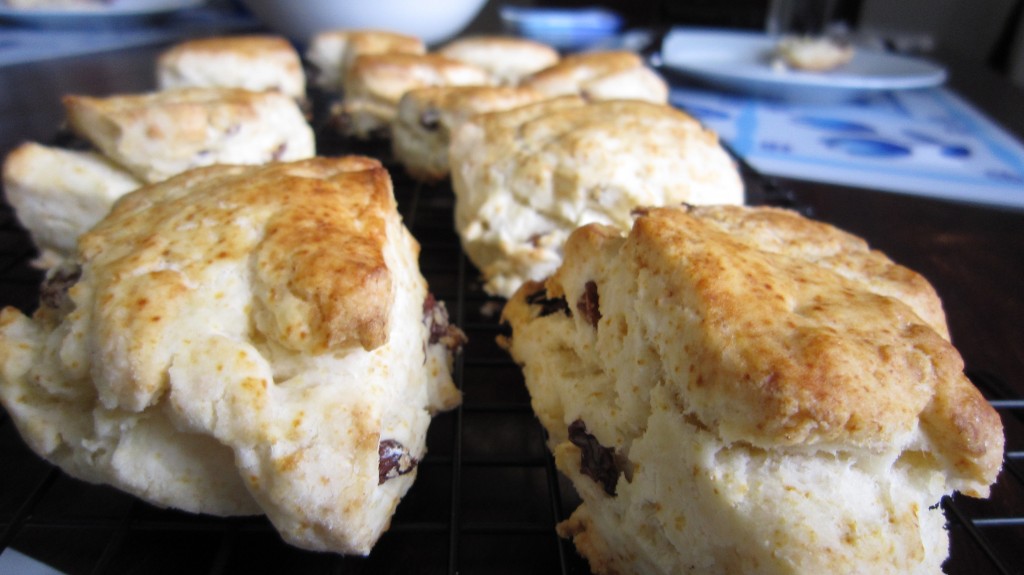 They were really wonderful fresh out of the oven, but didn’t hold up so well the next day so I would recommend freezing them and then reheating them in the oven when you want the rest! My gluten-eater boyfriend declared they were “nice, but not real scones”, and I declared him to be a party pooper.

Next up, the bread mixes! Glebe Farm do a Gluten-Free White Bread and Pizza mix, as well as a Gluten-free Seeded Brown Bread Mix, each £1.99. Checking the back of the pack, there were various ways to make them both up – with or without yeast. I made up the white mix as “soda bread” (using bicarbonate of soda instead of yeast) and I made up the seeded brown mix as normal, with the yeast sachet. You can do both in a breadmaker (which I don’t have! Wah)

Like most gluten-free bread mixes, this formed more of a batter than a dough, and had to be spooned into the loaf tin. 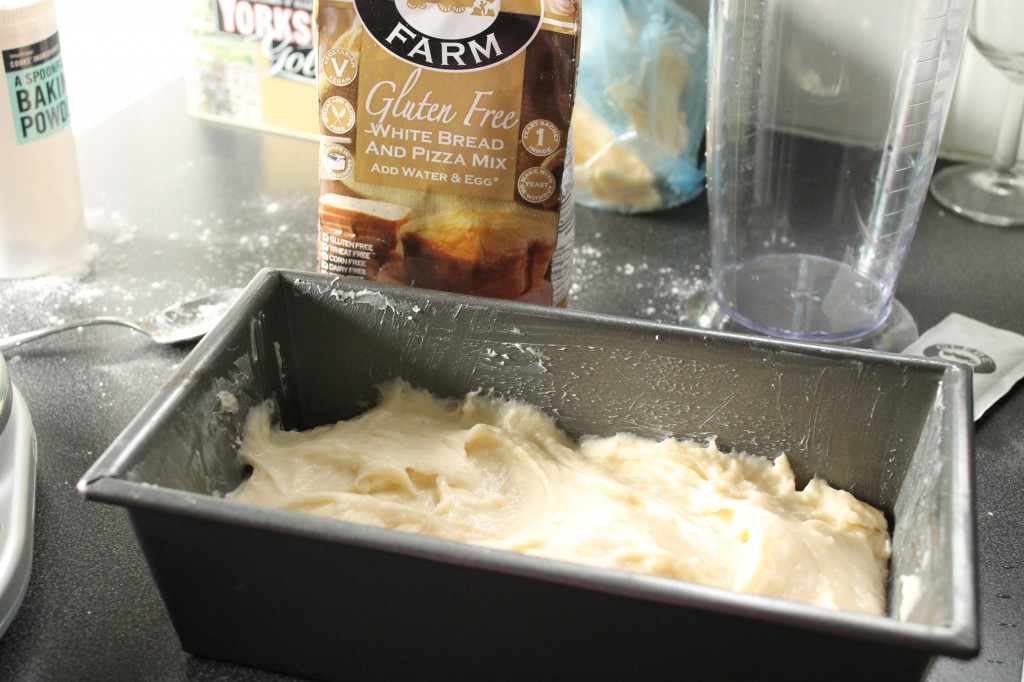 It didn’t seem to rise a huge amount in the oven – I’m not convinced I would make it again with bicarbonate of soda unless I was baking for someone with a yeast allergy. 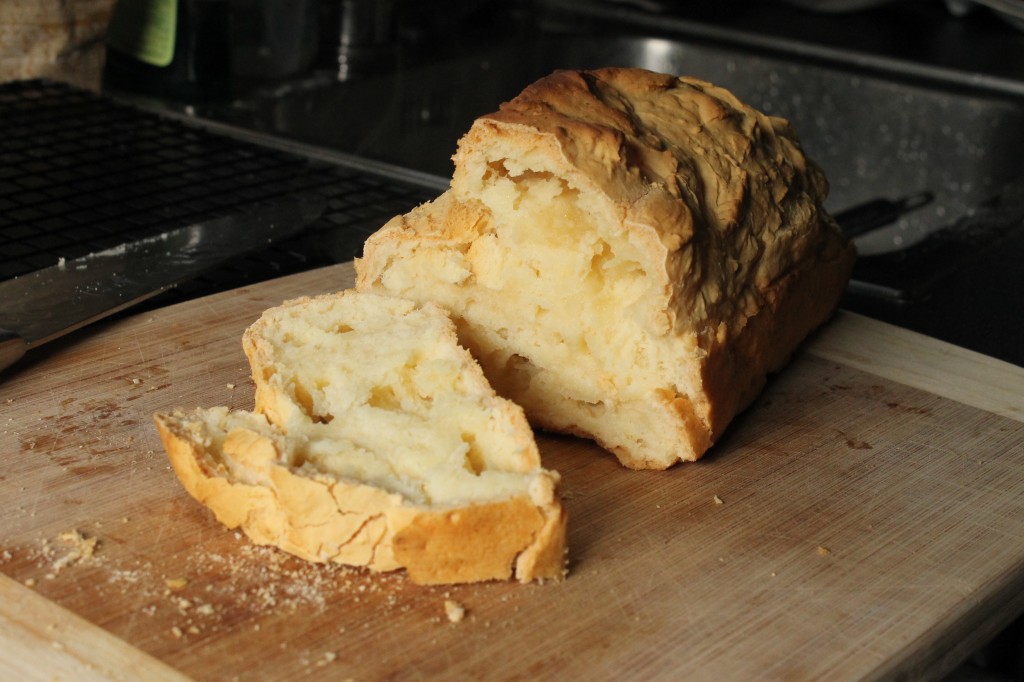 But the bread itself was very good! The reason I don’t bake a lot of bread at home is that I always decide it would be nice to have fresh out of the oven with some butter and suddenly the entire loaf is gone! Oops! 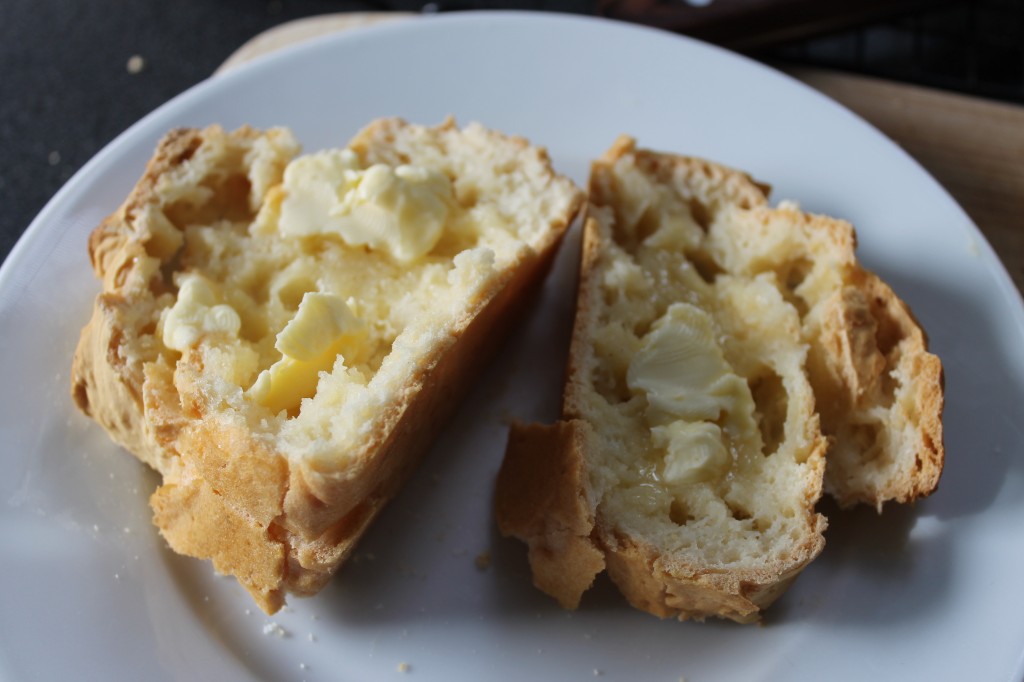 Finally, the Seeded Brown Bread mix. I will say this, I don’t know quite how they get away with calling it a brown bread. The ingredients: (in no particular order) rice flour, sarrasin flour, linseed, sunflower seeds, xanthan gum, xylitol (a natural sugar alternative made from Birch tree syrup), potato starch, salt, pectin, yeast sachet. Yup, nothing “brown” in there. But that’s just my pedantry talking. 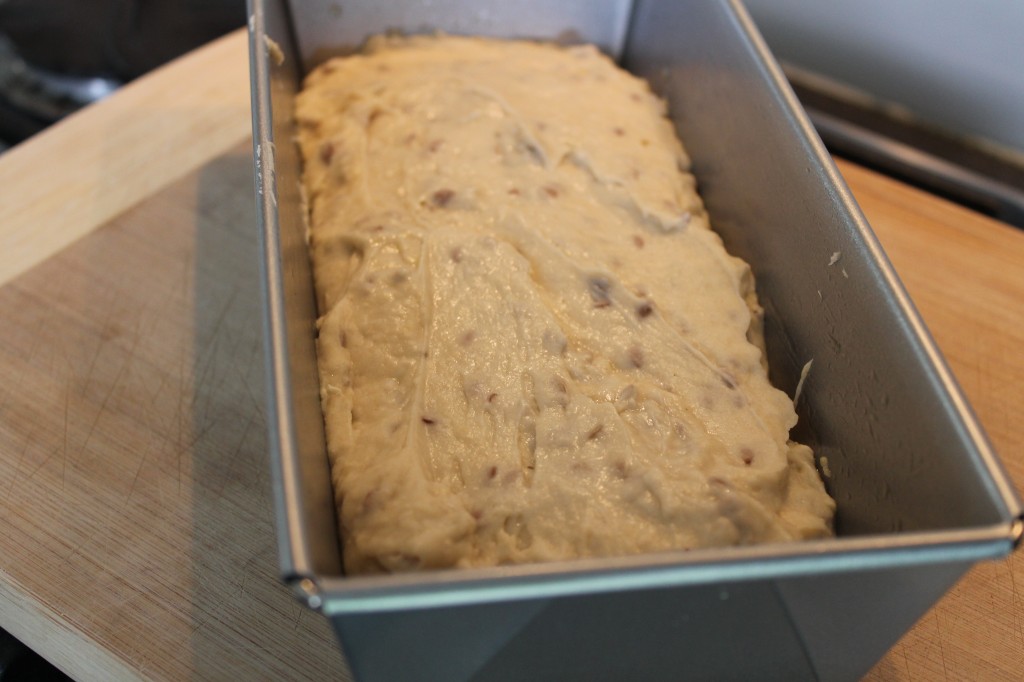 It formed a similar batter but it seemed to be a bit tidier than the white mix. I wonder whether it was the ingredients or the fact that I used yeast. Still, it rose quite well and baked up very nicely. 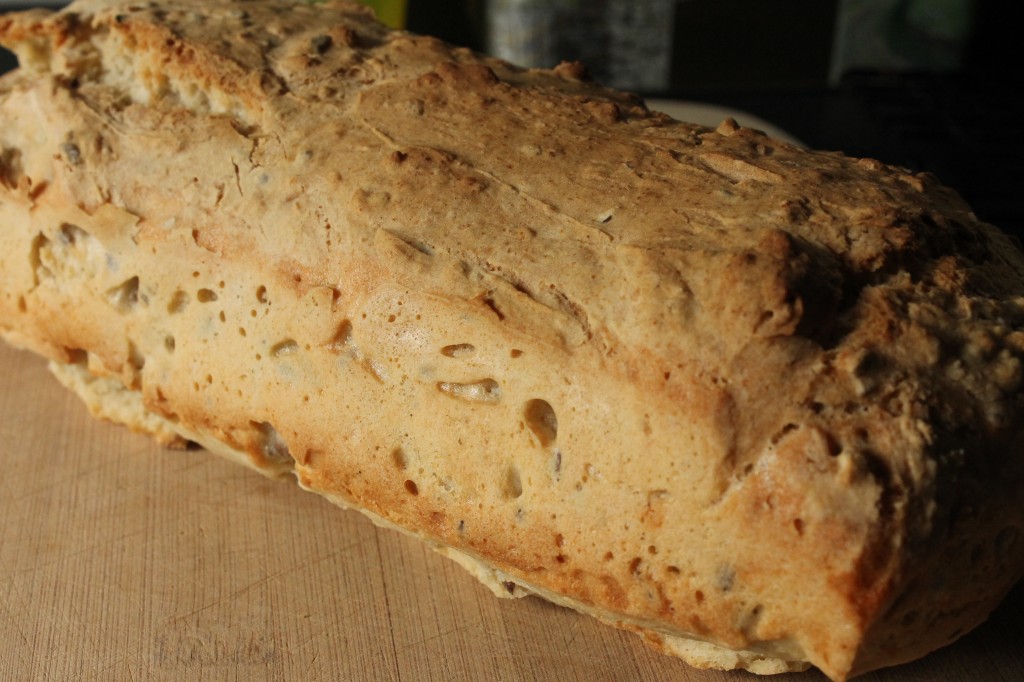 No, it’s really not a “brown” bread but I loved it. This was by far my favourite of the three mixes. 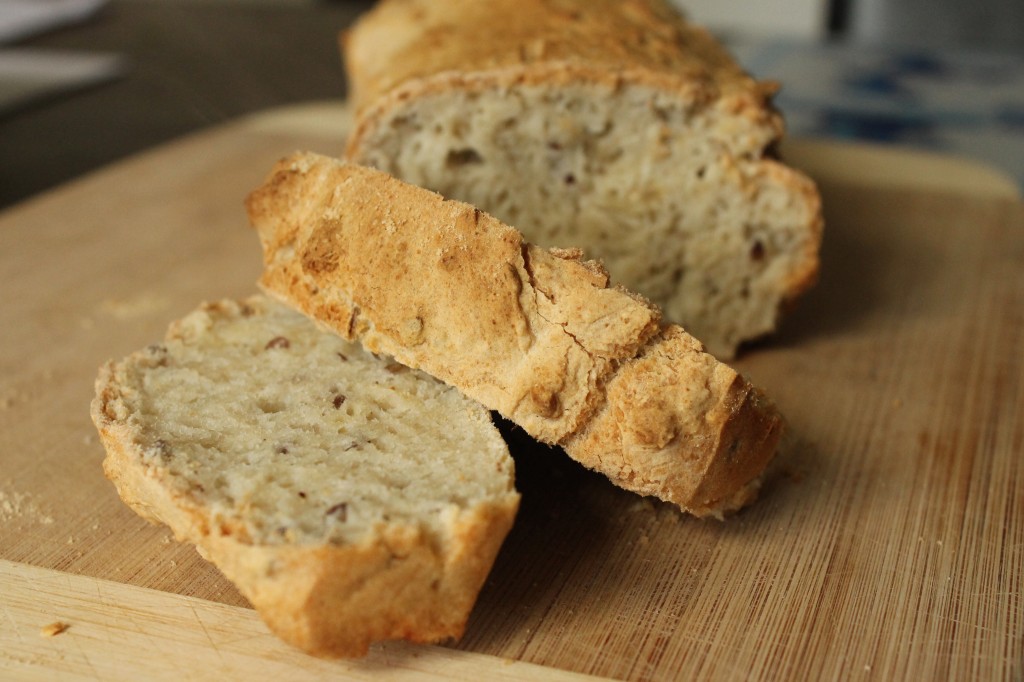 It had a lot more texture and flavour than the white bread and seemed to bake more evenly. I ate it “Dutch style” with ham, gouda and mustard sauce! 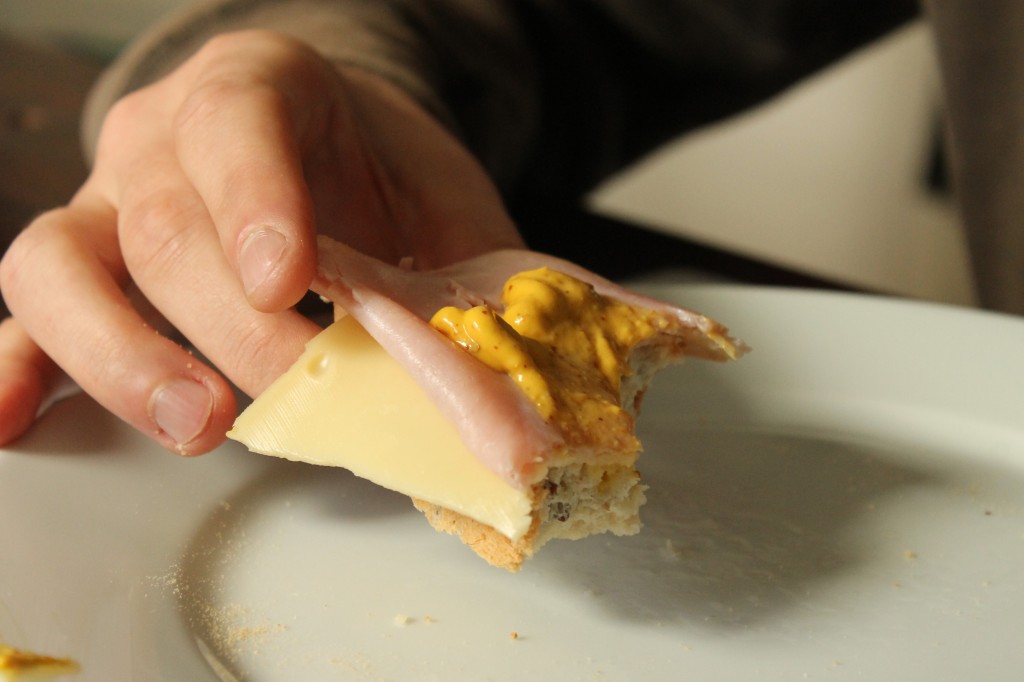 Overall, I was impressed with the mixes. They seem to be good value for money, and more suitable for everyday use. I don’t eat a lot of gluten-free bread, but if I did, I could see myself getting a bread machine and using the seeded mix quite a lot. I’d rather spend £1.99 on a mix than a hit-or-miss gluten-free loaf that may or may not fall apart in the bag.

If you want to try the Glebe Farm products, you can buy them online here.