Us coeliacs are a strange bunch. Or perhaps it’s just me. I don’t know about you but I can at this very moment recall all the doughnuts I’ve had in the last two and a half years. The same goes for any product that is hard to find in gluten-free form.

I know for example, that I haven’t eaten the following things since diagnosis (i.e. in 2 1/2 years):

And I have some things that are so hard to find that I can recall each time I’ve had one:

It’s really a good thing that these lists are so short. At diagnosis my “list of things I can’t have” seemed to be huge and neverending, but as I discover more and more gluten-free products and recipes, the gap is closing.

I got pretty excited when I was asked to review the Foodamentalists new gluten-free doughnut mix. My only one since diagnosis was bought at Tu-Lu’s Gluten-Free Bakery in New York, which is a bit far to get my doughnut fix.

For some reason I always thought they were difficult to make, but I was pleasantly surprised at how easy they were, even thought I have a weird fear of deep frying. You could probably bake them instead, but the timing would depend on how big you make them.

The instructions called for 100g yoghurt, 2 tbsp beaten egg and 12g oil to be added to the dry mix, which was harder than you’d think you measure out. Since most of my kitchen stuff is now in Holland, all I have is an analogue scale. So I sort of “guessed” that 12g of oil is probably about a tablespoon or so. I don’t know if you’ve ever tried to measure a tablespoon of egg, but it’s incredibly difficult as the egg keeps slipping off the spoon. I figured a small amount of egg either way wouldn’t make a huge difference, so I think I ended up putting about half an egg in. 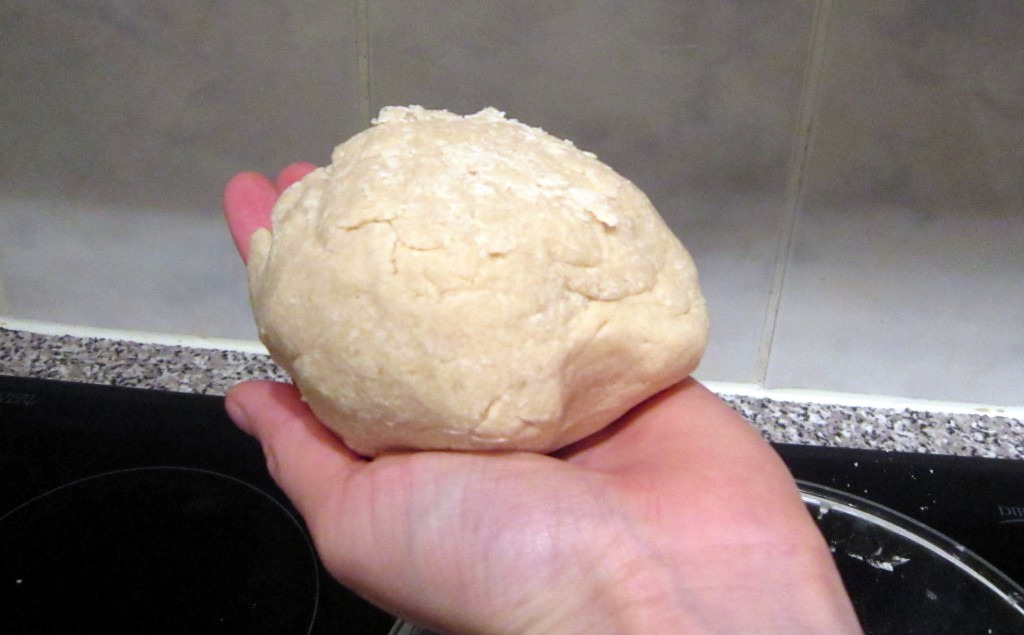 Since I didn’t have any flour to roll the dough out in, I reserved a little from the pack, but in the end it didn’t really need rolling out. I added the mix until it formed a dough that I could knead a little and then rolled sausages with my hands and joined them into little mini doughnuts. The instructions said to cut them out with cutters, but guess what, I didn’t have any in my somewhat empty kitchen, so I had to make do. It was pretty easy to make the rings. 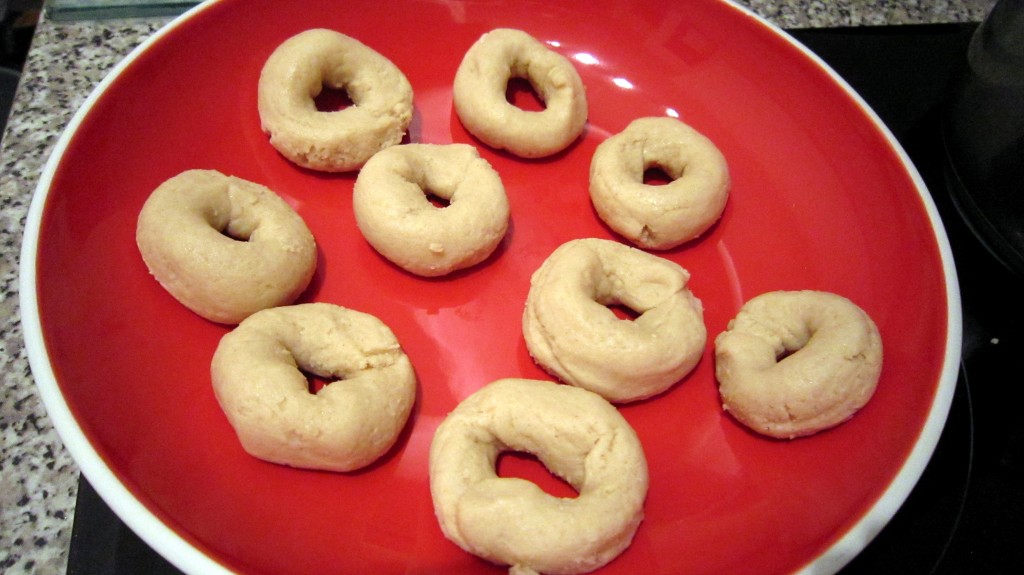 It’s a versatile mix, so you really don’t need to worry about being exact. The goal is to make a dough that you can mould into shapes, be they rings, balls or fancy cookie cutter shapes. Once you have that consistency, you’re set.

I mentioned before that I’m scared of deep frying, and I think it’s because of the hot oil. They asked for 2-3 inches in a pan, but I think I put about an inch and it was fine. They took no time at all to brown. In fact they cooked so fast I think I may have overdone them a bit. 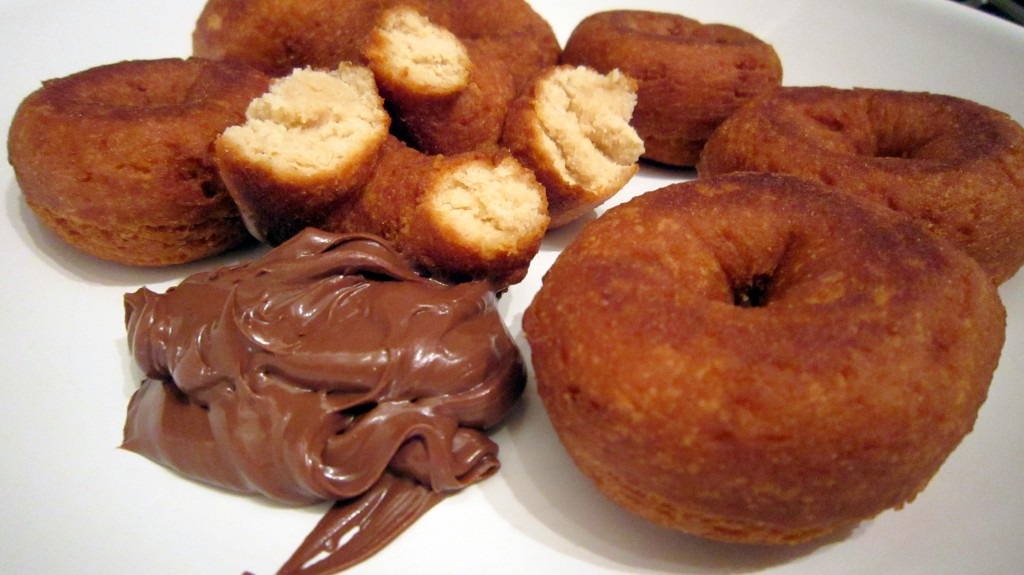 This is the result of less than a minute of frying. The pack suggests to toss them in sugar and cinnamon when they are warm, but my sugar and my cinnamon are in Holland so I improvised with some Nutella. 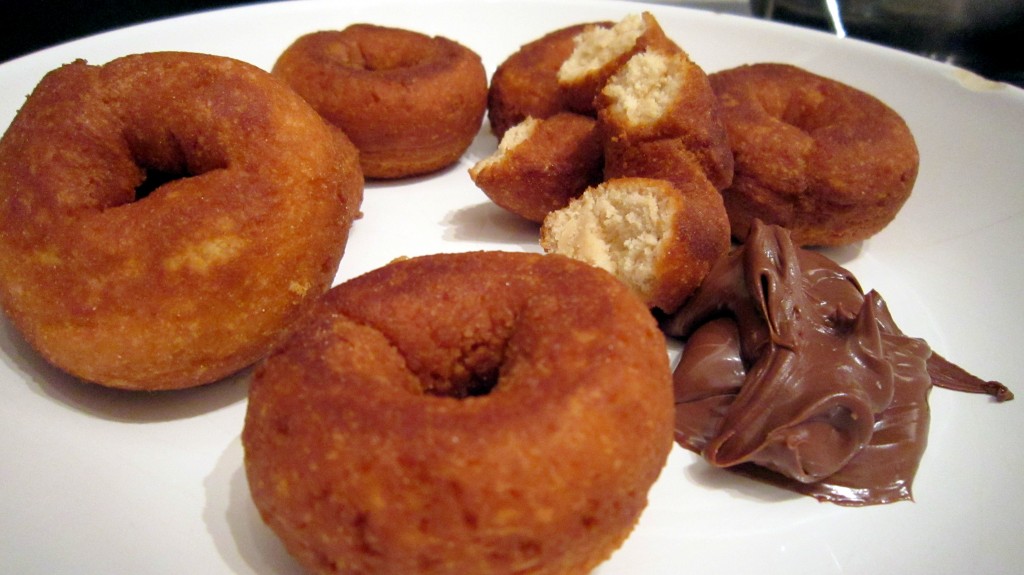 They were very yummy whilst warm. Not quite as chewy as I remember doughnuts being, but certainly a great substitute. They didn’t keep well overnight though, by the time it got to morning (and I wanted some breakfast doughnuts) they had gone a little stale. I imagine they could be stuck in the microwave for a bit to improve them.

However, the only reason they even lasted until morning was because I was the only one in the house. Even with my tendancy to eat like I’m not absorbing, I still couldn’t manage the whole batch. Not for lack of trying. 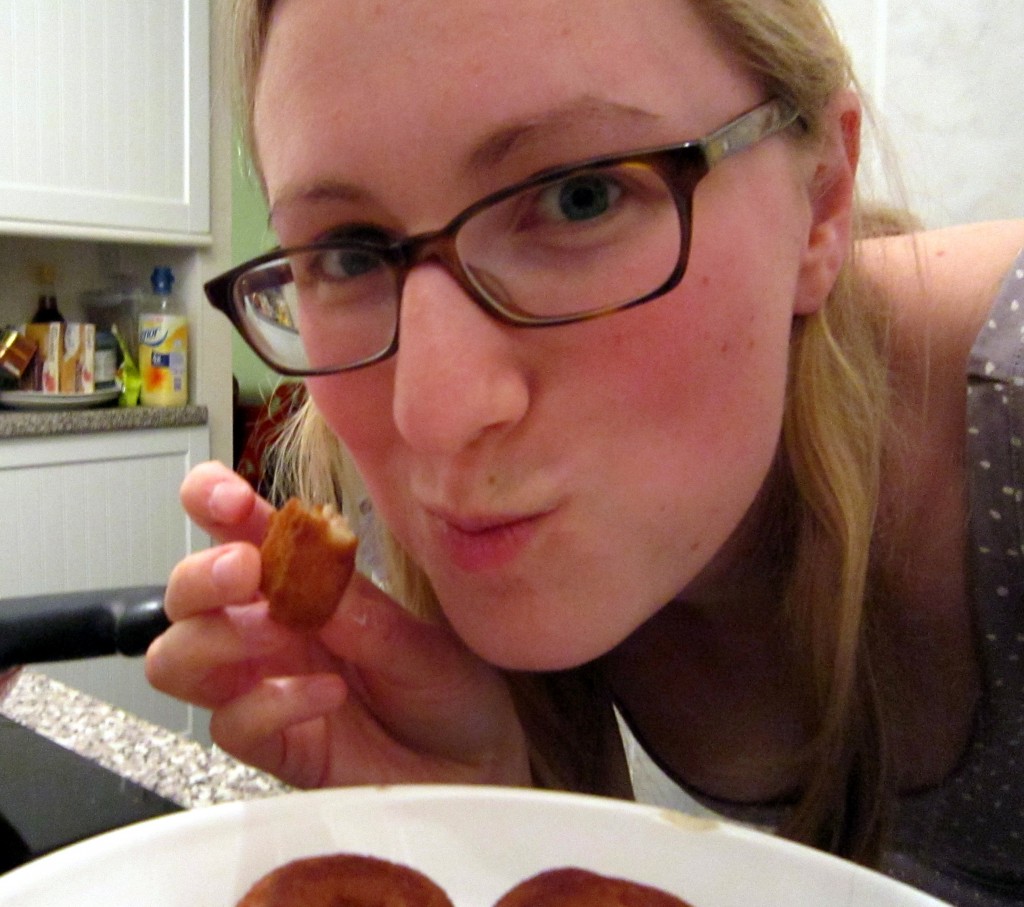 You can buy the Foodamentalists’ gluten-free doughnut mix online for £2.99, which seems like a good deal when you consider you can pay the same for a single cupcake in some places. The mix made about 10 small doughnuts.