Last week I was fortunate to be invited to the launch of a new brand, ilumi, and try some of their meals. Hosted at La Cucina Caldesi, an Italian cookery school that incidentally also does a gluten-free course, a group of us lowly bloggers were welcomed with open arms into a beautifully decorated room with kitchen demonstration section. We were definitely there to be schmoozed. 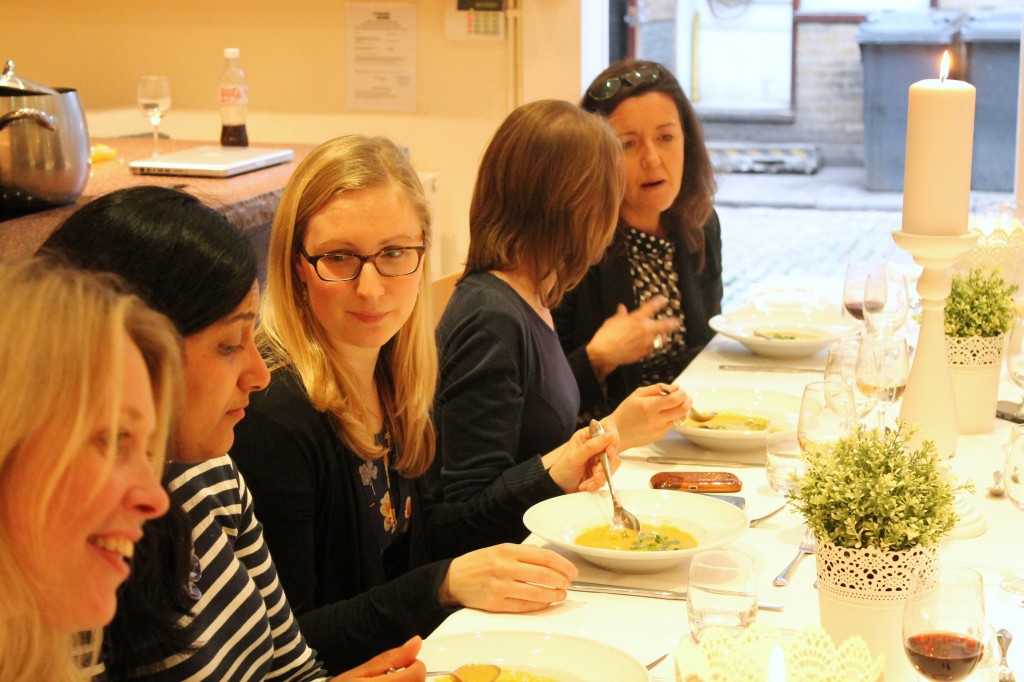 That’s me, schmoozing back.

As producers of meals-in-bags, aka ready meals, they needed to put in a lot of effort to convince me. At home, I cook almost everything from scratch and I’m used to knowing exactly what goes into my food. But I appreciate that not everyone enjoys cooking like I do, some people are short on time, and some people just don’t have a problem with ready meals. After sampling one of Sainsbury’s FreeFrom ready meals and thinking that I would rather live on air and sunshine than have to eat another one of those, this coeliac was firmly in the “sceptical” camp.

I should at this point mention palate. Your palate is your sense of taste and how you perceive food. This is not hard-wired into us, it changes according to the food we eat. If you cut out sugar for a month, you suddenly notice how much sweeter sugary foods become. That’s your palate changing. If someone used to eating loads of freshly prepared and healthy food eats a ready meal, it won’t taste the same to them as someone who eats them every day because they aren’t used to the salt and sugar content (it’s usually salt and sugar that jumps out at me from ready meals). So bear that in mind as I wanted this to be my honest assessment of the products.

It was encouraging that when they developed the products, they started from a place of “we want to make great-tasting food that happens to be gluten, dairy & nut-free” rather than “let’s give our FreeFrom customers some ready meals to stop them moaning”. They all seemed really passionate about the food and I think that is rather telling – when your job is to believe in a product, it’s a lot easier (and more convincing) when the product is actually good.

This mindset of “naturally gluten-free” led to them exploring world cuisines that wouldn’t normally contain gluten. So their range includes Thai, Mediterreanean, Indian and Moroccan dishes. I tasted two of them, and saw a third being cooked from scratch.

To start with, we were served the Tom Kha Gai soup. This is priced at £1.75 for a 250g pouch with 353 calories and 0.75g salt. The nutritional info looks pretty solid until you get to saturated fat (24g per pouch – recommend daily intake is 20g for women and 30g for men). However, the ingredients list looks reassuringly like something I would make myself:

As you can see, they have put all soy products in bold as a way of making allergen information clearer to consumers.

So how did it taste? 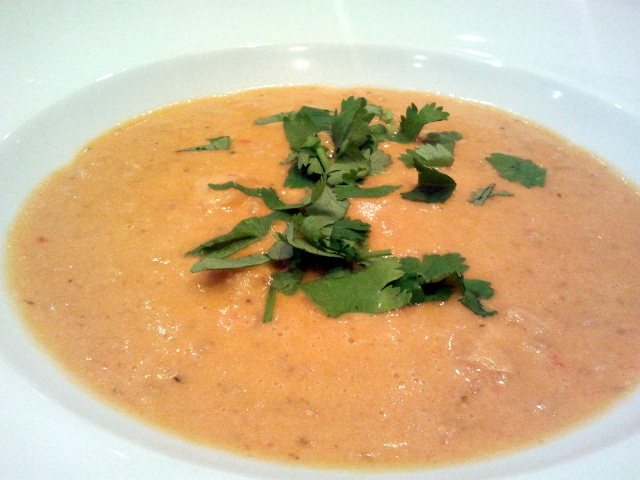 Actually, pretty damn good! It wasn’t overly sweet or salty, and the creaminess of the coconut was divine. I do love a good coconut based soup though… 😛 There was enough chicken and rice to be satisfying, but not too much that it didn’t still feel like a soup.

After the starter, we were given a demonstration showing how they make the Sweet Soy and Ginger stir fry sauce. They told us that the exact same process is done in the factories except on a larger level. They preserve the food by sealing it and slowly heating it, so there is no need for loads of salt or preservatives in the actual food. 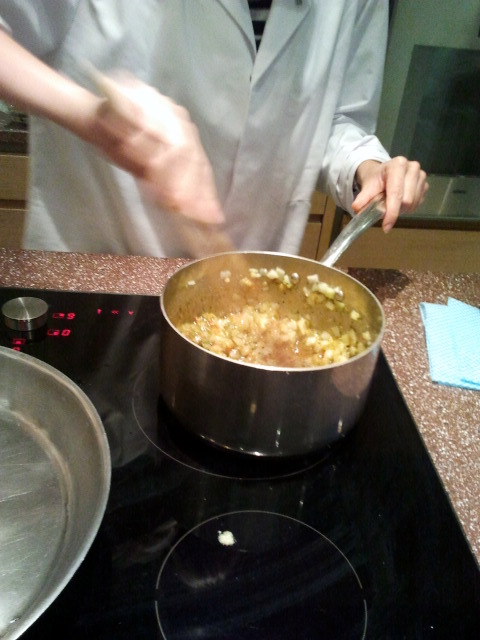 Making up the stir-fry sauce

It all looked fine until they threw in what seemed to me a HUGE amount of brown sugar. At this time I didn’t realise that this was called “SWEET soy and ginger stir-fry sauce”, but as someone who feels naughty if I add a more than a tablespoon of brown sugar to a spaghetti bolognaise it certain made my eyes bulge. But, I suppose, if you want a sweet stir fry sauce, you need to add sugar!

I couldn’t find the exact sauce on their website, but their Sweet Chilli Stir Fry sauce looks quite similar, costing £1.50 for a 200g pouch, with 24g sugar and 1.96g salt, and I imagine the nutritional composition is somewhere in that region.

For the main course we were given the choice of a veggie stir fry made with the aforementioned stir-fry sauce or the Beef Meatballs in Tomato Sauce. I went for the meatballs, on gluten-free spaghetti. 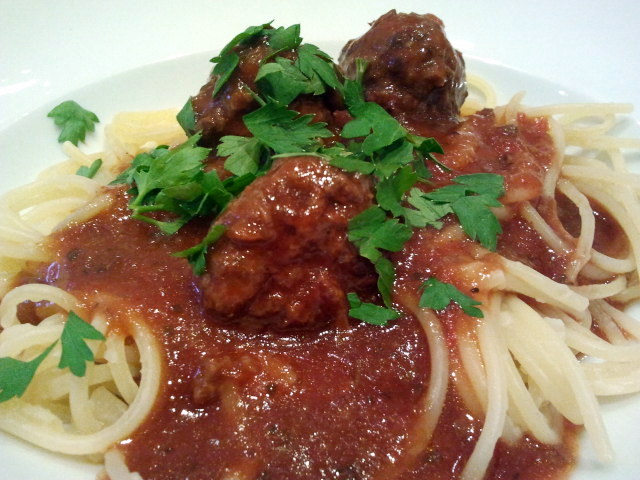 Here I think is where palate comes into play. I wasn’t a huge fan of this dish although it was satisfying enough – I’m not convinced beef holds up as well as chicken does in ready meals. I started getting diner’s remorse – wishing I had ordered the veggie stir fry! The other people I spoke to seemed to be in agreement that the stir fry was better than the meatballs.

This meal costs £2.25 for a 275g pouch that contains 341 calories, 1.6g salt and admirably low levels of saturated fat and sugar. Obviously that doesn’t take into account the spaghetti.

For dessert we were served a brownie from the Knead Bakery with dairy-free ice cream. It was pretty delicious, but gluten-free brownies have become a bit of a joke in some circles (or maybe that’s just me being weird!). Every time a restaurant or business wants to expand their gluten-free options, they ALWAYS go for the brownie! 🙂 As I’ve said before: VARIETY, people! 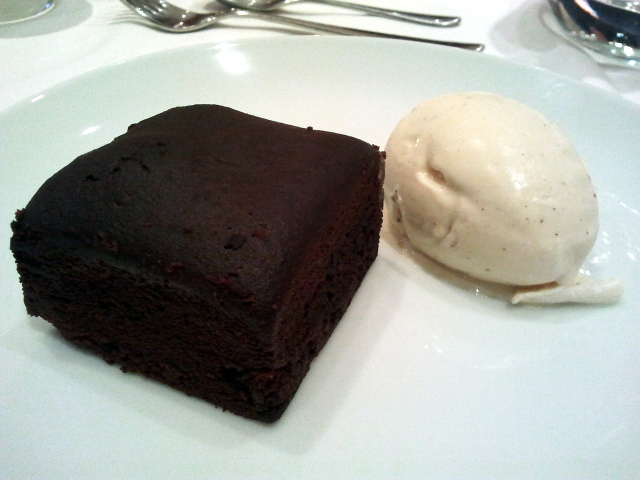 Gluten-free brownie from the Knead Bakery

However I’m not one to complain about a delicious brownie being placed in front of me, and I scoffed the lot so I’m hardly in a position to bitch about it 😉

Overall, I was impressed with ilumi as a brand, and intrigued by the rest of their meals. I will get the opportunity to try a few more samples in due course, which I will review here. They had a great attitude to dealing with bloggers and were really interested to know what we thought (and to hear our gluten-free ranting!). Thank you for a great evening!

Their food was of much higher quality than other ready meals I’ve tasted and although I didn’t like the meatballs as much, I think they’ve done very well for a nut, gluten and dairy-free brand in terms of flavour, presentation, variety, price and marketing.

Currently they are available to buy online with a great introductory offer (valid until the end of June): when you spend over £20 you get a whopping £10 off! This is a great chance to sample some of the products and see which ones you like!

« 7 gluten-free foods you should look for in an Asian supermarket
The Allergy & Free From Show takes place in London this weekend! »