The weekend before last I spent 3 full days at the Allergy & Free From Show held in Kensington Olympia. It was my first visit to the show, and I definitely got a unique perspective of the event – helping out my friend Isabel on her stand. Others (gfreeb, gfradio) have written reviews of the show, but I think there are so many different angles to be covered that there is still room for me to have my say. (Ha, I’d like to think so anyway!)

There were so many good things about the show that I barely know where to start. The idea of having a whole bunch of Free From exhibitors under one large roof is far too exciting for anyone accustomed to staring glumly at the FreeFrom aisle. The phrase “kid in a candy shop” comes to mind. Gluten-free foods were by far the most prevalent, and aside from the adjoining veggie “V Delicious” show, there wasn’t much that contained gluten. There was also a great deal of variety – pizza, pasta, ready meals, paninis, cakes, cookies and bread. 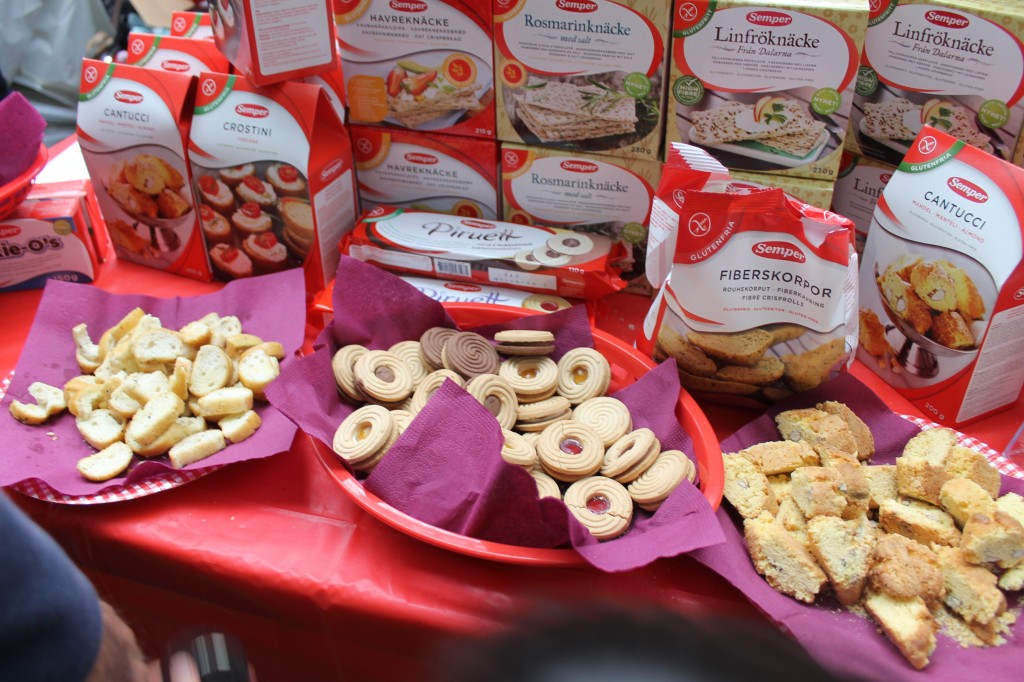 Gluten-free samples from Semper, a brand I had not heard of before.

The best thing about the show is the ability to taste things that are normally only available online. I don’t know about you, but I have at some point picked up almost every product in the FreeFrom aisle just to see what it’s like. But I can’t say the same of products only available online. The cost of postage normally puts me off. So it was really great to be able to try these things (and FYI, some of them are REALLY good!). 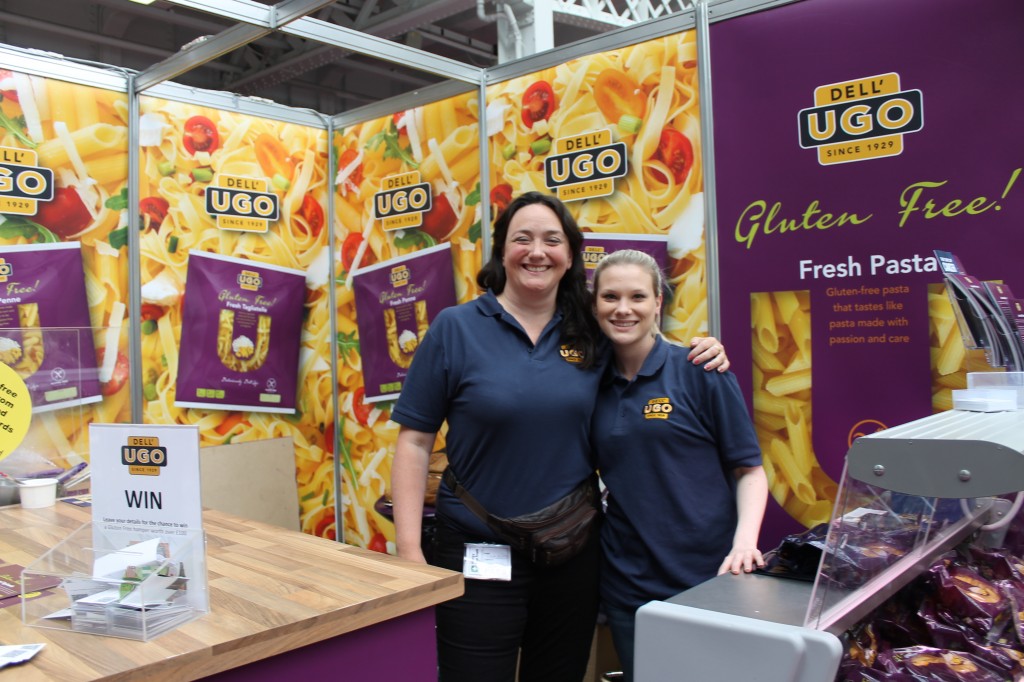 Community plays a huge part in the show too. Sure, some people turned up alone, but there were quite a few meetups, Tweet-ups and so on. I was also very flattered that so many people came up to me and said “I follow you on Twitter” or “I read your blog”. The support that we give each other is something to be very proud of, and makes being a coeliac or having food allergies so much easier when we are having a bad day. 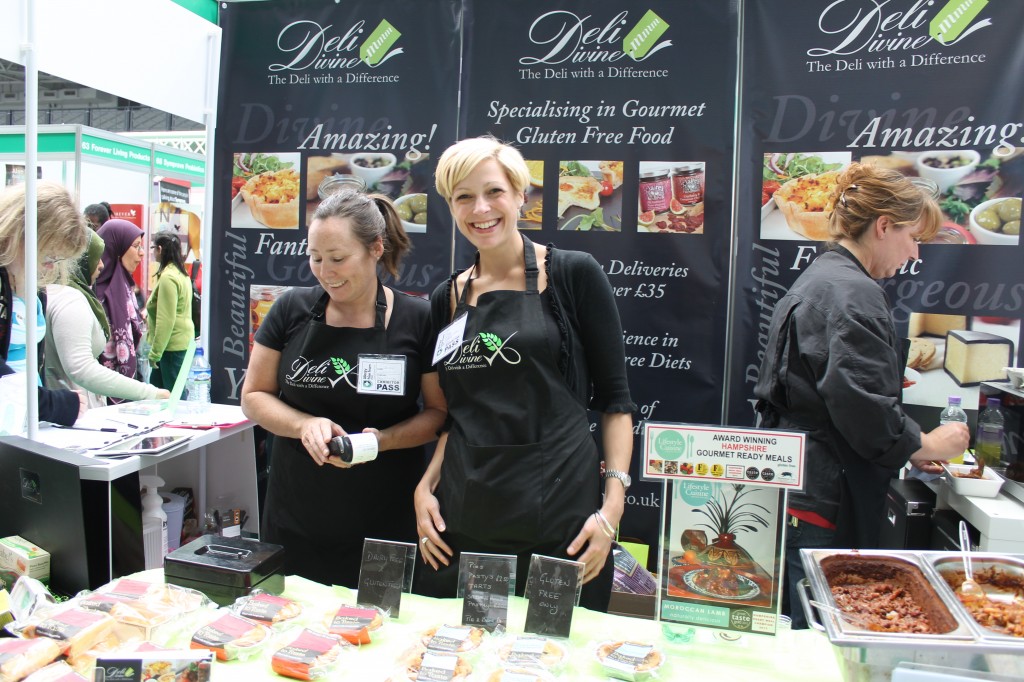 The lovely ladies from Deli Divine

Working on Isabel’s stand gave me the opportunity to meet so many people, and it was pretty fun too. It turns out, it’s very easy to sell a product that you love, and we had a lot of people stocking up like crazy!

There is clearly huge demand, interest, and growth in the gluten-free sector, and right now it’s better than ever to be diagnosed with coeliac disease or gluten-intolerance. Even in two years the range and quality of products has increased dramatically and looks set to keep going. I became aware of loads of new brands, now just need to go back through the show brochure systematically as I know I missed some!

Boy, was it busy! Friday was quite relaxed but Saturday was insanely busy and Sunday only a little less so. On Saturday there was serious overcrowding and bottlenecks, and as someone who is less than keen on crowds at the best of times, I felt quite anxious when I had to pick through the crowd. There were people in wheelchairs who struggled to get through some of the aisles as they were quite narrow. A lot of people reported being shoved, or being unable to get up to a stall they wanted to see. I’m not sure how the organisers could best get around this other than get people to get tickets for certain timeslots to stagger entry. 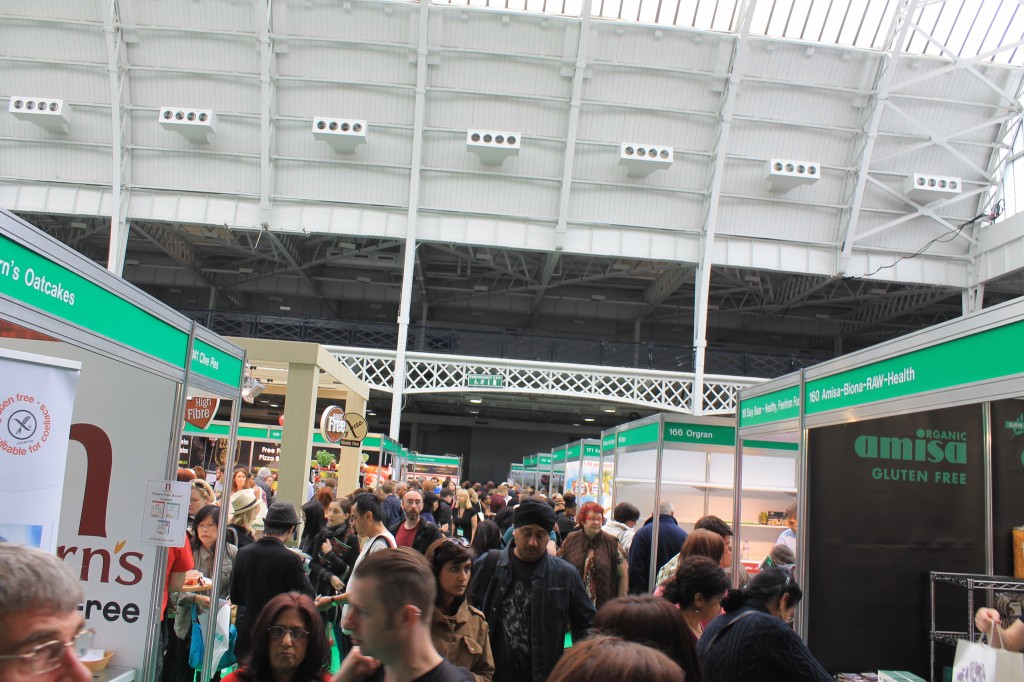 The crowds on Friday, the quiet day

It’s a shame as it was difficult to really talk to people at stands and some people were completely oblivious to others around them. As a Londoner I really felt some people needed to pick up the walking pace! 😉 But in all seriousness, the crowds were unpleasant.

The fact that the V Delicious show was on at the same time was a slight negative. Some of them had signs up saying “we are NOT gluten/wheat free”, as presumably people were just going for the samples without really asking about the ingredients (why anyone would do that, I don’t know!). I know it’s not a “gluten-free” show, and for those with dairy or egg allergies, vegan products could be of interest, but I felt that there should be better signage and systematic labelling of what’s in the samples throughout the show.

There was also a section of the hall dedicated to skincare, beauty products, and a certain amount of alternative medicine. I have no doubt that this could also be useful to those with food allergies, but the fact that there were essentially 3 shows going on under one roof  did, I’m sure, contribute to the overcrowding. The presence of the alternative medicine somewhat annoyed me as those with allergies, chronic pain and other conditions that are hard to treat are more vulnerable to spending their money on the hope that maybe this product will help them. (Anyone want to induce more alpha brain waves? There’s a product for that!)

At the risk of being overly negative, I feel I should talk about the ugly side of the show. This didn’t really come from the show itself, but from a minority of the people there who spoiled it slightly for the rest of us. On a stand you obviously get a different perspective, but I also encountered a lot of rude behaviour as I wandered round.

A couple of times, people actually asked us questions and as we answered them TURNED AROUND AND WALKED AWAY. This pissed me off to no end as they had this attitude of “Oh, we are superior. You are but a lowly stand monkey and I am uninterested in what you have to say”.

A minority of vegans came with an attitude (clearly uninterested in the Free From part of the show) and actually MADE FACES when we said that not all the products were vegan. I should point out that egg allergic visitors were actually, on the whole, very friendly. There were also some really awesome vegans that I met at the show, but a few really left a sour note.

And then there was the sample etiquette – or lack thereof. There were a surprising amount of people who lived locally, without any food allergies, who actually just came to grab some free food. I know this because they told me so. Many people with kids also allowed them to put their hands ALL OVER THE SAMPLES. At any food show this would be bad enough, but in a show where cross contamination could result in anaphylaxis it is simply inexcusable. I do love kids, but given that many of these kids had been touching who knows what, this is a huge cross-contamination issue and parents should be way more responsible about this. To be honest, as I saw the general fondling of food by everyone (adults included) I was a little worried for people’s safety. 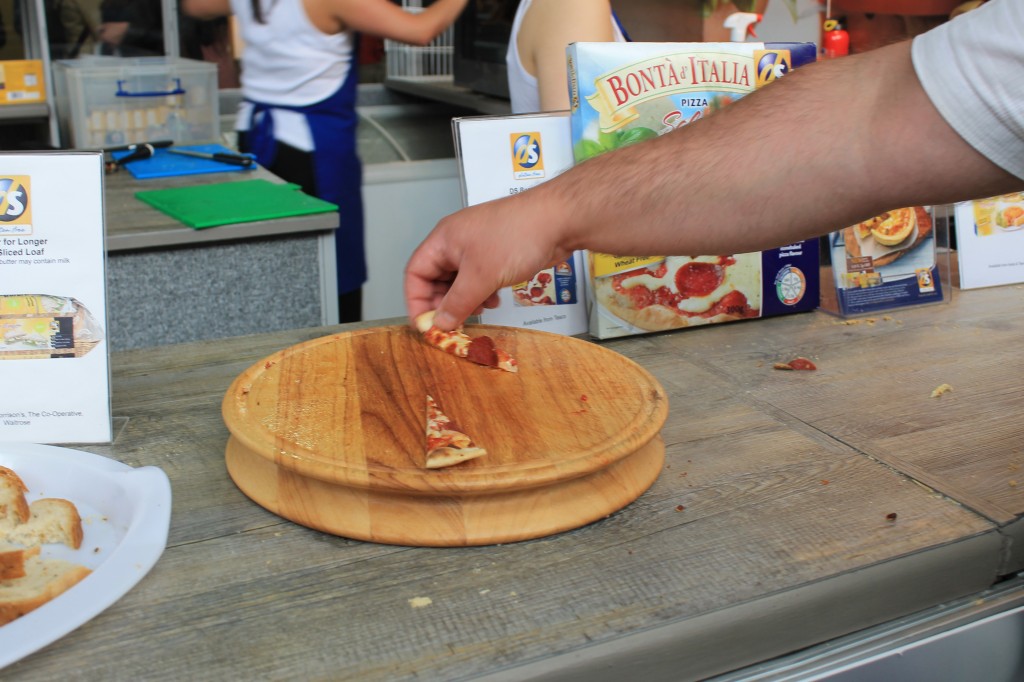 Apologies for the rant, as I said, the ugly part of the show really came from the attitudes of a small section of the visitors. The positives really outweighed the negatives (apart from the overcrowding, which I don’t cope well with at all).

There were many brands out there that I had never heard of – and I make it my business to find out about gluten-free food. If I haven’t heard of them, how are they going to get their name out there to the average gluten-free consumer? How do we connect consumer to producer the rest of the year? This is something I’m still not sure on the answer, and food shows will definitely make up a large part. I think bloggers can help too, and I’m always on the lookout to review gluten-free products on this blog (and for the app, Can I Eat It? – where I also review gluten-free products). So please, send me your products – I want to help you!

One other thing that bothered me was hearing the producers talk about how hard it is to break into supermarkets. Only a small handful of brands are available in stores, but almost every visitor I spoke to asked us “what stores are these available in?”. Gluten-free customers WANT to buy their food in the supermarkets, so it baffles me how supermarket buyers seem to always say there “isn’t enough shelf space”.  I really think supermarkets need to wake up and smell the unspent money.

(NB: many of the gluten-free producers sell on Simply Free or Ocado – it’s well worth setting up an account with one of these)

Regarding the crowd issue, I’m not sure that the organisers or producers would see it as an issue – more people coming to their show can’t be a bad thing! But I would highly recommend implementing ticketed time slots to stagger entry – I can’t be the only person who was put off by it, and if I had been a visitor I would have stayed for a much longer amount of time had it been a bit calmer.

Overally it was a fantastic experience, not to be missed. If London was too far to come, there is The Allergy & Free From Show North in October, held in Liverpool. Many thanks to the organisers for such an unforgettable event!