Saf Restaurant and Bar is a little restaurant nestled into the upstairs “food court” in Whole Foods, High St Kensington. I went shopping with my mum and, as both of us are coeliacs, I did a little research into what coeliac-friendly food is available in the area. We considered Wagamama, but they only have a few menu items that don’t need adapting to be gluten-free and we wanted to try something new.

Saf is a vegetarian place with a lot of vegan options, and seems very gluten-free friendly from the menu. The burgers are served with gluten-free buns (even though the contents may not necessarily be gluten-free – more on that later), and the overall feel of the food options smacks of “grown-up hippy”… a lot of “crunchy” vegan options but presented beautifully. And a slight whiff of being a bit nuts. 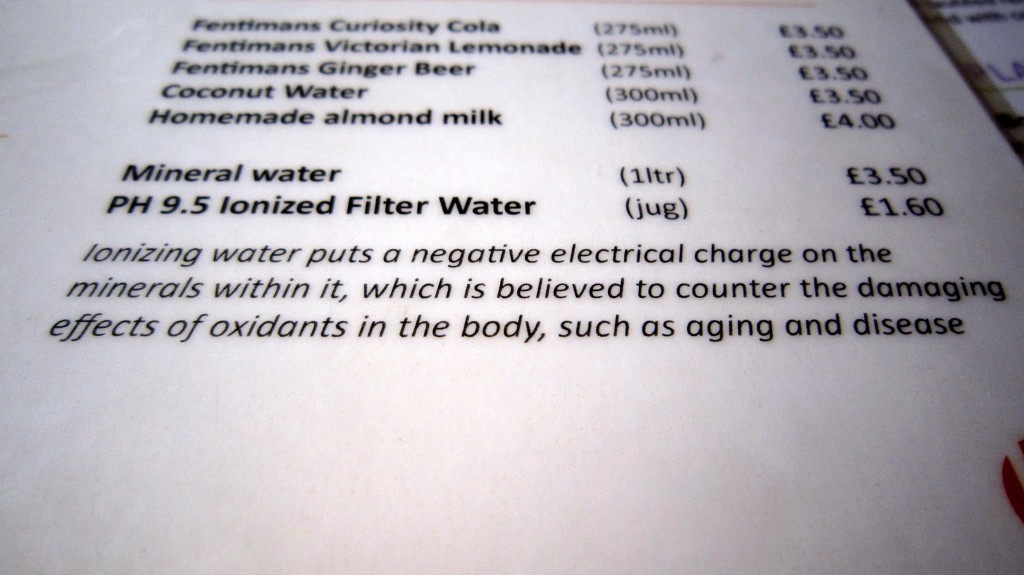 We went on a Saturday lunchtime and unfortunately a lot of the options were unavailable – like the risotto, which I had planned on having, so neither me or my mum got either our first or second choices. Sad times. Luckily the staff were extremely knowledgeable about gluten and what was gluten-free on their menu, which was lucky as I found the menu a bit misleading. For example one of their burgers is served on a gluten-free bun, but is not actually gluten-free, while the other one is. 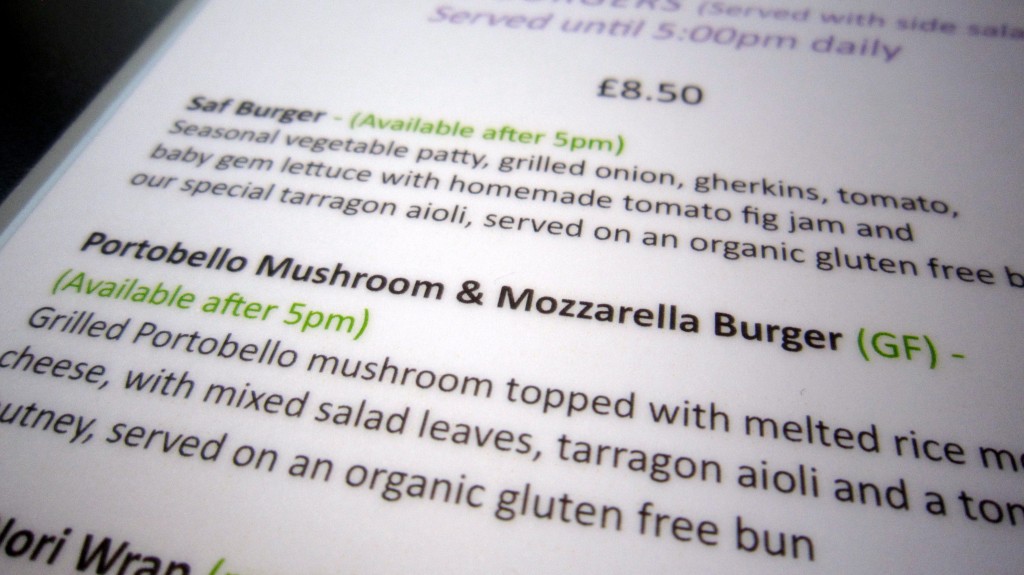 It was a freezing cold day, so I got the “Moji-tea” (like Moji-to… geddit?) which was basically a cross between a cup of tea and a cocktail. My mum got the winter warmer tea.

My burger was a little disappointing. I hadn’t noticed it had said rice mozzarella so I basically ended up with a mushroom, some fake cheese and a bit of salad atop my bun. 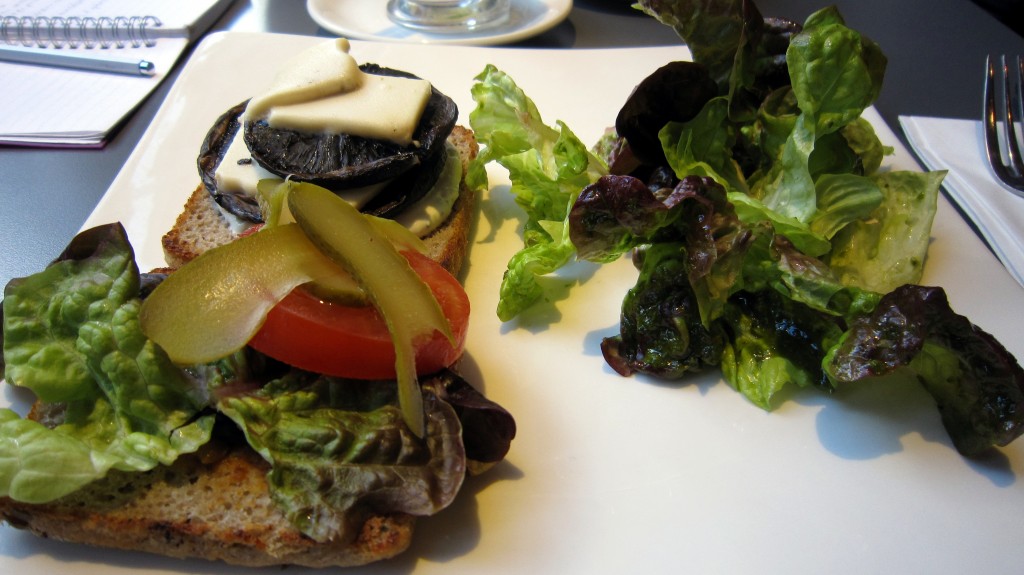 The bun itself was horrible. It tasted like what I imagine gluten-free bread tasted like 10 years ago. I don’t know what grain they had used to make it, but it tasted quite dense and bitter, almost like rye (but not!).

My mum’s meal, on the other hand, was great. She had ratatouille served on a chickpea pancake with vegan aioli (actually quite nice!) 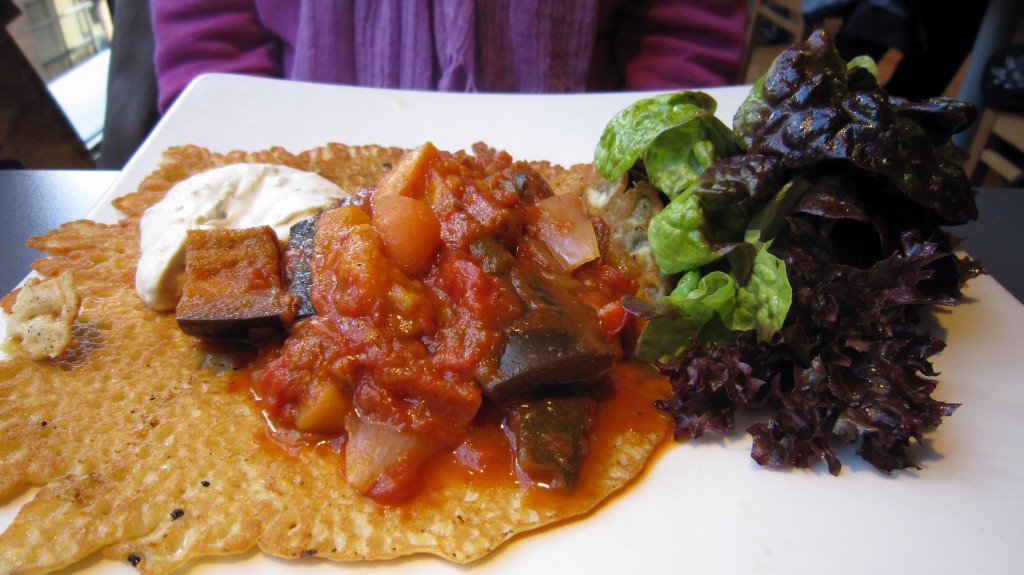 I was vegetarian for about 6 months in 2009 and I found it quite easy apart from the fact that I never quite felt full up. Hence, I put on some weight because I was eating so much more (disclaimer: this was before I was diagnosed). Still, after my meal, I definitely felt hungry for more, so me and my mum decided to split a dessert. We ordered the Pineapple and Coconut Cheesecake. 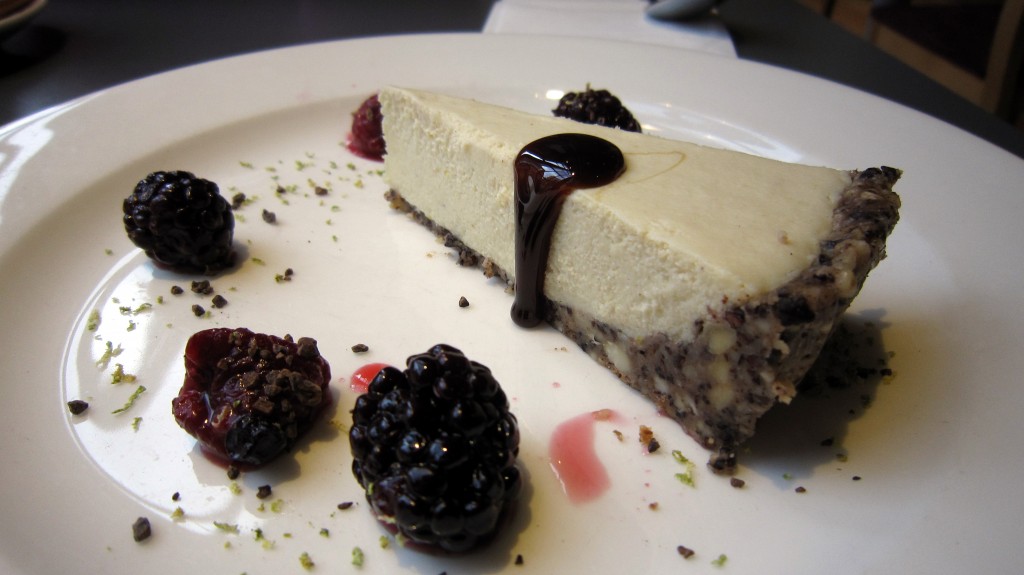 My mum has more of a problem with dairy than me but we had different opinions on which bit of this we liked. My mum produced this brilliant quotation: “Not ‘cheesecake’ but full marks for producing something very acceptable”, which I thought was the most polite put down I’ve ever heard! 😉

Her main issue was with the filling, which was made with coconut cream, and apparently wasn’t cheesecakey enough, but I loved it! The base on the other hand, I wasn’t so keen on, while my mum thought that bit was great.

Overall it was a decent dining experience, especially for those who must eat gluten-free but also wish to eat vegetarian or vegan. You guys get it hard, so it’s great there’s a place for you! It was unfortunate that many of the options were unavailable when we went, but even still I’m not sure I’d make a point of going there again.