This week I was thrilled to take part in a small event for bloggers at the Newburn Bakehouse, Warburton’s dedicated gluten- and wheat-free facility in Newburn, just outside Newcastle upon Tyne. After the rebranding, which I covered in January, I was interested to know what else they have up their sleeves, and when they said I’d be getting a tour of the bakery itself, I was more than a little excited.

In the coming months, Newburn Bakehouse will be launching several new products – a 600g seeded loaf, a pack of two baguettes and a fruity morning muffin. The seeded loaf is REAL BREAD SIZED. It’s weighty and squidgy and lovely. This was my favourite product. 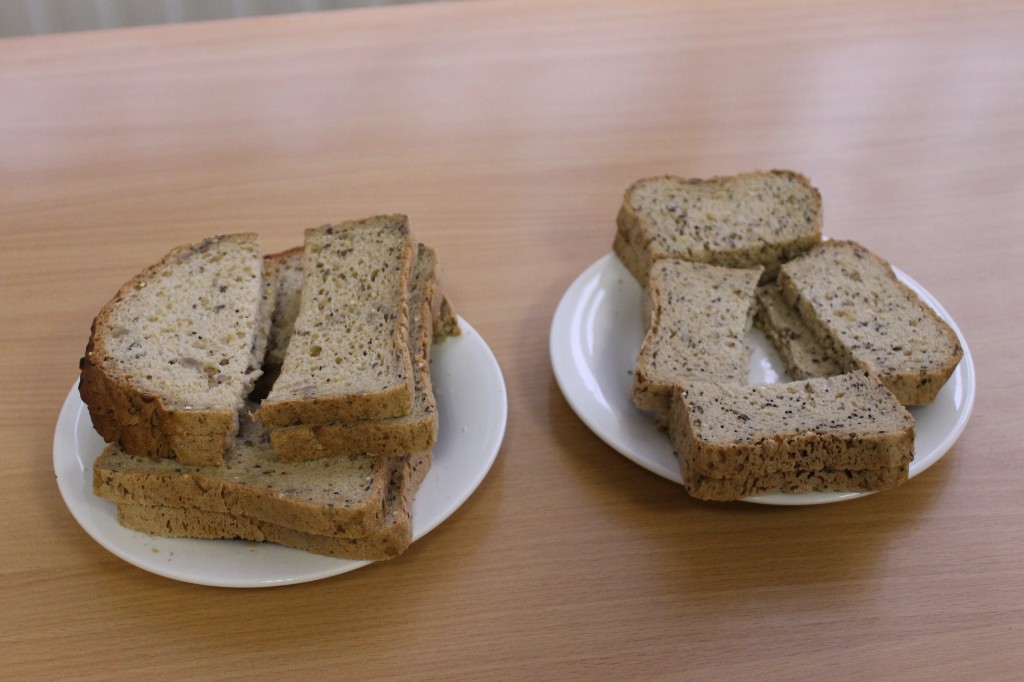 We tasted the baguettes from within the test kitchen where Dave, the chief tester, toasted them up for us. They have really achieved a remarkable texture with the baguettes. 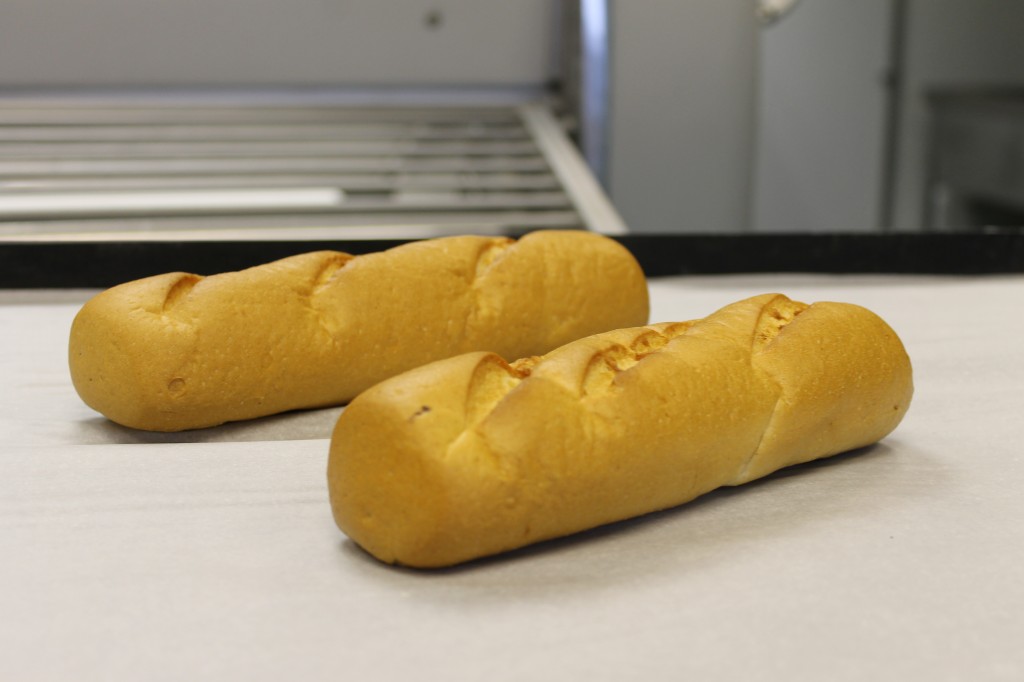 I found them to have a slightly bitter taste from where the starch caramelised slightly in the oven, but the texture was absolutely spot on. They are also a great size for a nice, filling lunch and are only 200 calories per baguette! This pleases me as it means I can load up on brie and bacon guilt-free.

For lunch we were given a feast of teacakes, sandwiches filled with delicious fillings, crisps and hummus, none of which sounds that exciting, but the novelty of having an entire table of food which was safe to eat made the experience feel incredibly indulgent  It was all I could do not to keep loading up my plate. 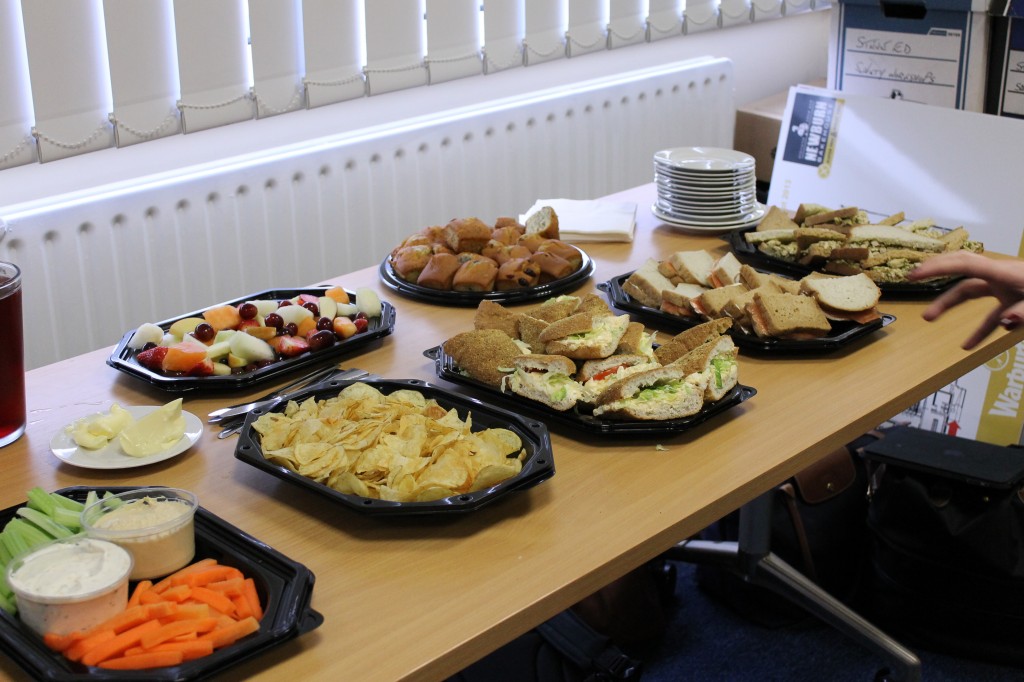 But enough of my gluten-free gluttony, on with the bakery tour! 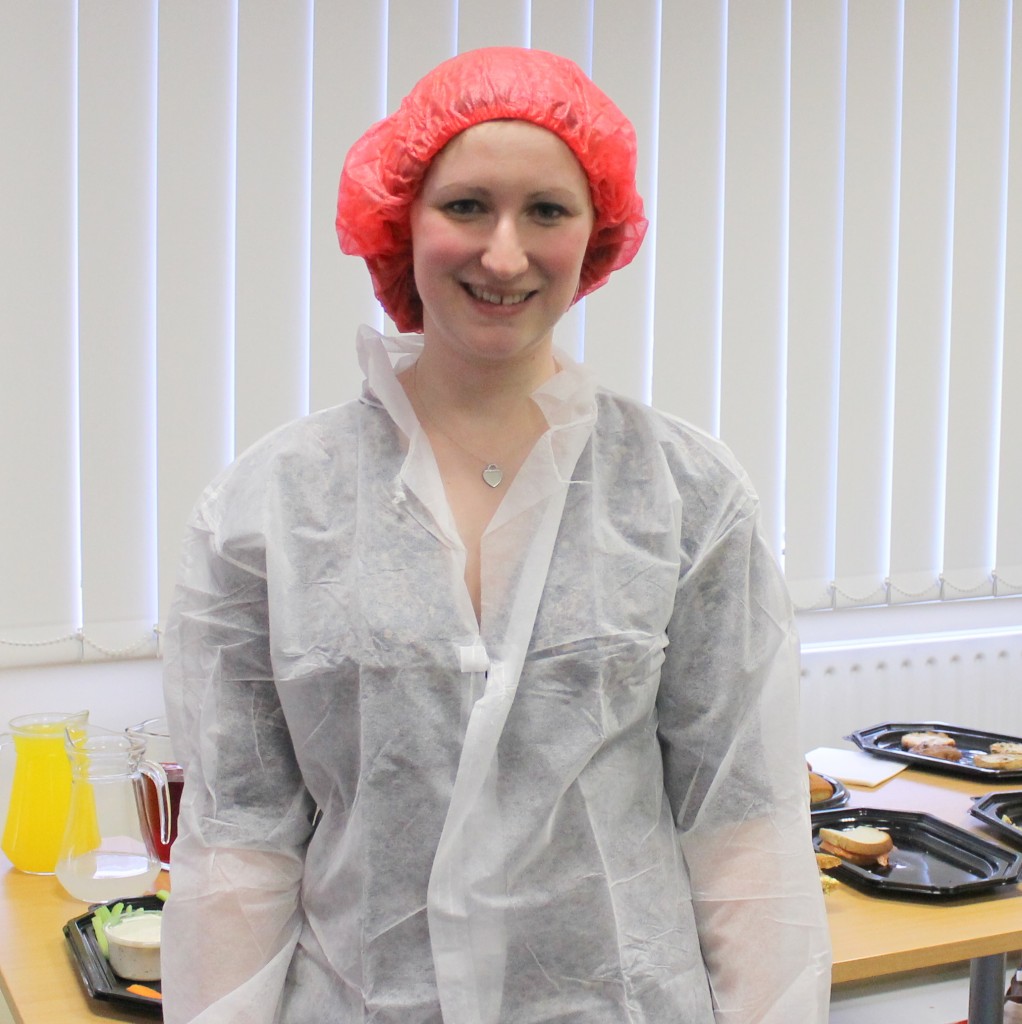 The reason everyone wore disposable overalls, like the one pictured, is because the different products have different allergens in them (e.g. egg, milk). After each batch (not just after the shift), the staff member removes his overalls, thus preventing any cross contamination. Clever, huh?

To be honest, what surprised me the most was how small scale the operation was. I’ve never been to a bakery, or any sort of manufacturing environment before, but I always imagined endless machines whizzing nonstop in a vast warehouse with hundreds, if not thousands of employees. By contrast to the wild fantasies of my imagination, the Newburn Bakehouse only has around 25 bakery employees, and they currently do one shift a day. The good news for them is that they are only operating at 60% capacity, giving them scope for some quite significant expansion. The other thing that struck me as we were shown around is how many of the processes are manual rather than automated.

We walked past rooms and signs with exciting and weird sounding names, such as the “Muffin Mixing Room” (my personal favourite), and saw for ourselves the multitude of ingredients that goes into gluten-free bread compared with normal bread. 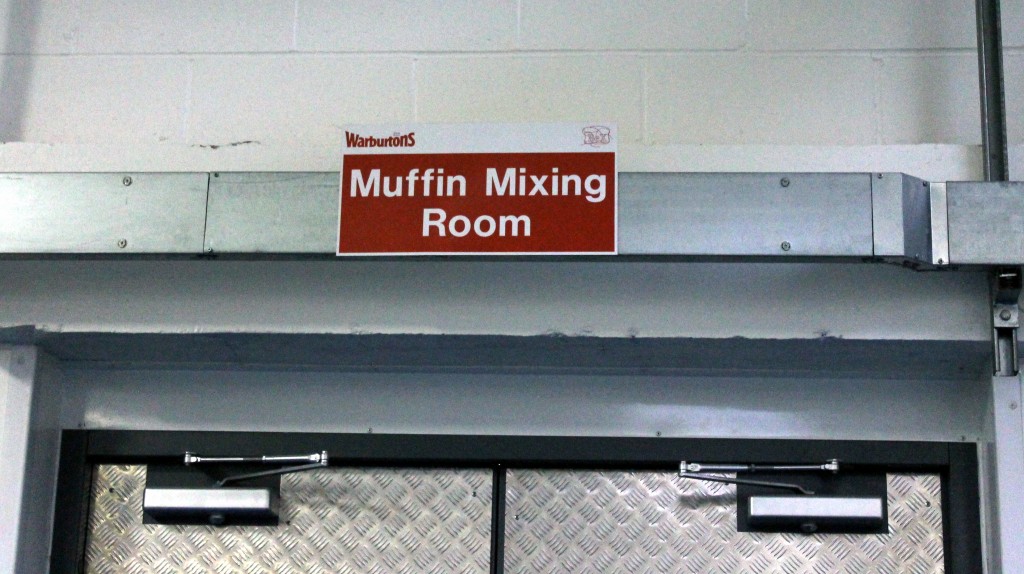 I wonder what they do in there?

Just a few of the ingredients: 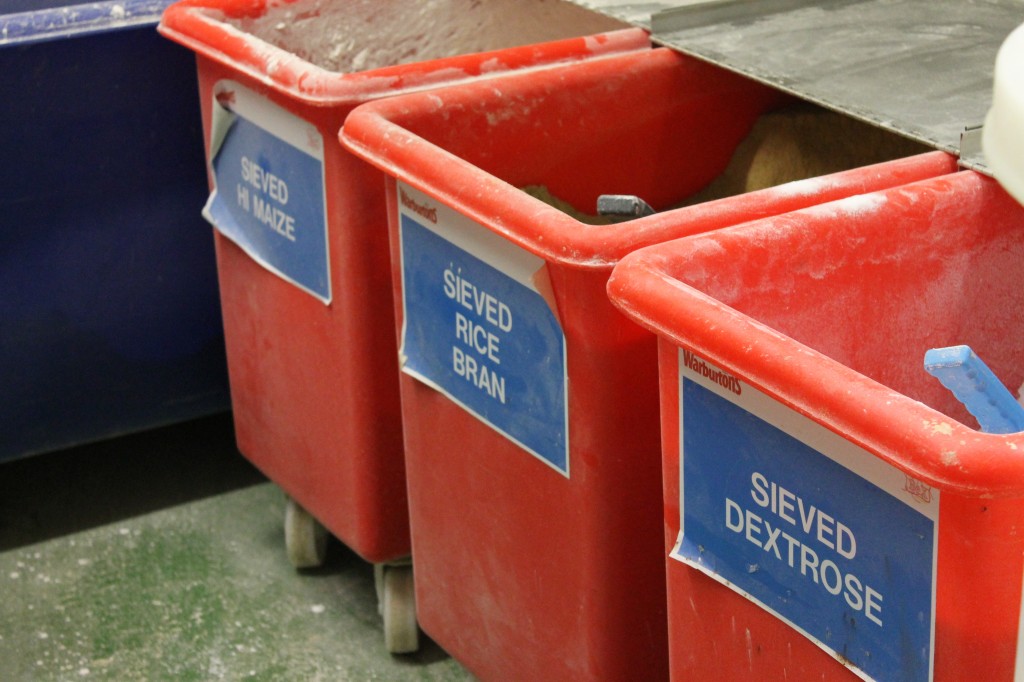 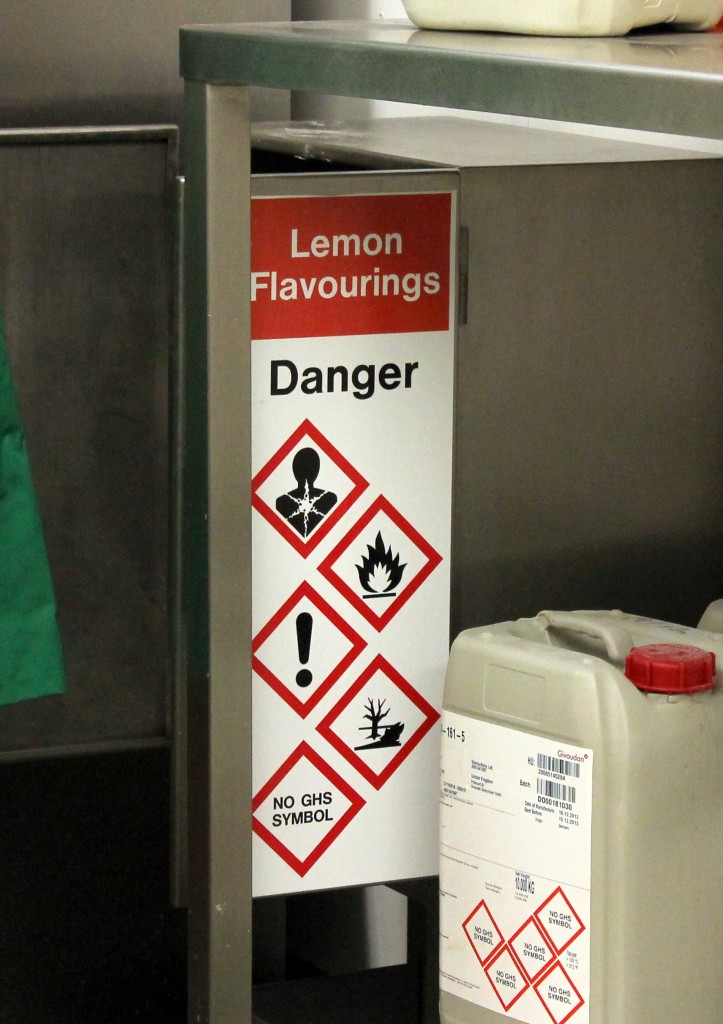 We did get to see a batch of lemon and poppy seed muffins go in and come out. A great trick I learned is that they place what is essentially a lemon sweetie on top of the batter, which causes it to split as it bakes! 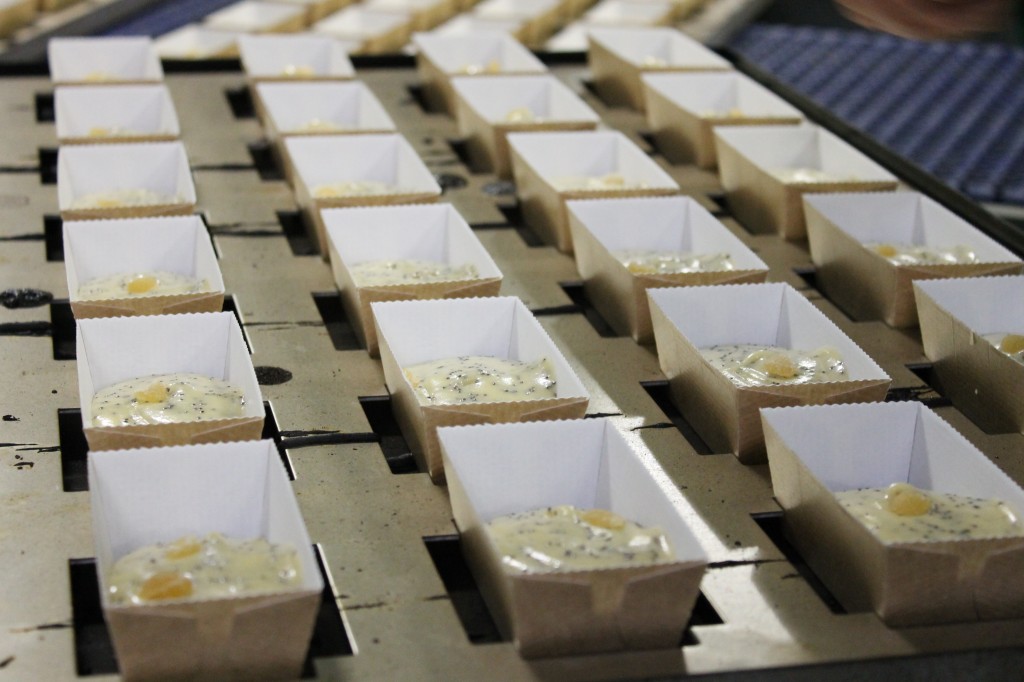 As you can see, they put each one on by hand so they are not quite uniform!

We did get to taste them as they came out of the oven – the smell in the bakery was divine! 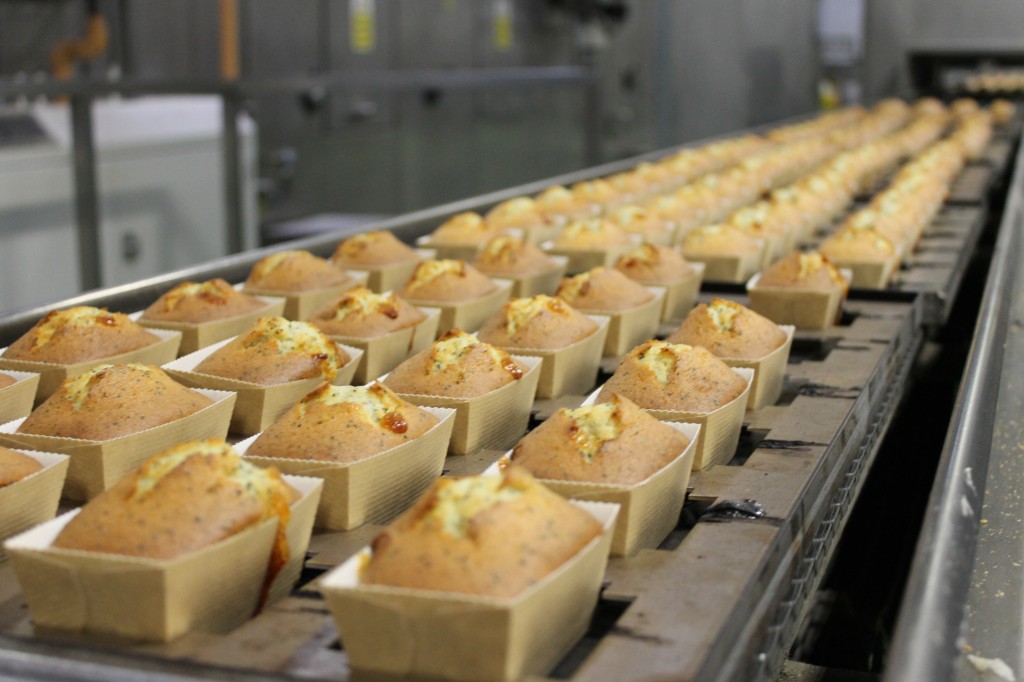 It was a pretty carb-filled day, overall! 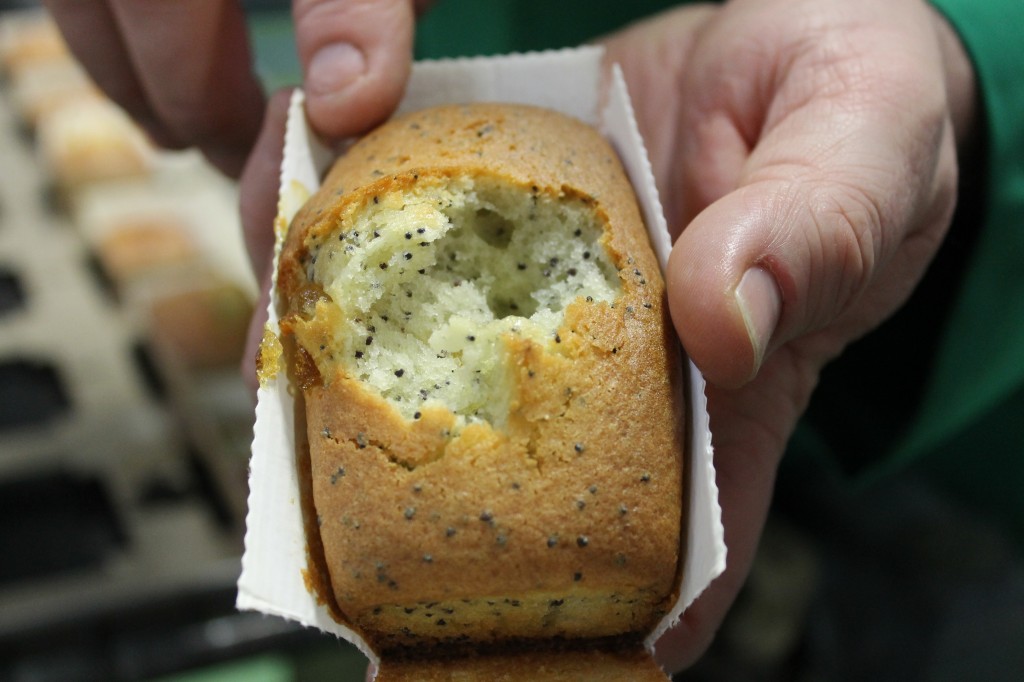 A few reflections on the day

Overall I found the day to be absolutely fascinating, as I got to understand some of the processes involved in producing gluten-free products that I hadn’t previously, and it opened my eyes to the reasons behind some of our most common gluten-free complaints: the high prices, and the crumbly nature of gluten-free bread.

The price of gluten-free products

After walking around the bakery, and on further reflection afterwards, I have begun to realise why prices are so high. And no, it’s not the manufacturers ripping us off! (If anyone, it’s the supermarkets, but that’s a different blog post for another time!)

The bakery itself is much smaller than I had anticipated, and many processes are done by hand. Its daily output is also quite limited. Seeing the large number of (expensive) ingredients that go into the bread to give it a good texture, flavour and freshness was also quite eye opening! So if you consider the raw ingredients, and note that Newburn Bakehouse (and presumably other gluten-free producers) don’t benefit from economies of scale like their gluten-y counterparts do, suddenly their prices are more understandable. One thing to note is that it is the supermarkets who set the price of their products, not Newburn Bakehouse, so it can be worth shopping around to find the best deals.

As more people are diagnosed with coeliac disease, gluten intolerance or IBS, demand for these products will increase and costs should come down. So do your bit and encourage people to get tested 😉

Something that occurred to me as I was tasting the variety of samples on offer was how fresh and springy it tasted. How do they get it like that when I have a brown sliced loaf at home whose crusts had fallen off? As Chris Hook, the Director, began to explain the issues they face with distribution, I began to understand why even the nicest gluten-free bread can be hit and miss on the supermarket shelves.

Newburn Bakehouse bread should actually be fresher than most because it piggybacks on the main Warburton’s distribution network, which makes for a more efficient chain. However, as gluten-free bread is still a “niche” product, it is usually replaced by supermarkets at most once a day, compared to 12 times a day for the regular bakery products! This explains why so often we are faced with empty shelves in the FreeFrom section. Then supermarkets say that the product isn’t selling well – but of course it won’t sell if it’s not out on the shelves. This is something that is clearly frustrating to the manufacturers too. We can do our part to help by ASKING for a product if it isn’t there, and letting the supermarkets know that there is the demand and they are not supplying for it.

Another thing to note is that gluten-free bread typically has a shelf life of up to 12 weeks. That’s a long time for bread, and explains why the same brands can be very inconsistent in terms of quality. This is why I’ve bought Newburn Bakehouse bread one week and thought “this is amazing!”, only to get a dud pack from Tesco next time and be disappointed when the crusts fall off. I suppose the best way to prevent this at the consumer end is to check the “best before” dates and pick the loaf with the furthest away date! But this is something that Newburn Bakehouse are keenly aware of, and actively striving to overcome. Piles of crumbs don’t look good for their reputation, and are a world away from the fresh and delicious product they produce.

During my visit I tried my hardest to remain impartial, even when offered piles of yummy sandwiches and copious amounts of tea and coffee. I’m not being paid by them, nor can I see what I have to gain from sycophancy (other than more free sandwiches). So there’s my disclaimer (Also, I would like to add that the reason I am covering them is because they invited me. So should any competitors want to hold a similar event, I would be delighted to attend…)

Chris Hook, the Director of the Newburn Bakehouse has been personally responsible for shaping much of the FreeFrom market over the last 20 years (he founded the Dietary Specials brand). Due to his son’s wheat intolerance, he has first-hand knowledge of how difficult it can be on a gluten-free diet, and his passion for the sector shines through whenever he talks about it. The staff at Newburn Bakehouse refer to the bakery as their “newborn” (har har, geddit?). In all seriousness though, by visiting them you could really see the care that goes into their products, and that really made me warm to them as a company.

Not only that, but the fact that they invited a group of bloggers round for lunch speaks volumes about the attitude they have towards their customers. They genuinely wanted us to love their bread! They wanted to know our ideas for new products (*cough*doughnuts*cough*). And of course, bloggers are an effective way to do your marketing for free, but wouldn’t you rather have me being unpaid and bribed with sandwiches than see them run an expensive TV ad and have to raise their prices? 🙂

I saw a lot during my time there that I’m not allowed to talk about (or they’d have to kill me), but suffice to say that they are feverishly working on new products as we speak. The rebranding as Newburn Bakehouse is allowing them to branch out from the standard bread products, and I heard the words ‘pizza’, ‘lasagne’ and ‘biscuits’ being bandied about when they discussed their ideas for the future. Their commitment for the current products to taste “as good as” regular Warburton’s products is admirable, and I wonder how they will fare when moving away from what they know best.

I had such a wonderful day out and I would like to say a big thank you to Chris and the team at the Newburn Bakehouse for being so warm and hospitable!

For a different perspective of the day at Newburn Bakehouse, have a look at Gluten Free B’s website, where she raises some very important points about responsible food production.