Warburtons is a long established bakery brand in the UK, and their range of gluten and wheat-free breads is prominent in the FreeFrom aisles of most major supermarkets. Now they are looking to strengthen their gluten-free credentials by rebranding their FreeFrom department as the Newburn Bakehouse, named after the dedicated gluten and wheat-free factory in which all their products are made.

A few weeks ago, I spoke to Chris Hook, Business Director of Newburn Bakehouse, about the upcoming changes, how gluten-free is a family matter for him, and why gluten-free doughnuts are so hard to come by:

The Happy Coeliac: Are you bringing out any new products with this rebrand?

Chris Hook: Not initially, the rebrand comes out this weekend, so the next packaging will start coming out on shelves from the beginning of next week (W/C 14th Jan), and that’ll be on the existing range. But coming into late February and March, there will be new products coming through. The first one will be baguettes, and then a large (600g) seeded loaf.

THC: How do you decide which products you want to bring to market? Do you base it on feedback from customers?

CH: Because of the way we’re set up now we have a lady who spends a lot of time out in the community, talking to groups of coeliacs and gluten-sensitive people on a regular basis, and running meetings and so on. For example she had a sensory taste panel that she was running yesterday over in the Wirral, and we were looking at some other products there, so essentially we listen to what people are asking for. Of course with us being Warburtons, there’s an expectation from people, understandably, for us to mimic a lot of the traditional Warburtons mainstream bread and baked goods. So that’s how we tend to operate. One is with consumers, and also talking to our colleagues at – we call them “Core Bakery” – and looking at what’s selling well for them and what’s popular and then try and mimic that in a gluten-free product. Because you know yourself with a restricted diet, you just want to eat, basically, what everybody else is eating!

THC: Do you know anyone yourself with coeliac disease? I suppose there’s probably a few people working there who do..?

CH: Yeah, there’s several people working here, in fact a young lady who’s just joined our team at the back end of last year, she’s a diagnosed coeliac. There’s quite a few people on site here who are, and within the business there’s the best part of nearly 5000 people in Warburtons … so the law of averages! I used to run and set up Nutrition Point [Nutrition Point produced the Dietary Specials range and has since rebranded as Dr Schär UK] back in 1997, and one of the reasons I set that business up was to produce gluten-free foods primarily for my son who was wheat intolerant. We launched the frozen pizzas and things like that because my wife was struggling, and people still do struggle to find the right food. It’s adhering to the diet isn’t it? You want to make it as easy as possible for everybody.

THC: Which product has been the most popular in the FreeFrom range so far? Is it something like the white sliced loaf?

CH:  Yeah, it is the sliced loaves, they are definitely the most appealing for people. And to be honest, that doesn’t appear to differ from whatever brand you look at. In my old business, Dietary Specials, that was always the popular one. The change is and the shift is now, is that people’s expectations are, quite rightly, much higher, so the benchmark in terms of quality, freshness, taste etc,  is much higher because the majority of people have at some stage eaten normal bread, and that’s what they want. If you think about bread, I know it’s the old adage, but it tends to be the staple product of nearly everybody’s diet. Just look at myself this morning – had some toast for breakfast and I’ll probably have a sandwich for lunch! So as the day goes on, it really does revolve around bread!

THC: Exactly! And I think that’s what makes it difficult for people who live with others who eat normal bread, is that there are breadcrumbs everywhere!

CH: Last year I was having a chat with Jonathan [Warburton] and he was saying that people were coming to them as Warburtons saying “Why aren’t you doing this? You’re a bread manufacturer, why are you ignoring us [the gluten intolerant]?” And that was one of the things that resonated with Jonathan, he said “we can’t ignore this any longer”. Which to be fair for a major food brand is a big step for them, a big change for them to make.

THC: In an ideal world, where would you like to see the Newburn Bakehouse brand five years from now? Are there any products that you would love to have come out that you haven’t quite developed yet?

CH: The whole idea of establishing a sub-brand is again a big step for the business to make, because up until now everything has been “Warburtons”. And it’s not that we’re stepping away from Warburtons, this is “Newburn Bakehouse BY Warburtons” so you’ll still see Warburtons on the packaging very strongly. But it allows us to just stretch out of traditional bakery products  into other categories. Over a 5 year period, we want to really push as far as possible, so that we’re actually supplying and producing products that will appeal to everybody at every meal occasion. Now that could be pasta, it could be ready meals, in some respects it’s a fairly open book in terms of where we go, but the idea is, get the building blocks in place now so it enables us to do that.

THC: Can I make a request if you do get to that point?

THC: Could you please make doughnuts? Because you can’t find gluten-free doughnuts anywhere!

CH: Yeah… we’ve tried that in the past, and do you know what the biggest problem is?

CH: Making them is not a massive problem – you can do it – but it’s keeping them fresh. Because they go stale so quickly. And the only way, initially, we could do it was to freeze them and bake them off at home… that’s the only way I could get them to market. Because I have looked at that before!

THC: Just after I was diagnosed I moved right across the road from a drive-thru Krispy Kreme and every time the winds blows in the right direction, I shake my fist and curse Krispy Kreme… so you know, I’ve had doughnuts on the brain for a while!

CH: I bet you have! The development baker worked on that earlier last year, but it’s like anything else, if you’re not careful, him and I are like children walking into a sweet shop, it’s like “let’s do this, let’s do this” and everybody else in the business goes “Oh my god! You can’t do all that at once!” And they’re right. You’ve got to be sensible. And it’s also, well have we got the capability? When you come up in February, you’ll see that there’s only so much we can achieve out of that bakery, and a lot of that is around bread-type products. So we’d require further investment to move into something like that. But we’re not ignoring things like that because we can definitely see there’s a market, there’s an appeal.

THC: Thank you so much for taking the time to talk to me, and I hope to visit the Newburn Bakehouse soon!

The Newburn Bakehouse interviewed Alex Corbisiero, an English rugby union player, about his gluten and wheat-free diet. Although not a coeliac, Alex is an advocate for gluten and wheat-free living and even has a pizza named after him in Bruschetta, a gluten-free Italian restaurant in Kingston-upon-Thames. 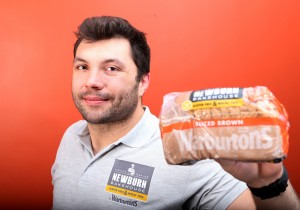 Newburn Bakehouse: Why did you go gluten-free?

Alex Corbisiero: I went gluten-free about a year ago because I was continually feeling lethargic and bloated. My nutritionist did an intolerance test and advised me to cut out wheat and gluten from my diet and I’ve not looked back since.

NB: Have you seen an improvement in your health / performance since changing to a gluten-free diet?

AC: Absolutely. My performance and general well being has improved significantly, especially on match days as I now feel less lethargic. Before I was diagnosed I would eat carbohydrates in the lead up to a game but really wouldn’t feel too great. Since I’ve cut gluten and wheat from my diet I feel great, even when I eat carbs on match day – I just make sure they’re gluten-free.

NB: What does your daily diet consist of during the season?

AC: Protein, Green vegetables, Carbs before or after training

NB: Do any of your England team mates follow a gluten-free diet?

AC: Not really, if you’re not wheat or gluten intolerant it’s such a big commitment. However, most of us do eat gluten free before a game.

NB: How important is your diet when playing rugby?

AC: It’s massively important and essential to any sports player. No matter how hard you train, diet is such a key part of performance so you have to be smart about what you eat and what you put into your body.

NB: Why are you launching Newburn Bakehouse by Warburtons?

AC: I always buy Warburtons gluten-free range because its tastes great and I like the fact that I can buy my gluten-free products from a familiar brand that is known for baking great tasting quality bread.

NB: What are your favourite products in the range?

AC: My favourite is the brown bread and also the fruit bread.