Happy New Year everyone! I hope you all had a great Christmas and New Year and are ready to face 2013 with a bang?

After the exhaustion of my book coming out and the 3-week cold I got in December, I really needed a good rest from blogging (Missed my book coming out? It’s on sale now for £8.49!). I was burned out, cranky and had the makings of a pot belly. They say a change is as good as a rest, but I had nothing to change around me, so I had to make do with a rest.

Still, I made it through and out the other side and here I am, full of hope for the new year. I’ve always loved making resolutions, ever since I was a teenager, as it gives you a chance to reflect on the bigger picture and make a fresh start. So these are the top 5 things I hope to achieve in 2013:

When I mentioned on Twitter that I hadn’t been glutened all year, people were impressed. However, the reason for this is not down to some supernatural ability to sniff out gluten, but rather due to the fact that I simply don’t eat out much. The boyfriend and I have got rather good at food shopping like ninjas, and when our weekly bill comes to below £40 a week (at Waitrose), I’m not complaining!

But sometimes I feel like I’m chickening out a bit. So it is my intention to be a bit bolder in 2013, ask more questions at restaurants, and try some new foods and cuisines. We have a very thriving Korean community in our area, and aside from soy sauce and wheat noodles, Korean has many gluten-free opportunities, so this is high on my list. Not only that, but buying food from local supermarkets (rather than the big UK chains) can actually be a lot cheaper! 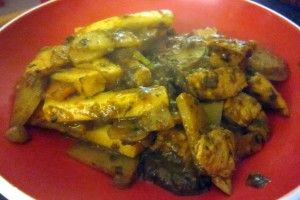 Dak Galbi – recipe from Beyond Kimchee – our first foray into Korean cooking!

I typically cook things from scratch so I do eat a lot of whole foods and vegetables anyway. However, following on from the first resolution, I want to focus on quality over quantity. We can easily spend £20 on a Friday night getting a bottle of wine and some pre-dinner snacks, so instead I’d rather put that money towards a delicious high-welfare piece of meat. Certain foods can seem expensive, but I’m trying to work out what I can cut out so that I can treat myself more often. Ideally, this way I can eat a bit more fish, shellfish and filet mignon (ahem), and of course, go nuts at Whole Foods Kensington.

3.       Learn about, and use, unfamiliar cuts of meat and less common fish, using local butchers and fishmongers.

Again, this ties in with the first two resolutions. This partly stems from my desire to eat meat from animals which have been raised in more humane conditions, but also, even the mince from our local butcher is better than the highest quality mince you can buy from the supermarket.

Using cheap and unpopular cuts of meat is a doddle if you have a slow cooker, so along with “my” new River Cottage Meat Book (i.e. the boyfriend’s!) I hope to learn more about what you can do with different parts of animals.

Gluten-free baking at Christmas was a project I started rather selfishly so that I’d have plenty to eat at Christmas. Once I had a few recipes the idea started to grow and before I knew it I had a book out! My second book will be less about baking and more about great gluten-free dinners for the whole family. I have already done quite a bit of brainstorming and planning, so I hope to have this new book out by May/June.

What a vague resolution this is, and therefore, scientifically, I’m less likely to succeed at it. During my last book I put on around 5kg – I have heard this is quite common though! I hope that through diet, exercise and being more active in general, I can increase my energy levels, get down to a more comfortable weight (as I can’t afford to buy a whole new wardrobe one size up!) and be happier! Plus, getting a bit more sunlight won’t hurt the vitamin D levels!

What are your resolutions? Do you have any specific food-related ones?