Recently a couple of friends of ours moved back to the States, and with the husband being gluten-free as well, they gave me a bunch of gluten-free products which they hadn’t used up. So this is how a devotee of cooking from scratch ended up with a ready meal in her possession. 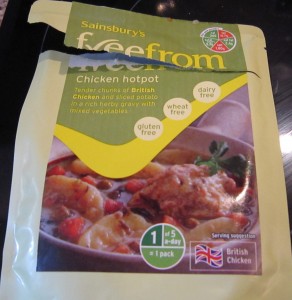 The picture didn’t look too bad, although there was a suspicious amount of (gluten-free) flour on the ingredients list. However, it was only 266 calories, and I have been needing a break from overconsumption ever since I finished baking (and eating) for my Christmas book.

But then I saw the little colour wheel of doom: 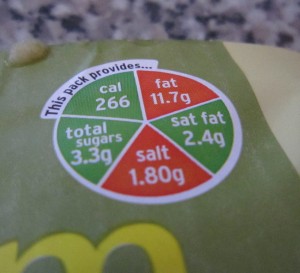 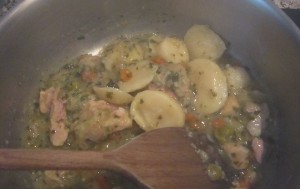 What came out of the packet

I suppose it shows my inexperience with ready meals that I still had some sort of surprise when it looked nothing like the picture on the pack! 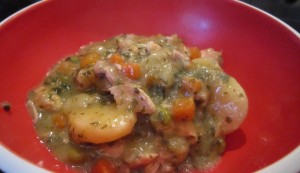 But that really wasn’t the worst bit. The only real flavour I could taste was of the salt and a sort of chickeny aroma, but the whole thing reminded me of school dinners. Not the new, posh school dinners that you can get these days, but proper 1980s mulch. I realise now why I hated vegetables as a child.

I imagine I am nowhere near Sainbury’s target demographic – they probably market this to the “hectic family”, but for less than £2.29 a portion I bet I could rustle this up in half an hour with a fraction of the salt and the vegetables still intact.