You’ve all been so excited about the new gluten-free pizza from Domino’s that I had to try it. But I wanted to show you that Domino’s isn’t your only option. We have been enjoying Isabel’s pizzas for almost 2 years now, and I have become somewhat of an evangelist for them! (unpaid, boo!)

So I decided to set up the two brands in a pizza showdown, rating on the following categories:

See how they fared in this (hopefully not too boring!) video, with help from the lovely Alex.

Isabel’s: This mix has been a firm favourite in our household almost since diagnosis. It’s not trying to be like a normal pizza, but it’s got a great, slightly chewy crust. The secret is cassava starch (tapioca). It does contain milk, but those with lactose intolerance may be able to tolerate it.

Domino’s: I actually wanted to dislike this, but it was quite good. Definitely the best pizza I’ve had outside of Isabel’s (and the thin crust pizzas at Bruschetta). It wasn’t as brittle as a lot of gluten-free pizzas can be, it had a great chew and I liked the use of corn meal (or possibly polenta?). The toppings tasted exactly as I remember them, a little too salty! Before I went gluten-free, we used to talk about the “Domino’s nightmares”, referring to the sweating and bad dreams you got after eating a Domino’s pizza. Hopefully, since this was a small, I won’t be having them tonight!

Isabel’s: Dependant on toppings but the base itself is around 300, so I think with toppings it comes out at around 600 calories. Low in salt.

Domino’s: The small regular crust pepperoni passion contains 1358 calories (!!!!!), but I can’t find data for the gluten-free crust. 1.2g salt PER SLICE, that’s 7.2g salt PER PIZZA. AHHHHH What have I just eaten? (I should have looked this up before I ate it!) Yeah, Domino’s does NOT win this category!

Isabel’s: Well, you’ve seen for yourself how easy it is. For some of you, that might be too much. It took us a while to get the method perfected, but afterall, practice makes perfect! We enjoy cooking and love the process of making pizza each week.

I simply have to crown Isabel’s the winner on the basis of its clear win of the cost and calorie categories. However, Domino’s have done a really good job of making a great gluten-free pizza that you can order with friends and not feel like a freak. I was really pleasantly surprised at how much effort they’ve gone to (with the help of Coeliac UK) to protect coeliacs and avoid cross-contamination, and the pizza they have developed tastes like PIZZA, not like a sad little bland bite of cardboard. 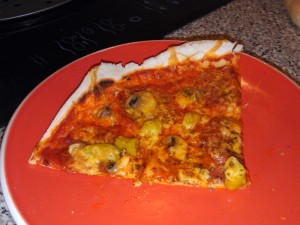 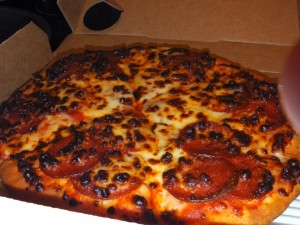 What do you think? Have you tried Isabel’s and Domino’s?