If suffering for one’s art is indicative of future success, then hopefully after my suffering last weekend my book will be a runaway hit!

Just to update those interested in my upcoming book, “Gluten-free baking at Christmas”, the content is almost written, and I am now in the process of photographing each recipe. Then comes the formatting, then the printing! It’s very exciting, apart from when I do things without thinking.

Like last Friday when I ran out of buckwheat flakes. The recipe for rum balls normally uses oats, but I’ve been testing it with buckwheat flakes since I found myself intolerant to oats when I was first diagnosed, and haven’t had them since. But when I run out right before I am scheduled to photograph them, I clearly don’t think properly.

“Oh well, I’ll just get some gluten-free oats at Tesco. What’s the worst that could happen? My gut has probably healed by now, that I might just get a bit of a bloaty tummy…”

I made up a batch, photographed them, and ate one. I took them out to meet a friend where, because I felt fine, I ate more. So far so good, slight nausea, but tummy generally behaving. We had a couple (two!) cocktails and I went home, my throat feeling a bit sore. I assumed this was because I had been talking loudly in the bar as it was quite noisy.

I woke up the next morning with a mouth full of ulcers, swollen glands and a fuzzy headed feeling I haven’t known for a while. It was a glutening without the gluten… it was an oatening!

I had falsely assumed that a coeliac who was intolerant to oats would exhibit intolerance symptoms (i.e. bloaty tummy, perhaps loose bowels). It had never occured to me that my immune system would go into lockdown and punish me for days. Lesson learned. Antihistamine seemed to help, and although I still feel a bit wibbly, I’m well enough to keep slogging away with the book.

The one upside is, look how pretty the photo came out! 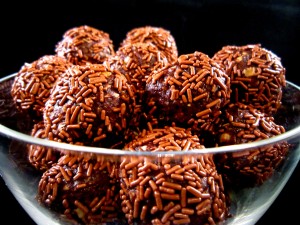 Gluten-free rum balls – responsible for my weekend’s downfall. If intolerant to oats, they can be made with buckwheat flakes (available online).

I have reached my £300 funding target, if you would like to donate further towards the costs of producing this book, all excess will be spend on ordering extra hard copies.