Belgium is not known for its fine cuisine. Yes, there are waffles, chocolates and pommes frites, but with their “national dishes” all containing gluten, it should have set off alarm bells.

Not that I didn’t do my research beforehand; I googled and googled and found out there was a Carrefour hypermarket nearby to where I was staying. Carrefour list their gluten free products here, so gleefully I rubbed my hands in anticipation of gluten-free pain au chocolat, or even *gasp* gluten-free Belgian waffles?

With this in mind I had packed a small amount of food for a 4-day trip: a box of cereal, a few boxes of Isabel’s pizza mix, and some fruit. I figured gluten-free bread and pasta could be picked up quite easily.

After a long drive down to Malmedy, which is close to the German border (and to the F1 racecourse), we went to the giant Carrefour for grocery shopping. But things were not quite as they should have been. Not only did most of the minced meat CONTAIN gluten, but most of the rest was produced ALONGSIDE gluten. It was incredibly hard just to find a MEAT that was safe to eat. I suppose I should have been thankful that they are at least complying with EU regulations to list allergens in food, but I started to feel very worried about my meals over the next few days.

They say that to ASSUME makes an ASS out of U and ME, and I certainly felt like an ass when it became clear that almost nothing in the aisle was gluten-free, and I was dancing around like a loon.

Being a hypermarket, it took me a while to find the Free From aisle, helpfully marked “diethetique”. I got so excited when I saw it that I did a little dance, and gazed in awe at the products that stood before me. They say that to ASSUME makes an ASS out of U and ME, and I certainly felt like an ass when it became clear that almost nothing in the aisle was gluten-free, and I was dancing around like a loon.

As I further processed what was going on, I noticed the products had been split into helpful sections: “sans sucre” (without sugar) “sans sel” (without salt), “Bio” (which I could only assume meant organic) and so on. It took me a while before I found the three tiny shelves labelled “sans gluten”. 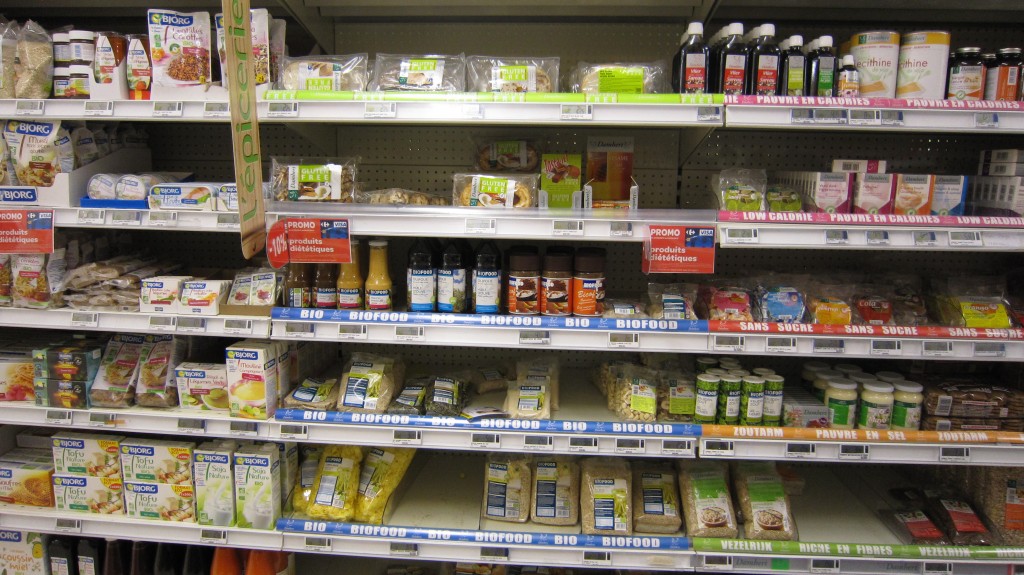 I can only assume that the coeliacs in Belgium a) live somewhere else b) buy their gluten-free food somewhere else, like the health food shop or the pharmacy or c) spend their days weeping to themselves, hugging their knees and rocking back and forth. Practically the only carbohydrates available to me in this entire place were: pasta (fusilli or penne, 250g boxes), white/brown “bread” (aka 5 tiny slices of stale looking bread-substance. Cost: €2.25), pancake mix, bread mix, and some ok looking coconut macaroons. 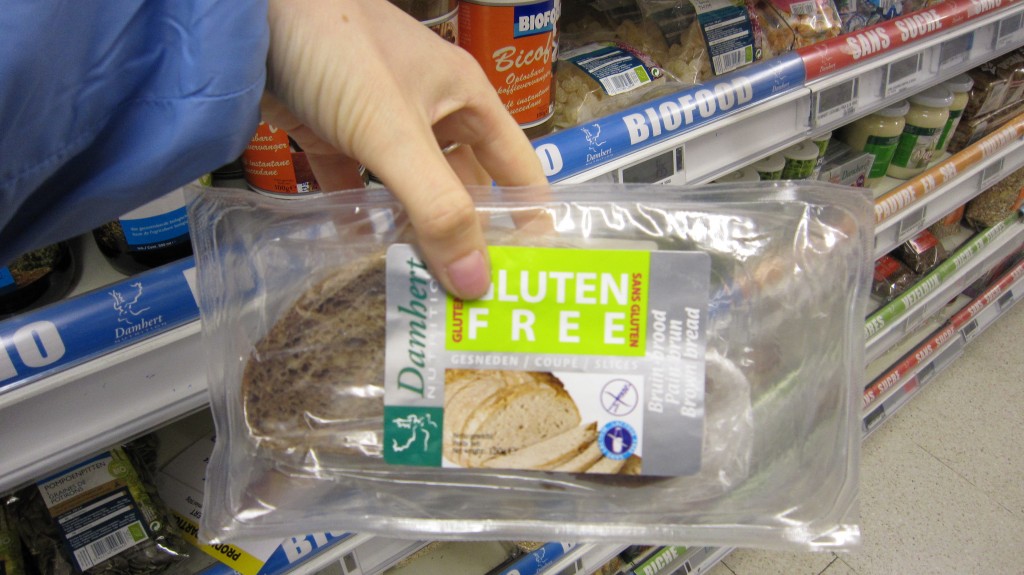 This is what passes for gluten-free bread in Malmedy – this pack contained 5 slices!

This is what the gluten-free zombie apocalypse must feel like.

Oh hey, check out the ingredients: 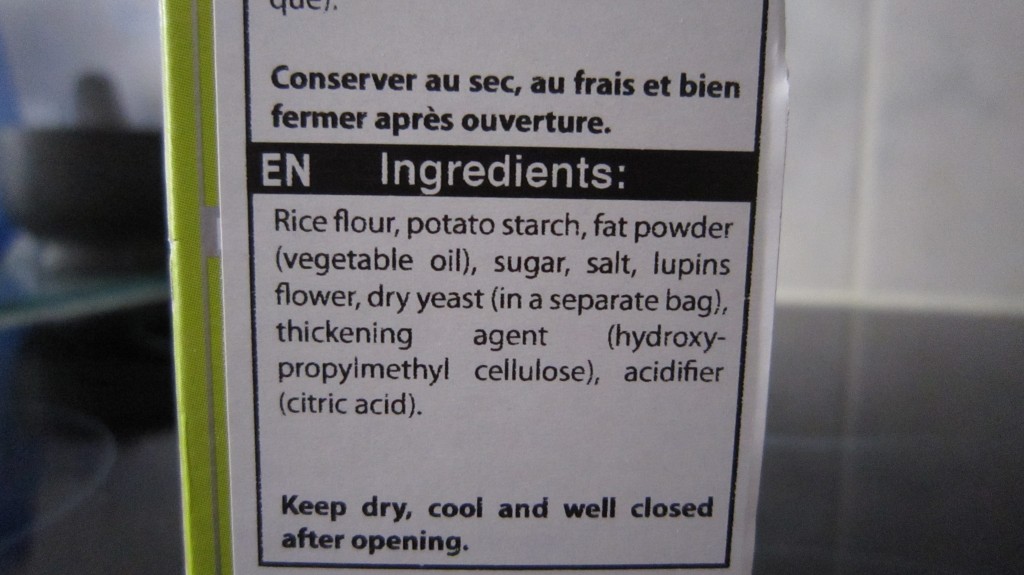 The pasta wasn’t much better. I cooked it for the group I was staying with (all gluten-eaters), and it tasted awful, even though they were all too polite to say so. It wasn’t “meh, I could eat this”, it was truly awful. I had to douse it in butter and cheese to take away the taste.

I also tried the pancake/crepe mix that they sold, but was bemused to discover that the Belgians don’t consider egg to be an allergen. 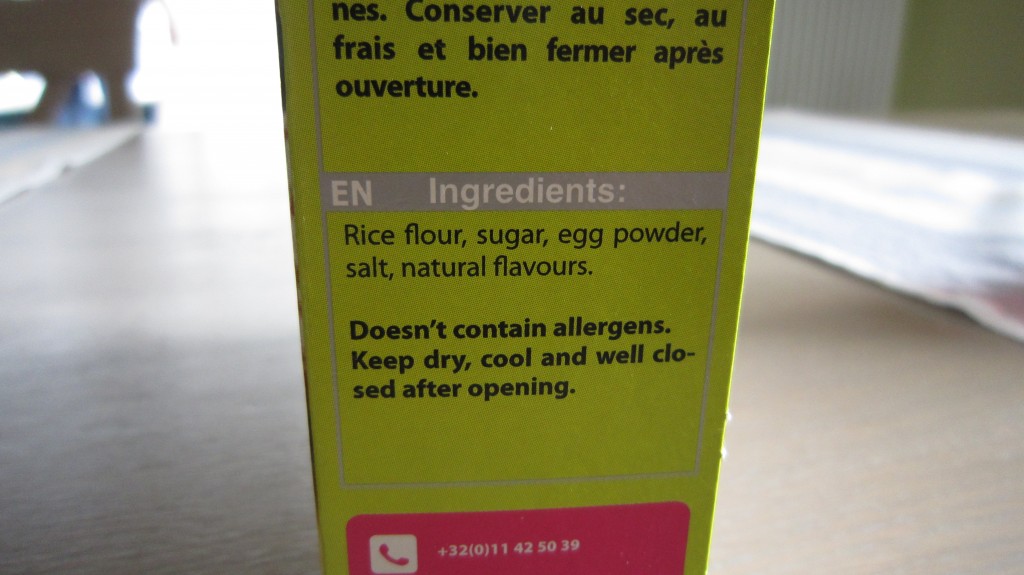 No allergens here! Apart from that one.

It tasted ok – about as ok as you would expect from using just rice flour.

I was only there for 4 days, and being in a lovely self-catering chalet, there was no real need for me to brave eating out. I very much doubt I would have been able to find anything I could eat, or find any place that I could be sure wouldn’t poison me. Even though I speak French, I have found that it doesn’t matter how well you explain your needs, if the waiting staff/chefs don’t understand coeliac disease you are putting yourself at risk with even the most well-meaning restaurant. For a 4 day holiday, I wasn’t going to risk it.

Belgium clearly has a long way to go in catching up with the rest of Europe. I imagine that if you lived closer to a large city (i.e. Brussels) there may have been a better variety, but coeliac disease doesn’t discriminate according to where you live. Plus in a country with so much exposure to gluten, I imagine we’ll be seeing a steep rise in coeliac diagnoses. This trip has reminded me how fortunate I am to be a coeliac living in London, a city with such a wonderful variety of products and restaurants to choose from, and if I ever return to Belgium, I’ll be sure to pack enough food to last the trip!

Have you been to Belgium recently? How hard did you find eating gluten-free?