Oats are a funny one for us coeliacs. While they don’t actually contain any gluten, they are often contaminated with gluten during the milling process. So coeliacs have to buy “pure” or uncontaminated oats. However, a further delightful twist is that they contain a protein, avenin, which a small section of the coeliac population will react to anyway. That’d be me, then.

Finding oat-free muesli or granola is a bit tricky, because I also can’t stand raisins, currents, sultanas or any other incarnation of that unholy being, the dried grape. It’s the one area where I allow myself to be fussy. So I have to make my own. But what do you use instead of oats?

I was in the Malvern Hills in July for Camp Quest, a summer camp that I run, and I stopped in at a local health shop, as they can always be an Aladdin’s cave of wondrous gluten-free surprises. Well, I wasn’t disappointed. Not only did I find brown rice flakes and buckwheat flakes, I found quinoa flour (that didn’t cost an arm and a leg) and tapioca flour (ditto). For a large pack of each of them by bill came to £11, which all things considered, isn’t bad.

Now, unfortunately, in today’s haste to make granola, I messed up and put the dried fruit in before it had been baked. Dear blog readers, don’t do this. The fruit goes in at the end! It really does! D’oh. 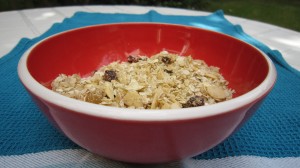 (Can use 300g gluten-free oats instead)

75g butter, margarine, or oil of your choice

The next few ingredients are all optional, you can use all of them, or any combination or add your own!

Melt the butter and agave nectar together in a saucepan until combined. Add cinnamon if preferred.

Combine dry ingredients (everything except the fruit!) and then pour the melted butter over them. Stir until incorporated.

Spread out the mixture onto a baking tray and bake in the oven for 10-15 minutes or until browned. Stir occasionally, so it doesn’t stick.